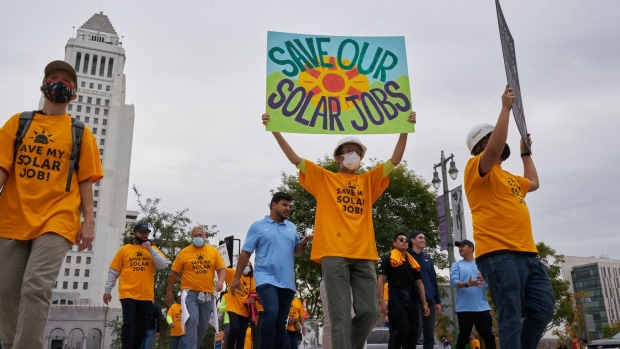 (Bloomberg) -- California regulators are delaying a vote on a controversial proposal to slash incentives for home solar systems as they consider revamping the measure.

California Public Utilities Commission President Alice Reynolds has asked for more time to consider making changes to the plan after getting feedback from solar companies, environmental groups, consumer advocates, utilities and other parties, according to a notice filed Thursday with the regulator.

“This highlights just how politically sensitive this proceeding is and how difficult it is to substantially alter the economics of a cottage industry that has grown to gargantuan proportions,” said Paul Patterson, a utility analyst at Glenrock Associates.

Shares of Sunrun Inc., the largest U.S. solar rooftop installer, rallied on the news to pare some of their earlier losses. They closed down 7%.

California Governor Gavin Newsom last month called for the commission to make changes to the proposal that would sharply reduce incentives and levy new fees for residential solar customers. The plan has drawn fire from solar installers, some environmental groups and other elected officials who say it would decimate California’s residential solar market.

Utilities, their labor unions and consumer advocates have come out in support of the changes, which they say would help reduce utility bills for those who can’t afford or aren’t able to install rooftop solar while requiring solar customers to pay more of their share of the costs of supporting the electric grid.

California’s incentives helped spur the installation of 1.3 million home solar systems in the state, about 45% of the nationwide total.