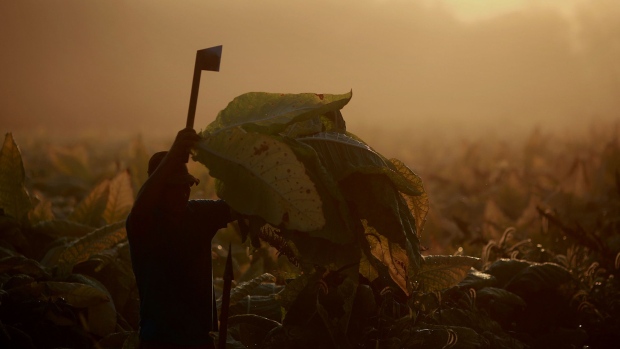 The silhouette of a worker is seen harvesting Burley tobacco at Tucker Farms in Shelbyville, Kentucky. compared to last season. , Photographer: Luke Sharrett/Bloomberg

(Bloomberg) -- California, through the Golden State Tobacco Securitization Corporation, is getting ready to sell $1.8 billion of high-grade bonds on Sept. 30 to refinance older debt backed by the landmark tobacco settlement, according to deal documents.

The bonds are federally taxable but exempt from California income taxes. Jefferies and Citigroup act as joint senior managers.

The state is pledging to cover debt service if the settlement revenue falls short, which provides more security to investors. Ratings of the new bonds are based off the state’s credit.

California expects that revenue from the settlement, which draws from sales of tobacco, to cover debt service. IHS Global projects that the average cigarette consumption from 2021 through 2046 to decline at an annual rate of about 3.4%, bond documents show.

Potential buyers would be those who typically invest in California bonds, said Terry Goode,  a senior portfolio manager at Wells Capital Management. Because the debt is backed by state appropriation, “you’re not going to get any additional spread for the tobacco component,” he said.

“We haven’t had a lot of large taxable deals,” Goode said. “People are starved for taxable paper.”

An existing bond enhanced by the state’s backing with a 3.115% coupon that’s due in 2038 traded Wednesday with an average yield of 2.91% or 162 basis points over benchmark Treasuries, data compiled by Bloomberg show. A bond with a 2034 maturity is seen yielding in the area of 150 basis points over benchmark Treasuries, according to a pre-marketing wire viewed by Bloomberg.