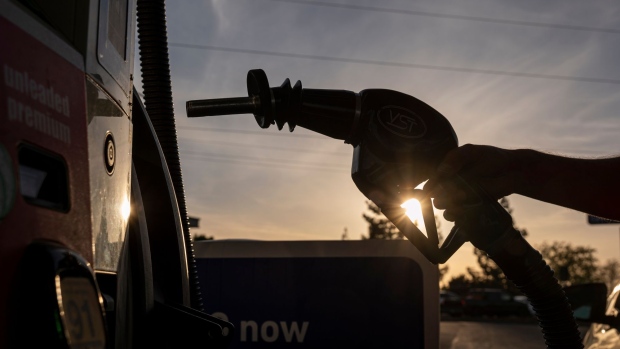 A driver at a gas station in Sacramento, California. , Bloomberg

(Bloomberg) -- California Governor Gavin Newsom’s proposal to give $400 to every car owner to offset record-high gasoline prices has prompted criticism that it undercuts the state’s aggressive climate goals.

Under the $11 billion plan unveiled Wednesday, every owner of a registered car in California – including owners of electric vehicles – would receive a tax refund in the form of a $400 debit card regardless of their income. An owner of more than one registered vehicle would receive $800.

If approved by the California legislature, a millionaire owner of two Range Rovers that get 13 miles per gallon would receive $800 as would the owner of a pair of Tesla electric cars who does not pay fuel taxes. Someone who relies on a bicycle for transportation, on the other hand, would be left empty-handed.

“The $400 for fossil fuels makes little sense except for funds that benefit low-income Californians only,” Daniel Kammen, a professor of energy at the University of California at Berkeley and a senior advisor at the United States Agency for International Development, said in an email. “Overall we do not want to make fossil fuels more affordable. The climate damage they cause, and the security problems they cause have been made starkly clear by fires worldwide, and by the Russian petrostate invasion and resulting price volatility.”

The average price of gasoline in California on Friday was $5.90 a gallon, according to the American Automobile Association.

The governor's office did not immediately respond to a request for comment. The initiative also would offer $750 million in grants to transportation agencies to provide free bus and train transit to 3 million riders for three months. The state would spend $600 million to pause part of the sale tax on diesel fuel for a year and $523 million to delay increases in gas and diesel excise taxes. Newsom called for $500 million to be spent on projects to encourage bicycling and walking and for the fast-tracking of a $1.75 billion portion of his proposed $10 billion zero emission vehicle budget.

Some on social media saw the fuel subsidies as undermining efforts to decarbonize transportation.

Peter Gleick, co-founder of the Pacific Institute, an Oakland, California-based water research organization, posted that, “Newsom's proposal, [though] issued in the spirit of helping deal with high gas prices, will worsen greenhouse gas emissions, disproportionately benefit the rich, do nothing to encourage EVs or efficient cars, & encourage more, not less driving.”

Other activists were measured in their reaction to Newsom’s proposal. Laura Deehan, state director of climate advocacy group Environment California, said in an email that she favored  the plan’s transit and electric vehicle provisions and noted that the $400 payments will “help a lot of people right now.”

“But it's just a Band-Aid, and not a very good one,” she added. “To permanently protect ourselves, we need to double down on the investments that will end our dependence on fossil fuels.”