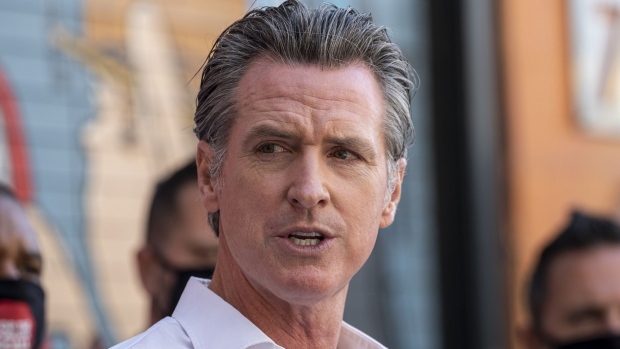 (Bloomberg) -- California Governor Gavin Newsom is calling for the Democratic-controlled state legislature to consider his proposal for a windfall tax on oil companies as gas prices in the state stay high.

Newsom on Friday said that he would call for a special session for the state legislature to consider his proposal for the levy. He says revenue stemming from the proposed windfall tax would go directly back to California taxpayers through refunds or rebates as a way to alleviate the burden of higher costs.

“I’m calling for a Special Session to address the greed of oil companies,” he said in a Twitter post. “Gas prices are too high. Time to enact a windfall profits tax directly on oil companies that are ripping you off at the pump.”

California’s legislature is led by Democrats, and legislative leaders like Senate President pro Tempore Toni G. Atkins and Assembly Speaker Anthony Rendon have voiced support for the proposal. Newsom is calling for the special session to start Dec. 5, according to his office.

“A solution that takes excessive profits out of the hands of oil corporations and puts money back into the hands of consumers deserves strong consideration by the Legislature,” Atkins and Rendon said in a statement on Friday. “We look forward to examining the Governor’s detailed proposal when we receive it.”

Californians pay the most for gasoline in the country, with prices surging to $6.39 a gallon as of Friday, much higher than the national average of $3.89, according to data from auto club AAA.

The Western States Petroleum Association, a trade group for the petroleum industry with member companies like Chevron Corp., said in a statement that Newsom’s anti-oil policies should be examined for driving costs up. Earlier this year, California’s top air regulator effectively banned the sale of gas-powered vehicles in the state by 2035.

“If this was anything other than a political stunt, the governor wouldn’t wait two months and would call the special session now before the election,” said Kevin Slagle, spokesperson for the association. “This industry is ready right now to work on real solutions to energy costs and reliability if that is what the Governor was truly interested in.”

On Friday, California residents were set to start receiving “middle class” tax rebates of as much as $1,050, as part of a $17 billion inflation relief package approved earlier this year.

(Updates to add comment from legislative leaders and trade group)