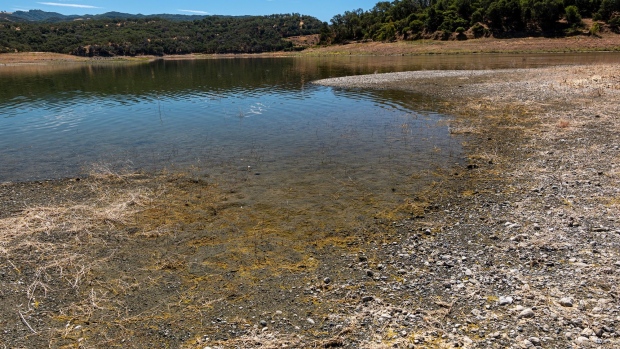 Lake Mendocino during a drought in Mendocino County, California, US, on Wednesday, Aug. 10, 2022. California water prices are at all-time high as a severe drought chokes off supplies to cities and farms across the Golden State. , Bloomberg

The state’s driest three-year period on record resulted in the crop revenue losses after growers left a total of 1.3 million acres unplanted over 2021 and 2022 as compared with 2019, according to a study commissioned by the California Department of Food and Agriculture. That’s the most idled acreage in recent memory, with effects cascading down the food industry.

California’s Central Valley -- which grows about a quarter of all US food, including 40% of fruits and nuts -- is bearing the brunt of the losses so far. Things could still get worse, with the state’s southern farming areas reliant on water from a shrinking Colorado River likely to see more fallowing in 2023, said Josue Medellin-Azuara, a University of California Merced professor who led the analysis.

“Strategic short term land idling was the most common cropping decision adaptation in this drought,” researchers said in the report. “Some crops such as rice, and other field and grain crops showed extensive idling,” while beef and milk productions were “lower than they would have been.”

The estimated 752,000 acres of fallowed fields in 2022 alone represent nearly 10% of California’s irrigated land examined by researchers. Growers also faced extra energy costs due to the need to pump water. The study is based on “water” years that run from October through September.

California’s so-called senior water rights over other states have helped shield farmers who depend on the Colorado River from severe water cuts.

But with the basin that provides water for 40 million people from Denver to Los Angeles contending with a megadrought, states are being tasked by the US government to figure out a plan to conserve water. Federal officials also are considering action that would allow them to mandate restrictions.

“The pressure is on for cutbacks,” Medellin-Azuara said in a telephone interview. Looming water restrictions for farming in Southern California and Arizona are especially of concern because those regions grow lettuce and other vegetables heavily relied by the rest of the country during winter months.

At least 70% of irrigated land in the Colorado River Basin is used to grow feed for livestock, and the drought already is boosting prices for such crops, according to the study.

(Updates with financial losses in first paragraph, details throughout.)