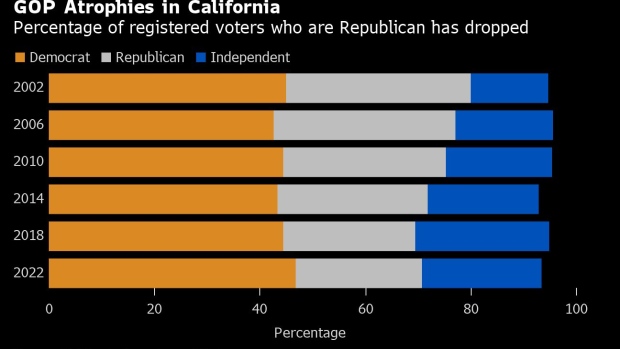 Gavin Newsom, Democratic candidate for governor of California, speaks during a primary election watch party in San Francisco, California, U.S., on Tuesday, June 5, 2018. Lieutenant Governor Newsom and Republican businessman John Cox won the most votes in California’s gubernatorial primary, advancing to a general election that will test the state’s position as leader of the resistance to President Donald Trump. , Bloomberg

(Bloomberg) -- The fate of Democrats vying for congressional seats in November is uncertain. But Election Day almost certainly will result in a great night for one party member: California Governor Gavin Newsom.

The first-term Democrat, who easily beat back a recall attempt less than a year ago, is facing nominal opposition in his re-election bid from a rural Republican farmer in a liberal bastion that hasn’t elected a GOP candidate to statewide office since 2006. Released from the need to conduct a traditional campaign, he’s instead raising his national profile.

Through pointed tweets, news conferences and posts on Donald Trump’s Truth Social platform, Newsom has taken to expressing the frustration of Democrats enraged by the rollback of progressive priorities. He’s trolled the conservative governors of Florida and Texas with ads in their states touting how California is a haven for reproductive rights and gun limits. In the past week alone, he’s blasted Indiana’s new abortion restrictions and released a video he called “Hypocrite or Fraud” about conservative leaders’ stance toward Covid-19 vaccine mandates.

Such attention-grabbing tactics have launched the leader of the most-populous state into the conversation about potential Democratic presidential nominees should Joe Biden not run again, even as Newsom says he has “sub-zero interest” in entering the 2024 race. They’ve also made him a target for Republican officials and a foil to GOP governors such as Texas’s Greg Abbott and Florida’s Ron DeSantis, who himself is building an outsized national presence.

They have a seemingly easy punching bag in California, home to the country’s most expensive residential markets, the largest percentage of those in poverty, and some of the highest gasoline prices. Its population has fallen for the first time in more than a century, with many movers decamping to Texas and Florida. Yet the Golden State’s economy -- the fifth-largest in the world -- is still strong, Newsom is enjoying a record budget surplus and, importantly, he has the support of a Democratic base at home, giving him room to talk on national issues.

Unless Newsom makes a crippling mistake, the 54-year-old is “pretty secure” in his re-election, said Mindy Romero, director of the Center for Inclusive Democracy in Sacramento. For the governor and his advisers, she said, it’s about maximizing opportunity.

“The question is: How do we run this campaign to get the most advantage out of it for our party in the state and potentially our party nationally and for his own political future?” she said.

Nathan Click, spokesperson for the Newsom campaign, said the governor is fighting for Democrats and that the “contrast couldn’t be clearer” between California and Republican-led states on issues such as abortion, guns and climate change.

“For Governor Newsom, this is a moment where Democrats need to be taking the fight to the GOP and calling them out for taking away Americans freedoms -- and that’s exactly what he is doing,” Click said in an emailed statement.

While the former San Francisco mayor is widely seen as having presidential ambitions, he has taken pains to show allegiance to Biden, who allies say is readying plans to launch a re-election bid after a string of policy successes. Newsom, too, has longtime ties to Vice President Kamala Harris, a Bay Area native, raising potential complications should she plan to run.

He also has some catching up to do when it comes to national recognition, said Fernand Amandi, a Democratic strategist and pollster in Miami, who said the Florida ad made a splash only with political junkies.

Whatever happens, Newsom is well-positioned to capitalize on his stature and shape the national party, said Mike Madrid, former political director of the California Republican Party. The governor enjoys a broad advantage in a state where Democrats outnumber Republicans by nearly two to one.

He also has plenty of money: As of Aug. 1, Newsom had about $24 million in campaign cash on hand from high-profile donors such as Steven Spielberg and former Google CEO Eric Schmidt. His Republican challenger, state senator Brian Dahle, had just $307,000.

“Unless Democrats are somehow able to hold on, Gavin Newsom is going to be the biggest winner nationally on election night,” Madrid said. “He’s going to win re-election by 20 points, and no Democrat is going to do that.”

Newsom won his first term in 2018 as governor with about 62% of the vote. That’s the same percentage that rejected removing him from office in September’s recall election. The recall movement largely stemmed from blowback to his coronavirus restrictions, exacerbated by the governor flouting his own Covid rules by attending a swank Napa Valley dinner party.

But the recall backers also focused on issues such as crime and cost of living, social problems that have become economic ones for California. Over the past few years, prominent companies such as Tesla Inc., Oracle Corp., Hewlett Packard Enterprise Co. and Charles Schwab Corp. relocated their hubs to the cheaper and more tax-friendly Lone Star state. Even before the pandemic, California ranked high among states from which people moved, and the trend accelerated, an analysis of United Van Lines data by the Federal Reserve Bank of Chicago shows.

Texas and Florida ranked as the No. 1 and No. 3 destinations for California expats in 2020 and 2021 -- Washington was second -- and Newsom has been promoting his state as a better alternative. His ad in Florida urged residents to “join us in California, where we still believe in freedom.” He’s proposed incentives for companies to move from areas with restrictive policies on abortion and LGBTQ+ rights, and supports extending $1.65 billion in tax credits to lure Hollywood studios to film at home instead of in anti-abortion states.

He has caught the attention of Republicans such as Abbott, who taunted Newsom at last week’s Conservative Political Action Conference and touted Texas’s business wins. For the GOP, the home of Hollywood and Silicon Valley is an “easy foil” and “a scapegoat” to demonstrate what’s wrong with Democrats, said Jessica Taylor, governors editor at the Cook Political Report.

It’s too speculative now to determine if Newsom, who emerged from the recall even stronger, would find his background a disadvantage if he vies for president, she said. “What Democrats have to do is not sort of alienate rural voters and blue collar workers, and a governor of California -- that might be a little hard,” she said.

For now Newsom has little to lose. His ratings in California -- about 52% approval among likely voters -- are “fairly stable,” said Dean Bonner, associate survey director for the Public Policy Institute of California. Meanwhile, independents, which comprise almost the same share of voters as Republicans, tend to lean toward Democrats, he said.

And even if he doesn’t intend to run for president in 2024, it makes sense for Newsom to raise his profile nationally, said some consultants and analysts.

“Until he eats a corn dog at the Iowa State Fair, or until he stands in someone’s living room in New Hampshire, he’s just having fun and tilting at the windmills of presidential politics while running for re-election,” said David McCuan, chair of the political science department at Sonoma State University.