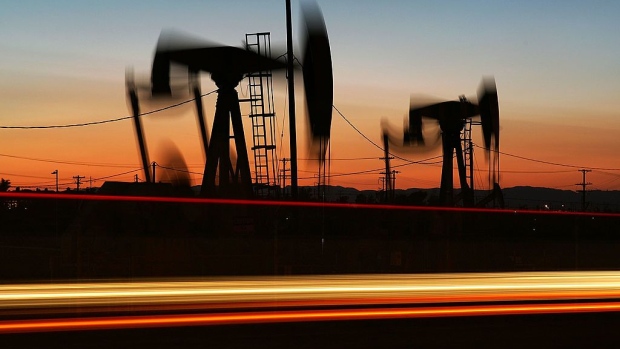 CULVER CITY, CA - APRIL 25: Car lights are seen streaking past an oil rig extracting petroleum as the price of crude oil rises to nearly $120 per barrel, prompting oil companies to reopen numerous wells across the nation that were considered tapped out and unprofitable decades ago when oil sold for one-fifth the price or less, on April 25, 2008 in the Los Angeles area community of Culver City, California. Many of the old unprofitable wells, known as 'stripper wells', are located in urban areas where home owners are often outraged by the noise, smell, and possible environmental hazards associated with living so close to renewed oil drilling. Since homeowners usually do not own the mineral rights under their land, oil firms can drill at an angle to go under homes regardless of the desires of residents. Using expensive new technology and drilling techniques, California producers have reversed a long decline of about 5 percent annually with an increased crude flow of about 2 1/2 million barrels in 2007 for the first time in years. (Photo by David McNew/Getty Images) , Photographer: David McNew/Getty Images North America

(Bloomberg) -- California will move to block oil drilling within about a half-mile of homes, hospitals and schools, a step long sought by environmental-justice advocates in what was once one of the largest crude-producing U.S. states.

Governor Gavin Newsom announced the proposed regulation in the city of Wilmington, one of many Los Angeles-area towns where oil wells abut homes. While other oil-producing states already require residential buffer zones, efforts to create such setbacks in California have repeatedly failed in the face of industry and union opposition.

“We don’t see oil in our future -- we don’t,” Newsom said at a press conference. “A cleaner, brighter, more resilient future is in our grasp.”

The new setback proposal, from California’s oilfield regulating agency, must still survive a process of public comment and economic study before it is formally adopted. It would also tighten air pollution controls on the state’s existing wells that lie within 3,200 feet of homes.