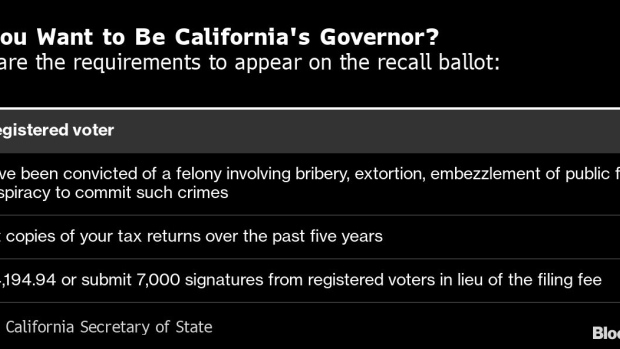 A Kodiak bear sits behind California Republican Gubernatorial candidate John Cox as he speaks during a campaign rally in Sacramento, California, on May 4, 2021. , Photographer: Justin Sullivan/Getty Images

(Bloomberg) -- What do a bail bondsman, a YouTube personality and a former Congressperson have in common?

They may all be deemed qualified candidates to replace Governor Gavin Newsom in California’s upcoming recall race. Ahead of the Friday evening deadline to file the requisite paperwork, about 80 people have said they want to run. Given the state’s permissive rules, many of them are likely to make it on the ballot for the Sept. 14 special election.

Voters will first have to determine whether to recall Newsom, a Democrat with one year left in his first term. A simple majority of yes votes will result in his ouster. Whoever wins the most votes on the second question on who should replace him -- even if less than 50% -- would become the next governor.

A circus-like atmosphere dominated the previous recall in 2003, the first such race in California’s history. It resulted in mega-star Arnold Schwarzenegger taking the helm of the world’s fifth-largest economy. Political strategists expect a similar spectacle, which poses a challenge for established politicians trying to grab voters’ attention. Even John Cox, the Republican candidate in the 2018 gubernatorial race, has resorted to bringing a 1,000-pound bear, angering animal rights activists, as well as an eight-foot-high ball of trash to his events.

But celebrity candidates such as reality television personality Caitlyn Jenner are finding that popular recognition doesn’t automatically mean votes. The Republican who’s selling items such as a hat emblazoned with “Wake Up the Woke” on her campaign website drew support from just 6% of registered voters in a University of California at Berkeley Institute of Governmental Studies poll.

“Because of her celebrity status, she gets attention, but does that translate into people saying, “Yes, I want you as the replacement for Governor Newsom, because I think you’ll do a better job?’” said Tim Rosales, a Republican strategist who previously advised Cox and is currently not working on any recall campaigns. “I don’t know that anybody has made that case to that second question in a really compelling way yet.”

Over the next nine weeks, the pressure will be on for candidates to make their case and for Newsom to galvanize his base -- at a time outside of a normal election cycle, said Mindy Romero, founder of the Center for Inclusive Democracy at the University of Southern California. The caravan of candidates may lead to more voter confusion, she said.

“People have to sift through all of those names,” she said. “It’s just a lot of information that’ll be swirling in a really short amount of time.”

On Saturday, the Secretary of State’s office will post the list of candidates who have fulfilled the requirements to appear on the ballot, which include being a registered voter and submitting copies of recent tax returns.

They may also share the ballot with Kevin Paffrath, a YouTube personality with 1.7 million subscribers who has been offering cash giveaways at his rallies. The 29-year-old Democrat said he would call in the National Guard to end the state’s chronic homeless problem in 60 days.

“Our governor uses basically crusty bandages from the dollar store that don’t even have any stick left for his policies,” Paffrath said by phone.

Nickolas Wildstar, a rapper and digital marketing specialist from Fresno, has previously run for city council, mayor and governor. In February he was convicted on charges of contempt of court and violating a court order stemming from filming his appearances for traffic citations. He was sentenced to a year of probation and community service, an experience that underscores how much he’s willing to stand up for Californians, he said in an interview.

“They want someone that’s going to hold our elected officials accountable,” Wildstar said.

Bail bondsman Diego Martinez vows to widen freeways and triple logging to clear overgrown timber from power lines. Conservative radio host Larry Elder, who bills himself as the “Sage from South Central,” is running. So is John R. Drake, a 20-year-old college student who would be the youngest governor in U.S. history.

“Over the past 50 years we’ve had nothing but multimillionaires in the governor’s office, yet the quality of life has plummeted and the value of labor has stagnated,” Drake said in an interview.

It took months and a misstep by Newsom for California to reach this point. The campaign to recall the politically ambitious former mayor of San Francisco started before the coronavirus pandemic, but grew in momentum as people chafed under his attempts to control it. Newsom was criticized for dining at a luxury restaurant, maskless, last November while telling Californians to avoid such social interactions.

Last month, the state confirmed that the recall proponents had collected enough verified signatures -- about 1.7 million-- to trigger an election that is estimated to cost $276 million to hold. The lieutenant governor, a Democrat, then scheduled the race after the Democratic-led legislature passed a bill to speed up the process.

Why California’s Governor Is Facing a Recall Election: QuickTake

Public sentiment currently favors Newsom, with 57% of likely voters saying that they would oppose his recall, according to a Public Policy Institute of California poll. Most virus-related restrictions were lifted June 15, and people have seized on the turnaround by flocking to Disneyland and snapping up dinner reservations. However, in a sign of how quickly the outlook could change, Los Angeles County announced this week it’s reimposing the indoor masking mandate for even the vaccinated amid a rise of infections.

The more candidates, the better for Anne Hyde Dunsmore, a campaign manager behind the recall, because it means more voters will be motivated to dislodge Newsom from office by having someone to support, she said. “Our single focus is getting 50% plus one on question number one, which is recall or no recall of Gavin Newsom,” she said.