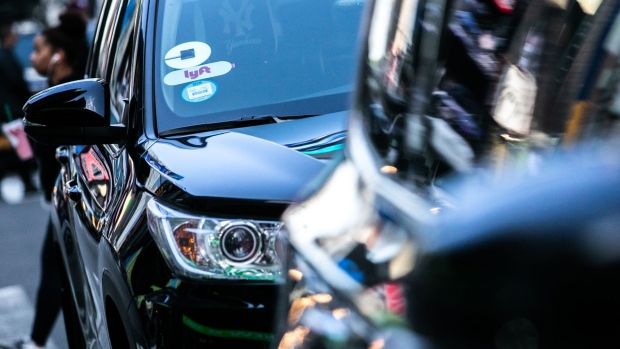 Uber Technologies Inc. and Lyft Inc. stickers are displayed on a vehicle in the Time Square neighborhood of New York, U.S., on Wednesday, May 8, 2019. , Bloomberg

The California Senate passed a bill that could force Uber and other gig economy giants to reclassify their workers as employees. Such a change would secure labor protections for thousands of people across the state and deal a significant blow to companies that built multi-billion dollar businesses on independent contractors.

Under the new law, Assembly Bill 5, people in California could generally only be considered contractors if the work they’re doing is outside the usual course of a company’s business. Companies like Uber Technologies Inc. and Lyft Inc., which rely on armies of drivers to service their customers, would likely fail that test without transforming how they do business. Employees are entitled to a minimum wage and overtime pay, neither of which is a common protection within the gig economy.

The cost could be significant and comes at a delicate moment for the two largest companies in the industry. Lyft and Uber are struggling to staunch accelerating losses and cratering stock prices. Just hours before the bill passed, Uber Chief Executive Dara Khosrowshahi said he was cutting more than 400 technical employees after eliminating a similar number of jobs earlier in the summer. The state’s assembly has already approved a version of the bill and it is expected to pass the same legislation in a later vote.

“The State Senate made it clear: your business cannot game the system by misclassifying its workers,” Assemblywoman Lorena Gonzalez, the Democrat who authored the bill, said in a statement. “As lawmakers, we will not in good conscience allow free-riding businesses to continue to pass their own business costs onto taxpayers and workers. It’s our job to look out for working men and women, not Wall Street and their get-rich-quick IPOs.”

Victory for all those who've been missclassified. Too many employers passed their responsibility on to taxpayers & responsible businesses, straining our state & local safety net. Very glad #AB5 passed state senate tonight. 29-11.

Giving employee status and benefits to workers in California would cost Uber and Lyft an additional US$2,000 to US$3,600 per driver annually, according to research from Barclays Plc and Macquarie Capital. That would be as much as $500 million for Uber in the state each year. California often sets the legislative tone for other states to emulate, and the costs could quickly add up if more follow suit.

The largest companies in the gig economy have been trying unsuccessfully since last year to secure concessions that would forestall a reclassification of their workers. The companies appealed to state lawmakers to shield them from the new standard and have held talks with union leaders and the governor’s office.

“We are now witnessing the dashing of the American dream,” Senator Jim Nielsen, a Republican, said on the Senate floor.

Governor Gavin Newsom, a Democrat who’s seen as friendly to both labor and technology, has urged the two groups to find a compromise. In a Labor Day editorial, Newsom wrote that he was pursuing ways for ride-hailing drivers to “increase their wages and benefits, maintain the flexibility many enjoy and form a union,” indicating that discussions of a deal were ongoing. The governor also said he supported the bill, a signal that it may soon become law without a special exception for the gig economy. A version of the bill passed the state Assembly in April.

Corporate efforts to secure a legislative deal may continue past the current legislative session, which ends this week. Meanwhile, gig companies are also setting up a fallback. Uber, Lyft and DoorDash Inc. each committed $30 million last month to potentially put the issue before voters as a 2020 ballot referendum.

The California showdown has become the leading battleground in the U.S. debate over the rights of gig workers. Several Democratic presidential candidates endorsed the California bill and are backing proposals that would replicate the approach on a national scale.

“The passage of this legislation could be a watershed in the reduction of inequality in society and the workplace,” said William Gould, Stanford University law professor and former National Labor Relations Board chairman. “Some of this depends upon the willingness of organized labor, plaintiffs lawyers and government to stand up and protest. On this, we must wait and see.”