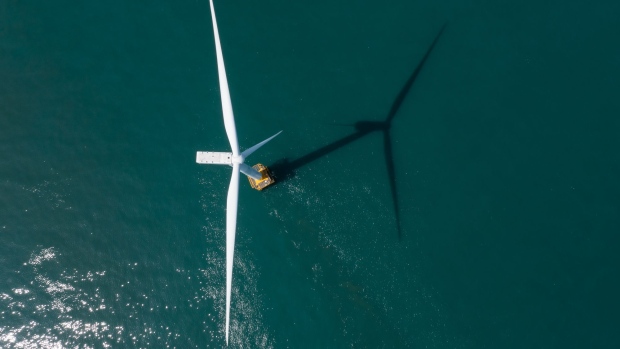 A wind turbine operates at Southwest Offshore Wind Farm in Buan, South Korea, on Thursday, March 25, 2021. The wind farm complex in the Southwest Sea will be expanded to 2.46 GW after 2027, according to Korea Offshore Wind Power Corp, a special purpose company formed by state-run Korea Electric Power Corp. and six other generators. Photographer: SeongJoon Cho/Bloomberg , Bloomberg

(Bloomberg) -- California set an ambitious target to develop offshore wind, a key part of the state’s plan to get all its electricity from carbon-free sources by 2045.

The Golden State will seek to install as much as 5 gigawatts of turbines off the Pacific coast by 2030, and as much as 25 gigawatts by 2045, under a plan approved unanimously Wednesday by the California Energy Commission.

The target goes beyond Governor Gavin Newsom’s call last month for the state to install at least 20 gigawatts of turbines at sea by 2045. While offshore wind development on the US West Coast is trailing efforts in the Atlantic, California’s move may spur additional plans for the Pacific, according to David Hochschild, chairman of the commission.

“I think what we do here matters more than we realize,” Hochschild said at a meeting. “We have a great track record of starting things in California, and what we’re doing today on wind is yet another step.”