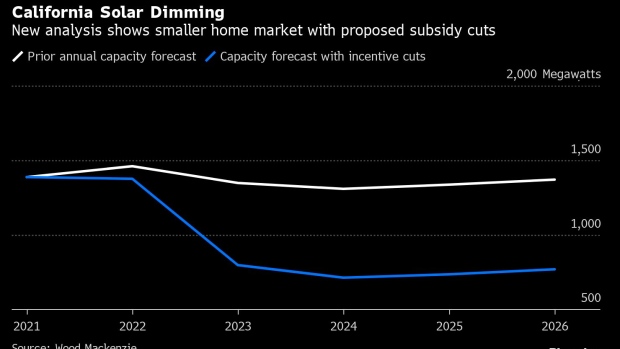 (Bloomberg) -- California’s residential solar market would be cut in half by 2024 if state regulators move forward with a proposal that would slash incentives and add monthly fees for rooftop systems, according to new analysis from Wood Mackenzie, an energy research firm.

The proposed changes to the state’s so-called net energy metering tariffs would more than double the payback periods for home solar to far beyond 10 years, according to Bryan White, a research analyst at Wood Mackenzie and co-author of the report. That would make residential customers less likely to invest in solar systems and installers less motivated to sell them, White said.

The analysis comes as the debate over the fate of the solar subsidies in the largest U.S. rooftop market has heated up. A number of California political heavyweights including Governor Gavin Newsom, a Democrat, former Republican Governor Arnold Schwarzenegger and Democratic Senator Dianne Feinstein have all criticized the solar proposal and have called on state regulators to make changes.

Solar advocates have held rallies, enlisted celebrities and launched a new ad campaign to fight the proposed reforms. California’s three big investor-owned utilities, labor unions and their allies have put forward their own lobbying effort in support of the changes, which they say will help address a cost shift where those who can’t install or afford home solar systems end up paying for the green incentive.

The less attractive economics of adding a home solar system will impact installed capacity, which is expected to fall to just over 700 megawatts in 2024, roughly half of 2021 volumes, White said. That would mark the lowest annual output for California since 2014.

State regulators are expected to vote on the proposal in the coming weeks.