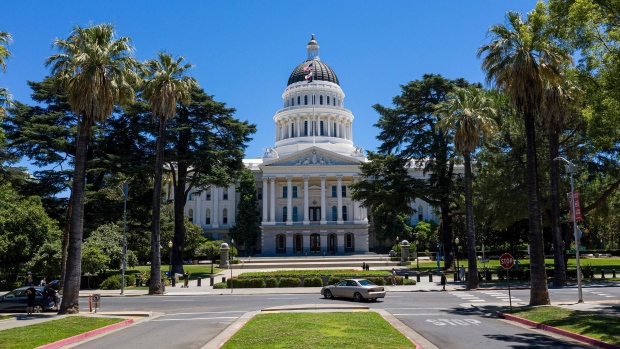 The California State Capitol building in Sacramento, California, U.S., on Wednesday, July 7, 2021. California has reinstated a mask mandate for all lawmakers and employees at the state capitol regardless of vaccination status following an outbreak of nine Covid-19 cases there, reported the San Francisco Chronicle. , Bloomberg

(Bloomberg Government) -- Gun manufacturers that market kiddie versions of firearms in California would risk being sued under legislation cleared Thursday for the desk of Gov. Gavin Newsom.

California “has a compelling interest in ensuring that minors do not possess these dangerous weapons,” according to the legislation. An Assembly analysis of the bill noted the basis of opposition by the National Rifle Association’s Institute for Legislative Action, which argued that “minors can and do possess and use firearms for a variety of lawful purposes.” California’s vote came as another blue state rushed to finish its own package of gun restrictions in response to a US Supreme Court decision striking down New York’s concealed-carry law.

New York lawmakers were scheduled to vote Thursday on a package of legislation that would add new restrictions on gun ownership.

The New York measures would:

Other bills ready for the signature of Newsom (D) would allow citizen lawsuits against makers and sellers of untraceable homemade weapons known as ghost guns (S.B. 1327); require a state license to manufacture four or more firearms per year (A.B. 2156); and allow lawsuits for violating a California-created firearm industry code of conduct (A.B. 1594).

“Our country is in a gun violence crisis and these bills take bold action to save lives,” said Krystal LoPilato, a volunteer leader with the California chapter of Moms Demand Action.

“Any pretext of thoughtful consideration of proposed laws is history,” Michel, also a senior partner with Michel & Associates PC in Long Beach, Calif., said in an email.

To contact the editors responsible for this story: Katherine Rizzo at krizzo@bgov.com; Tina May at tmay@bloomberglaw.com