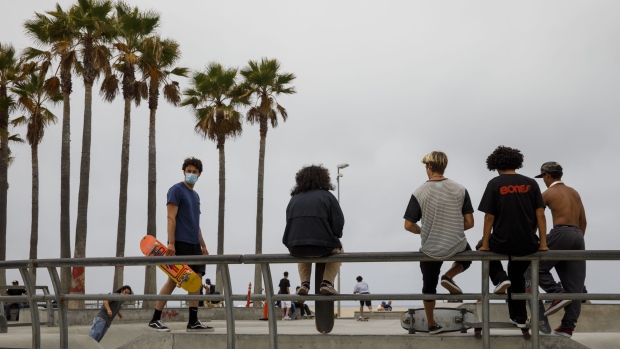 Former Governor Jerry Brown coined that term in May 2011 as he pushed for an extension of tax increases to chip away at the mounting burden from payment deferrals, internal borrowing and bonds sold to keep the state afloat in a previous fiscal crisis. It took until this year for the last block of the wall to disappear.

In the face of a $54.3 billion two-year deficit driven by the coronavirus pandemic, the $133.9 billion budget for the fiscal year beginning Wednesday will start to build that wall up again. It defers $12.9 billion in payments to schools and community colleges and borrows $9.3 billion from other funds to avoid steep cuts in the hope that Washington will send additional aid by October.

The blueprint that current Governor Gavin Newsom signed Monday entails some upfront pain. The state’s two higher-education systems will lose about $1 billion combined and $2.8 billion will be slashed from state employee compensation, which would be made up if the federal rescue happens. But the approach to put off cuts to protect residents most in need from the unprecedented crisis risks erecting a debt burden that may take years to dissipate.

“I would expect that California will develop another wall of debt as it tries to solve this budget gap,” said Jennifer Johnston, vice president and research analyst for Franklin Templeton Investments. “The question is just how excessive do they get?”

California joins other states raiding reserves and counting on hypothetical federal dollars to deal with the pandemic-induced downturn that has already resulted in the loss of more state and local jobs than were seen in the previous recession. States and cities will need $500 billion in additional federal aid over the next two years to avoid major economic damage, Moody’s Analytics said in a report released last week.

“Nearly overnight, the revenue drop from the Covid-19 recession knocked the constitutional level of school spending more than $10 billion below where it was in last year’s budget,” said H.D. Palmer, a spokesperson for Newsom’s finance department, who added that the K-12 spending deferrals are “to avoid significant reductions to school spending at this critical time.”

“Up to $5.7 billion of these deferrals can be eliminated if the federal government provides the state with additional fiscal relief – funding the governor will continue fighting for,” Palmer said.

A Democrat-backed bill that would give states and cities about $1 trillion has stalled in Congress. Still, many municipal credit analysts believe a round of stimulus will come considering the dire consequences without one.

“It makes sense that they don’t want to make drastic cuts to schools if they’re going to get additional aid from the federal government,” said John Ceffalio, municipal credit research analyst at AllianceBernstein, referring to California. “It’s not ideal, but it’s understandable.”

Brown, who left office in 2019, blasted what he called California’s “wall of debt” after the state deferred payments and used accounting gimmicks leading to nearly $35 billion of budgetary borrowing as of May 2011, according to state documents.

While the coming year’s spending plan doesn’t include deficit borrowing, the general fund is supported by loans from state departments and special accounts, such as a $500 million loan from the underground storage tank cleanup fund, $107 million from the labor and workforce development fund, and $77.7 million from Department of General Services, budget documents show.

The deal struck by Newsom and Democratic legislative leaders reflects a compromise between the governor’s May budget that called for immediate expense reductions in July absent $14 billion in federal aid and the lawmakers’ framework that triggered cuts only in October if Congress fails to pass a rescue package. They had to balance a $13.4 billion deficit this year and $40.9 billion in the next.

Under the agreement, should the federal government come through with $14 billion by October 15, the dollars will flow to priorities such as paying off the school deferrals. Officials will also draw down the state’s $16 billion rainy day fund by about half in the year starting Wednesday.

“Now is not the time to slash services, especially when Californians need their government the most,” Assembly budget chair Phil Ting said in statement Friday after the budget’s passage. “We learned from the Great Recession that deep cuts can prolong economic recovery and have no desire to repeat that.”

Franklin Templeton’s Johnston said she hopes that California’s leaders will return to the fiscal practices that helped propel the state’s standing among investors, while they grapple with the current uncertainty wreaked by the pandemic.

“That’s one difference about the way Covid has impacted state and local governments versus any recession. There was no gradual easing into it,” Johnston said. “It’s hard to model, and I think everybody is trying to figure out the rules as we go along.”