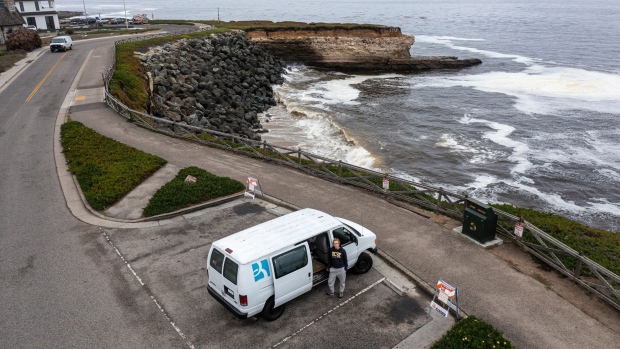 Odin Spalinger inside his van in Santa Cruz. , Bloomberg

(Bloomberg) -- A push by California’s public colleges to enlist tens of thousands of more students will face a common challenge in the Golden State: where to house them.

Like colleges around the country, California’s schools are under pressure to lure high school graduates as fewer seek a higher education. A national drop in enrollment since the start of the Covid-19 pandemic means institutions are fighting for a smaller crop of tuition-paying students.

The Golden State is home to some of the US’s most expensive real-estate, making the ultra-tight market a headwind for attracting those crucial college students in the coming years -– a surge that could further exacerbate the housing supply crunch.

“​​Everybody is participating in the same housing market and if there’s not enough, it’s like a game of musical chairs without enough chairs to sit on,” said Christopher Elmendorf, a professor at University of California, Davis.

Some schools have leveraged the private-sector’s interest in student housing, and many are in line to benefit from increased government funding for higher education. Decision-makers are also trying to dismantle regulatory log jams that have long-stymied housing projects. All the while, students are feeling the pinch: faced with sky-high rents and limited on-campus options, some have resorted to living out of cars or couch surfing with friends.

The University of California plans to add 23,000 students to its 10-campus system by 2030, and California State University -- the largest public four-year university system in the country -- aims to add 10,000 spots. UC officials noted that their expansion plans include “non-traditional, off-campus opportunities” while those at CSU applied for state funding to bring another 2,800 beds to campuses over the next several years, with 84% meeting the criteria for affordable rentals.

The big public university systems in the state have a diverse revenue stream, so increasing enrollment is more than just about financial health -- it’s core to their mission, said Emily Wadhwani, senior director at Fitch Ratings. “Their goal is to serve students in the state and to provide ongoing education opportunities,” she said. “It’s fundamental to who they are. It’s why they exist.”

Students in California on a shoestring budget are competing in a housing market where the median monthly rent of about $3,000 is 42% higher than the national level. The state is grappling with a roughly 1 million-unit housing shortfall, in part fueled by years of population growth and zoning restrictions that have choked off new construction projects.

Odin Spalinger, who lives in a van near UC Santa Cruz, is just one telling example. The third-year history major does schoolwork on his phone, drives 40-minutes to his mom’s house for showers, and occasionally has to use portable roadside toilets.

“I feel ashamed of myself,” Spalinger said in an interview. “It’s just really disappointing to see that it’s become so unsustainable to live here.”

Across the country, college enrollment has fallen for three straight years since the pandemic, though the pace of those declines has been slowing. California saw a 1.1% drop in undergraduate enrollment in the fall of 2022, slowing from a 5.9% decline the year earlier, according to preliminary data from the National Student Clearinghouse Research Center. The UC system enrolled 230,529 undergraduate students in the fall of 2021, marginally above its fall 2020 count of 226,449.

California’s higher-education schools consistently identify housing capacity as a constraint to growth. Scott Hernandez-Jason, assistant vice chancellor for UC Santa Cruz, said about 800 fewer students were accepted this year because of the lack of beds. Other schools are looking at ways to adapt: Long Beach City College started a pilot program last year to provide overnight parking for students who sleep in their cars.

The need for student housing is attracting the attention of investors. In August, Blackstone Inc. acquired American Campus Communities Inc., one of the country’s top developers and mangers of student housing, whose portfolio of properties in California include dorms at UC Berkeley, UC Irvine, San Diego State University and San Francisco State University. In a statement announcing the $13 billion deal, Blackstone said its “perpetual capital will enable ACC to invest in its existing assets and create much-needed new housing in university markets.”

Several of California’s campuses are likely to see double-digit rent growth through 2025, exacerbating the affordability crisis while creating “out-sized revenue growth opportunities” for investors, according to Jeff Adler, vice president of Yardi Matrix, a software service that provides commercial real estate data. While public-private partnerships help serve the needs of schools, CSU officials say, they often come with a higher development price tag, which can trickle down to students through higher dorm rents.

Some relief may be coming. Housing capacity across the state is set to grow by about 7,300 beds thanks to $1.4 billion in state grants to support housing construction at five UC, nine CSU and 12 community college campuses. And over the next two years the state plans to issue $1.8 billion in interest-free loans to campuses for affordable student and faculty housing.

The state also passed a measure exempting new student and faculty housing projects from an environmental review process that has been used to stop affordable housing construction in the past. The issue drew national attention earlier this year when Save Berkeley’s Neighborhoods won a suit to trim UC Berkeley’s 2022-23 enrollment by as many as 3,000 students, arguing that the student population was putting too much pressure on the local housing market. Those students’ acceptance letters were slated to be rescinded until Governor Gavin Newsom signed emergency legislation reversing a court-ordered enrollment cap.

And because students participate in the broader housing market, they also stand to benefit from new landmark laws that will incentivize residential development in some commercial corridors -- a move that could see vacant commercial spaces like strip malls turned into housing -- and eliminate parking mandates, making it easier to building multi-family homes.

“This is a huge step for California,” said Muhammad T. Alameldin, a policy associate at UC Berkeley’s Terner Center for Housing Innovation, who experienced homelessness while a student there in 2017. The latest measures aren’t a silver bullet but they open up “this option for more students that want to enter the school system by living in more affordable housing.”