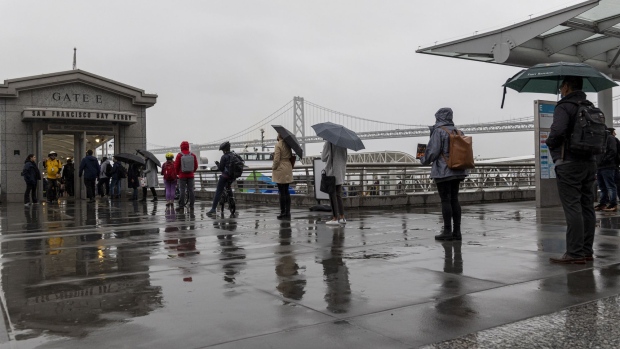 Commuters wait to board a ferry during a rain storm in San Francisco, on Oct. 20. Photographer: David Paul Morris/Bloomberg , Bloomberg

(Bloomberg) -- Record-breaking storms that dropped snow by the foot in the Sierra Nevada this month helped rid California of wildfires but it will take more than that for the state to recover from a protracted drought. “Recent storms improved drought conditions but did not come close to ending the drought for the region,” the National Integrated Drought Information System said in a statement. “The current drought developed over many months to year, leaving soils parched.”

The storms were brought by atmospheric rivers, long plumes of moisture that can unleash about the same amount of water that flows out of the mouth of the Mississippi River.

A series of soakers, such as the one that swept through earlier this week, will be required to break the massive drought that covers more than 92% of 11 western states. Unfortunately, fall storms also aren’t great predictors to how much rain and snow winter will bring.