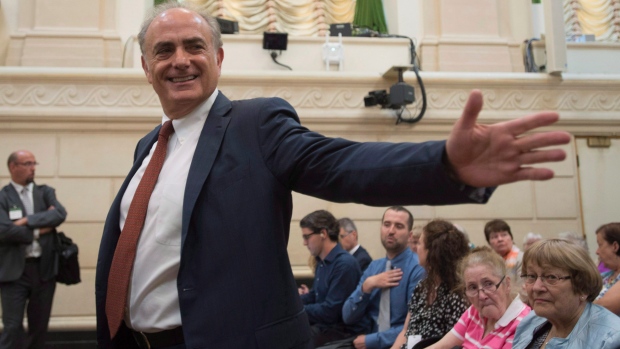 Air Canada CEO Calin Rovinescu gestures to a colleague as he waits to appear before the Commons official languages committee on Parliament Hill , The Canadian Press

After shepherding the carrier out of bankruptcy in 2003 as its chief restructuring officer and then steering it through the 2009 financial crisis as CEO, he helped transform the company and made Air Canada one of the TSX’s top-performing stocks since 2013.

BNN sat down with Rovinescu to get his thoughts on the state of the Canadian airline business, how he’s bracing for global protectionism, competition and more.

ROVINESCU ON DOMESTIC VS. INTERNATIONAL EXPANSION:

“We made the decision several years ago that our main focus of growth would be international … 90 per cent of our growth the last couple of years has been international.

That doesn’t mean that the domestic routes aren’t important for us. They are. And, certainly some of the key strategic routes are going to continue growing as we grow the international footprint. We’ll bring more connections over Toronto, Vancouver and Montreal, primarily – secondarily the other hubs – and this is a key driver of our growth and will continue to be a key driver of our growth.”

ON RE-BUILDING THE BRAND

“Air Canada, because of the financial challenges that we had post-9/11, post-SARS, post-restructuring, it was almost a decade, I’d say, of lost growth. It did not grow as much internationally as much as it could have or should have. It was not competitive enough to be able to do that. So, there’s a little bit of a catch-up factor at play. There’s no question that we have been an outlier but obviously based on last year’s results, we’ve been able to expand in a successful fashion.”

“Canada as a country is, generally-speaking, quite welcoming to immigrants and a popular tourist destination. So, neither of those things are changing. Our aspirations are well beyond Canada and we’re taking traffic from the United States, connecting over Canada to our global network, taking traffic from third countries, connecting over our Canadian hubs onto other countries. This is a strategy that will continue to apply. We don’t see anything that’s going on in the States diminishing that. Whether or not it will increase it remains to be seen, but right now, from the perspective of what has gone on in the United States, [it] has not really been a factor for us.”

ON THE COST OF DOING BUSINESS IN CANADA

“We’ve made no secret of the fact that it’s not just landing fees, it’s the entire aviation infrastructure in Canada is too [costly]. Airports in the United States tend to be subsidized to be able to encourage carriers to invest in these routes. In Canada, not only is it not subsidized, but there is a ground rent that’s paid by airports to the Government of Canada as part of the consolidated revenue fund. These kinds of charges, whether it’s security surcharges, the air navigation fees, landing fees, ground rent, fuel excise taxes, all these things tend to be a restraint on how much you can grow in some of these markets. We’ve had a lot of traffic that would otherwise have flown over Canada going to the border airports.

Approximately 40-to-43 per cent of our ticket price is in rates and charges and taxes. This is something that as we want to continue to have global aspirations we need to have a level playing field competitively.”

“We’ve talked for many years about having a reciprocal environment with the United States and with Europe, so that if a foreign carrier could own 49 per cent here, that we should have the same ability to do that there. Despite those rules not having changed, the Canadian Government has announced that it will look to increase the Canadian ownership rules and provided it’s done in a fair way and not in a reactionary [way] – there’s been a lot of noise about the so-called low-cost carriers coming into the market – we have no problem with any of that, provided the rules are clear for everyone concerned.”

ON AIR CANADA’S PLACE IN THE WORLD

“We have what it takes to be a global champion, in all respects. To be able to build, from Canada, a global business in aviation and that means taking on the best in the world. For sure we need the cooperation and the regulatory environment to encourage that, taxation systems, and to be able to retain talent, and so forth, but that is our next objective: To become one of the top carriers in the world.

“In 2009, when I came in there was no access to liquidity, to credit. Banks were not lending. You had a recession, people were not travelling as much. The pension deficit was at an all-time high… That type of burning platform is the best backdrop to effect change.

We’ve seen a lot of change in this organization from the culture, the labour environment, the pension plans, the network, the international growth, our operational efficiency, etcetera.”

ON HIS MANAGEMENT STYLE

“I do believe a lot in giving people enough rope to be able to go out and do what they need to do. We have a common vision, but go and run your business. This has been one of the things we’ve tried to do: delegate, run your business, take responsibility, behave like an owner.

Figure out that if this is the best way of implementing something, you don’t need to wait for an analysis through five levels of committees. Just do it. We’ve had a lot of transformational success in the organization through that.”

“For sure we like to win, but for us winning was never a destination, per se … It gives you the opportunity to say, ‘We may have had a great year but we’re not really spiking the ball in the end zone just yet.’ We’re going to go a little further and continue to see what the next challenge is. We like to win, but we’re certainly not satisfied with where we are at this stage.”