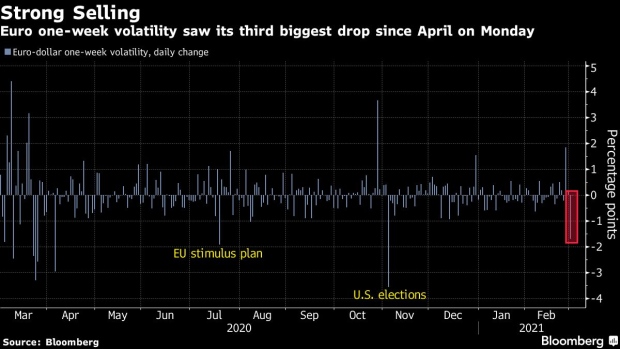 Daily exchange rates of Turkish lira, U.S. dollar and euros on an electronic board at a currency exchange in Istanbul. , Bloomberg

(Bloomberg) -- Global currencies are displaying a defiant calm in the face of bond-market turbulence -- and that’s flashing opportunity for some analysts.

A gauge of expected swings in Treasuries hovers near its April highs after the reflation trade spurred the biggest monthly surge since the 2013 Taper Tantrum. Yet, a similar index in foreign exchange is resuming this year’s decline, resting in a historically stable trading range that kicked off mid-2017.

This divergence between the two asset classes has strategists warning something may have to give. Ever so tentatively, they’re looking out for an increase in currency volatility, especially with upcoming policy announcements from the European Central Bank and Federal Reserve as well as key data on U.S. jobs.

“There is scope for increasing volatility,” said Jeremy Stretch, the head of Group-of-10 currency research at Canadian Imperial Bank of Commerce in London. “If I was in the office I would stroll over to my options trader one day soon.” He predicts an increase in one-week volatility in the euro-dollar pair, along with wider fluctuations in the dollar-yen cross.

For now, storm clouds on the horizon for currencies remain few and far between. Hedge funds sold off volatility in the euro-dollar pair this week, according to two traders in Europe who asked not to be identified because they aren’t authorized to speak publicly.

When currency volatility does increase, higher-yielding exchange rates may be more susceptible, she said. There’s also scope for greater swings between the dollar and other havens such as the Swiss franc and Japanese yen.

“Certainly these two could lose more ground to the dollar on an uptick in U.S. yields.”

Broader financial conditions and seasonal patterns also suggest a pick-up in drama. Spot liquidity for the euro has seen notable deterioration in recent months, while options liquidity is worsening for the New Zealand dollar, Swedish krona and Norwegian krone, according to a report by Bank of America Corp. strategists including Michalis Rousakis.

The JPMorgan Global Currency Volatility Index has seen an average increase of 0.3% in March over the past 10 years. That’s greater than any month except August. Deutsche Bank’s own currency volatility index shows a similar trend.

“Investors are worrying about rising inflation and higher interest rates but the central banks are generally trying to push back on these fears,” Foley said. “There is a lot to resolve and this means the potential for choppy trading conditions.”