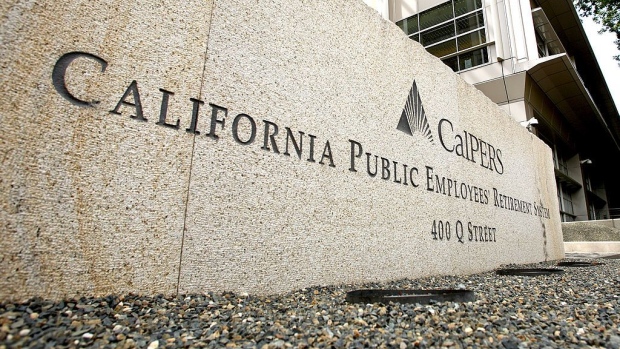 (Bloomberg) -- A debate is raging inside the California Public Employees’ Retirement System over whether it should quickly exit its Russia investments -- at a hefty cost.

In the past week, staffers at the largest U.S. public pension discussed the possibility of dumping the holdings, a decision that would ultimately require the board’s approval. That followed California Governor Gavin Newsom’s call for state pensions to cut off money to Russia following its invasion of Ukraine -- and to send a message to the world that the country is uninvestable.

Then came the price tag: Calpers would have to mark down its entire portfolio of publicly traded Russian investments -- recently valued at roughly $300 million -- to zero. Some senior managers reckoned the investments would be worthless if they tagged them for hasty disposal amid stiff sanctions and swooning prices for Russian assets, according to a person familiar with the matter.

The conversations inside the $500 billion fund underscore the challenges faced by pension plans, endowments and corporate leaders across the U.S. as they grapple with how to respond to the growing humanitarian crisis. The Pennsylvania Public School Employees’ Retirement System plans to sell holdings in Russia and Belarus, and New York City’s comptroller has called on the city’s five pension funds to divest from Russia.

One big question at Calpers: If the pension fund unloads the stocks, should it do that in days, weeks or months? The answer would affect the size of the markdown, as well as the prices such assets ultimately fetch.

By Tuesday, the debate had intensified. In hallways and emails, some employees questioned the cost of a potential quick exit, the person said. The markdown would shave mere basis points off of Calpers’s reported returns. But if pensions can’t meet their promises to workers, firefighters and police officers, taxpayers make up the shortfall.

The fallout from Russia’s Feb. 24 invasion is reverberating throughout global markets, including index-linked investments, as firms work to distance themselves from the country. MSCI Inc. and FTSE Russell both cut Russian equities from their indexes, further isolating the nation.

Calpers is now reassessing whether and how quickly to dispose of its publicly traded Russia holdings. Spokesman Joe DeAnda said the pension fund’s staff don’t have the final say on the matter.

“Only the Calpers board can authorize divestment activities,” he said.

The deadline for Calpers staff to resolve its debate is Monday, when they’re expected to deliver a plan to its investment committee.

In the past week, the market for Russian sovereign debt has frozen, with some banks pulling back from connecting sellers with buyers, people familiar with the matter have said. The ruble has plunged since the invasion began and the nation’s stock market remains closed, compounding the difficulty for foreign investors to value their equity holdings. Several Russian banks were cut off from the SWIFT financial messaging system.

Pensions also face a particularly tricky challenge determining how much their Russian private equity investments are worth.

Calpers staffers, for example, are evaluating the best way to value a Moscow shopping mall held through a partnership with Hines, a Houston-based commercial real estate developer. Some inside Calpers have questioned whether the roughly $200 million property needs to be marked down to zero, one person said. Others expect the hit to be substantial but potentially softened by the prospect that consumer spending will pick up as the pandemic recedes, another person said.

How pensions and other institutions set valuations for their most illiquid holdings at the end of the first quarter will be critical to whether many of them achieve expected returns. Because the reporting of private equity returns lag behind those of public securities by three months, investors don’t have another quarter to try to make up for gains by June 30, the end of the fiscal year for many organizations.

Investors that specialize in acquiring second-hand fund assets from pensions and other institutions haven’t seen them trying to unload their Russian holdings in the past month, people familiar with the matter said.

Few investors would want to be viewed as forced sellers. This means that even as pensions and endowments seek to distance themselves from Russia, their cash in private equity funds may be locked up for the long haul.