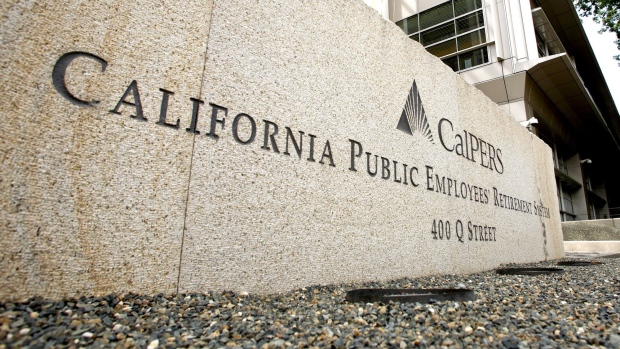 (Bloomberg) -- The California Public Employees’ Retirement System sold about $6 billion of its stakes in private equity funds to second-hand buyers, severing ties with a slew of past managers and freeing up cash for new wagers.

The $440 billion public pension fund, the largest in the US, has cycled through four investment chiefs since 2009 and has long wrestled with the complexity of its $50 billion in private equity holdings. Calpers hired Jefferies Financial Group Inc. to explore ways to clean up its portfolio and shop a swath of assets, according to people familiar with the matter.

Lexington Partners, an investment business of Franklin Resources Inc., and CVC Capital Partners’ Glendower Capital snapped up pieces in separate sales that wrapped up over the past two weeks, said the people, who asked not to be identified discussing private transactions. The deal is not only the largest of its kind by Calpers, but private equity executives said it’s probably the biggest-ever involving second-hand fund stakes changing hands.

Trading in such size came at a price: Calpers sold its holdings at a roughly 10% discount to their value in September 2021, some of the people said. The fund softened the blow thanks in part to how it structured the deal, they said.

The blockbuster transaction generates money for investment chief Nicole Musicco, who took over earlier this year, to make new wagers as markets remain volatile. She has told Calpers directors that she wants to build a team that would buy stakes in private companies. That would let Calpers gain more control and bypass private equity firms like Blackstone Inc. or Carlyle Group Inc.

“The sale positions us to act on our new asset allocation and allows us to capitalize on market opportunities,” Musicco said in a statement to Bloomberg. Calpers drew up plans last year to increase private equity and grow private debt.

Representatives for Lexington, Glendower and Jefferies declined to comment.

Pensions and endowments are among large institutions taking advantage of the rise of so-called secondary buyers -- other deep-pocketed investors willing to take on older, unwanted private equity stakes that are typically hard to sell and value. These kinds of trades totaled $63 billion in 2021, a record high, according to Campbell Lutyens & Co.

Wall Street is bracing for a slowdown in trading private equity stakes. With markets in flux, some sellers are hesitant about striking deals at steep discounts.

The haircuts for various assets sold by Calpers range from high single-digit percentages to about 20%, some of the people said.

In a move to make any discount less punitive, Calpers opted to defer some payments beyond June 30, the last day of its fiscal year, people said. That allows Calpers to continue collecting some of the cash generated by the investments. And by not taking all of the sale proceeds upfront, Calpers can avoid a large balance of undeployed cash, which would drag down performance for the latest fiscal year.

Calpers, like many public pensions, doesn’t have all the assets needed to meet future promises to retired police, firefighters and other state workers. If the funds can’t meet their return benchmarks, it puts the onus on taxpayers to help fill the shortfall.

Lexington and Glendower took over a mixed bag of older funds that include buyout and growth strategies. The deal helps Calpers break ties with some managers it invested with previously.

Calpers, one of the earliest public pension funds to get into private equity, has seen its returns in the asset class trail peers over time as rivals crowded into buyout funds in search of higher returns.

Various Calpers leaders have tried to remake the pension’s sprawling private equity portfolio, but some ran out of time or faced challenges getting support from others at the fund.

Ted Eliopoulos tried to slash the number of managers during his tenure as CIO from 2014 to 2018. Under Musicco’s predecessor, Ben Meng, Calpers expanded coinvestments, which are typically deals done alongside funds to help curb fees.

The pension fund has continued to ramp up coinvesting, one of the people said.