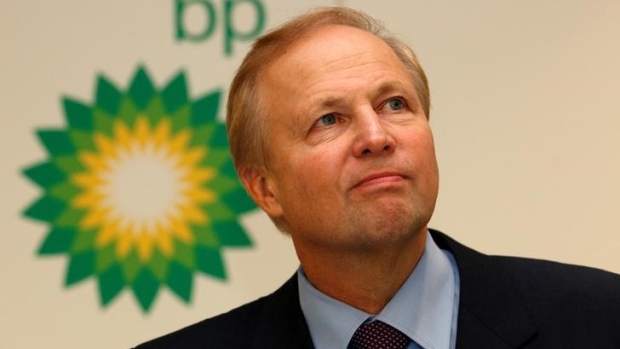 BP's Chief Executive Bob Dudley speaks to the media after year-end results were announced at the energy company's headquarters in London in 2011 , Reuters

BP Chief Executive Bob Dudley on Tuesday urged Cambridge University not to yield to pressure from hundreds of students and academics to cut its investments in fossil fuels and pointed to BP's donations to the university.

"We donate and do a lot of research at Cambridge so I hope they come to their senses," Dudley told the AIPN International Petroleum Summit.

BP did not immediately disclose how much it has been donating to the university.

In 2015/16 it gave grants worth around 1.4 million pounds, according to Cambridge, and in 2000 a 22 million pound donation from BP helped to create the BP Institute for Multiphase Flow, which focuses on research in surfaces and particles and fluid dynamics.

Cambridge said the University Council will publish its decision on whether it will change its investments after years of campaigning by students and academics after a meeting next month.

A spokesman for BP said after Dudley's comments that he does not expect the group's relationship with Cambridge to change.

"One should not infer from Bob's comments that he was in any way linking our support of Cambridge with the University's decision on whether or not to divest from the oil and gas industry."

Last week, about 350 Cambridge academics signed a letter to the university and its colleges, which enjoy a certain degree of independence from the university's central administration, to excise fossil fuel investments from the roughly 6.3 billion pounds (US$8.81 billion) at their disposal.

"We ... call on the university's investment office to immediately freeze any new investments in fossil fuel companies, and to divest from direct ownership and any commingled funds that include fossil fuel public equities and corporate bonds within five years," an open letter said.

Signatories include chemist David King, who was Britain's Special Representative for Climate Change until last year following his seven-year stint as the government's Chief Scientific Advisor.

Activists in the Cambridge Zero Carbon Society said they received a letter on Monday from vice-Chancellor Stephen Toope which stated the university had a leadership role in understanding and tackling climate change.

"The objective ... is to promote and execute urgent and tangible action to deliver a carbon neutral future. The University is already taking steps that must be further expanded in the areas of its investments, research, education, estate and policy decisions," Toope's letter said.

This mirrored Cambridge's response when asked about Dudley's comments.

A spokesman for the activist group said in response to Dudley, "if the University is unable to divest its endowment in line with the democratic wishes of students and staff due to these threats, then there is no longer academic independence at Cambridge."

The world's top oil and gas companies are facing rising pressure from investors to shift to cleaner energy and renewables in order to meet international targets to sharply reduce carbon emissions by the end of the century.

Dudley said that BP was going to invest aroundUS $500 million per year in renewables in the coming years, but that the world will need oil and gas "for many years to come."