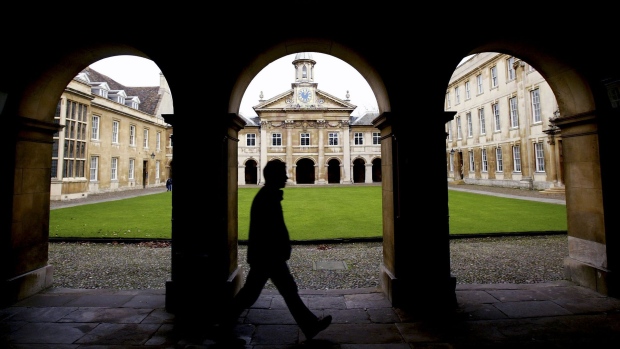 CAMBRIDGE, ENGLAND - JANUARY 13: University students return for the spring term at Cambridge University on January 13, 2004 in Cambridge, England. The students return as a heated debate is under way in parliament over the funding of higher education, in which the government is facing strong opposition for its plans for top-up fees. (Photo by Graeme Robertson/Getty Images) , Photographer: Graeme Robertson/Getty Images Europe

(Bloomberg) -- Cambridge University benefited directly from enslavement and the slave trade, a three-year enquiry has found.

While Cambridge has often celebrated its well-known abolitionists, like Thomas Clarkson and William Wilberforce, a new report shows that the institution benefitted substantially from the slave trade over many years, with a significant part of the university’s funding derived from the exploitation of enslaved people.

The research was conducted by two Cambridge post-doctoral researchers appointed by the Advisory Group on the Legacies of Enslavement, a group of senior academics, student and alumni representatives chaired by Professor Martin Millet, the Laurence Professor of Classical Archaeology. The group also established a panel of historians from outside the university to provide advice on the research.

The enquiry, which was launched in 2019 and published as a digest on Friday, aimed to shed a light on the ways in which the university was involved in the slave trade, as well as how its scholarship shaped public and political opinion, reinforcing racist ideas between the 18th and early 20th centuries.

While several Cambridge alumni were enslavers and plantation owners, the university’s most direct involvement in the slave trade came through its investments in the South Sea Company, which traded slaves between Africa, South America and the Caribbean from 1713 to 1740. Cambridge colleges including Corpus Christi, Gonville & Caius, Jesus, King’s and Pembroke were large investors in those companies and made “significant financial benefits” through their investment, the research found. Many Colleges continued to receive dividends on their bonds until their redemption in 1854.

The report notes that the Gibbs Building in King’s College was largely built with income from the slave trade, while  The Fitzwilliam Museum was partly funded with donations that derived from the profits of the slave trade. Several colleges also invested in the East India Company, and later, at the end of the 19th and early 20th centuries, held investments in other colonial enterprises in Australia and Africa. Some colleges also received donations directly from colonial companies.

Researchers also found that academics at Cambridge consistently developed and disseminated racist ideas that justified enslavement and colonization. Cambridge was a stronghold of pro-Confederate thought during and after the American Civil War.

Cambridge said a full version of the research would be published in 2023.

In response to the findings, the report calls for the creation of a Cambridge Legacies of Enslavement Research Centre to continue the work by the enquiry. Cambridge said it will pay £1.5 million ($1.7 million) of seed funding to develop proposals for the center, as well as other activities.

Cambridge will also commission and install plaques that identify and contextualize statues of individuals around the university, according to the report.