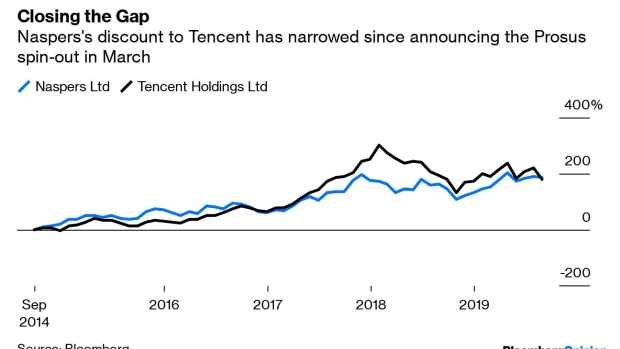 (Bloomberg Opinion) -- Europe is getting its own version of Softbank Group Corp. with the Amsterdam listing of tech investment firm Prosus NV. The move will likely help it avoid the fate of Yahoo Inc., the erstwhile Silicon Valley titan which has since fizzled away as a holding company.

South African media firm Naspers Ltd. has spun most of its technology investment out into Prosus. That new company, like its parent (which retains a stake of more than 73%), derives almost all of its 121 billion-euro ($133 billion) market capitalization from a 31% stake in Tencent Holdings Ltd., the Chinese internet behemoth behind WeChat. That’s much like Softbank, which trades at a discount to its investment in China’s Alibaba Group Holding Ltd.

Bob van Dijk, the chief executive of both Prosus and Naspers, intended the Amsterdam listing to reduce the discount to the $131 billion value of the Tencent investment.

Naspers came to constitute about 20% of the Johannesburg stock exchange; that means index funds had to sell shares in order to meet limitations about concentrating too much ownership in one stock. The stock started to underperform Tencent shares the moment it exceeded a 10% weighting, as Bloomberg Intelligence analyst John Davies has pointed out.

On that basis, the listing has so far been a success. When Naspers announced the spin-off in March, it was trading at a near 30% discount to its Tencent stake, taking into account its net cash position. Now Prosus is trading at a discount of just 3% to its Tencent shares, net of cash but not including other investments.

Prosus is home to more than just the Tencent stake. It houses most of technology investments made by Naspers, including stakes in Delivery Hero AG, Mail.Ru Group Ltd. and PayU. The value of the publicly-traded entities alone is 4.1 billion euros. Including these, Prosus still has a discount of perhaps 20% to its sum-of-the-parts valuation.

The question for van Dijk and his team remains to what extent they can break the stock’s lockstep with the Tencent share price. If they can’t, then Prosus risks becoming little more than a proxy investment, and follow the fate of Yahoo.

That American firm, after selling its eponymous internet assets to Verizon Communications Inc. in 2017, rebranded as Altaba Inc., and became a holding company for investments in Alibaba Group Holding Ltd. and Yahoo Japan Corp. The combined value of those holdings persistently exceeded Altaba’s valuation by some 25%. It is now dissolving those holdings and shutting up shop.

Some sort of mark down is always likely to be the case, partially because Prosus shareholders, like those of Altaba, have no real say in the running of the firm’s biggest investment. Tencent management is after all not directly accountable to Prosus investors. And there continue to be overhanging concerns about governance, as I have written before.

Given all that, the relatively slim Prosus discount – compared to Altaba, at least – suggests investors are in fact affording some value to its portfolio of investments besides Tencent. Does that mean they would rather van Dijk reduce the Tencent stake (he says he has no plans to do so) and reinvest the proceeds elsewhere? Probably not.

There are reasons why Prosus might continue to close the valuation gap. Inclusion on Amsterdam’s Euronext indices over the next few months ought to attract index funds, for instance. And some more lucrative exits such as the the 1.6-billion-euro profit Naspers made on India’s Flipkart would reassure shareholders that van Dijk is making the right investment calls.

Van Dijk has taken a healthy step to bring the company more in line with the value of its holdings. But now he can’t as readily point towards technicalities as a reason for the discount, he needs to prove his ability to deliver the investment returns that justify spending shareholders’ money.

To contact the author of this story: Alex Webb at awebb25@bloomberg.net