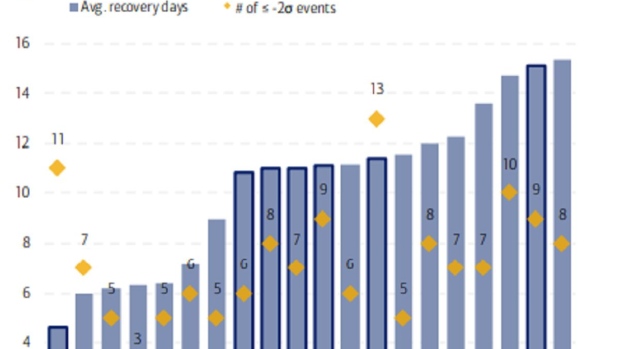 (Bloomberg) -- The S&P 500 Index has managed to stay above its recent bottom amid a renewed selloff, but Bank of America Corp. is urging investors to keep their guard up.

The plunge in the benchmark on Sept. 20 and the subsequent swift rebound at the end of last week reinforced the idea that 2021 is a perfect year to buy the dip. On average, the S&P has taken 4.6 days to fully recover from a significant drawdown, which BofA defines as a two-sigma event. That’s the fastest since the firm’s data began in 1928.

A sign of market resilience? Maybe. But to BofA strategists including Gonzalo Asis and Benjamin Bowler, it’s really evidence of market fragility. The dip-buying mentality prevailing among investors sets the stage for bigger trouble, they warn, especially with the Federal Reserve planning to cut monetary support and Covid variants continuing to spread.

“Moral hazard and a ‘can’t-lose’ attitude from investors only raise the risk of a larger fragility shock before year end,” the strategists wrote in a client note Tuesday. “Adding further uncertainty to the outlook is the looming Fed taper and general hawkish turn away from the measures prompted by the Covid shock.”

The strategists joined their counterparts at Morgan Stanley in urging investors to remain vigilant after last week, when the S&P 500 reversed losses to snap two weeks of declines.

Stocks are down for a second day Tuesday, with tech shares leading the decline amid a spike in Treasury yields. The S&P 500 has lost 3.7% in September, putting it on course for its worst month in exactly a year.