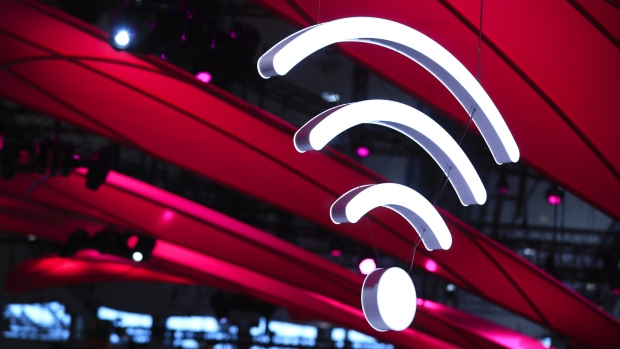 An anti-Brexit demonstrator waves a combined British Union flag, also known as a Union Jack, and European Union (EU) flag outside the Houses of Parliament in London, U.K., on Tuesday, Jan. 29, 2019. , Photographer: Bloomberg/Bloomberg

(Bloomberg) -- From her home office close to the Irish border, Catriona Curran can spend up to eight hours struggling to e-mail documents to the U.S. She has a hard time believing technology technology could unlock the answer to the trickiest part of Brexit.

“My colleagues are often left in disbelief when I tell them that I will leave my laptop running overnight to be able to send them files that would take them a matter of minutes,” Curran, 26, who works in marketing, said.

Curran lives in the rural village of Donagh in Fermanagh, the frontline of Brexit. Right now, the prospects of a smooth exit by the U.K. from the European Union hinges on keeping the border between the south and north of Ireland invisible.

The EU maintains the so-called backstop, a guarantee in the Brexit deal which binds Northern Ireland closely to the bloc, is needed. By contrast, Brexiteers counter that as yet undiscovered technology can solve the riddle. Curran is skeptical.

“Do I believe we have the infrastructure or technology to cope with checks and other border measures post Brexit?” Curran said. “Well, I am one person, sitting angry and frustrated, at the slow, arduous process created by outdated and unsophisticated technology.”

“Now multiply that by 30,000, for the amount of people crossing the border everyday for work. After that, the answer is pretty clear,” she said.

Conservative lawmakers want Theresa May to find “alternative arrangements” to replace the backstop. These could include cameras, number-plate recognition and maybe even drones, according to Brexit advocates, including the European Research Group.

The EU has consistently said it has yet to see any convincing evidence that technology alone can keep the border invisible, though it’s willing to consider the possibility if the U.K. produces proposals.

When Catherine Carey, who lives close to Curran, wants to talk to her teenage daughters on her mobile phone, she has to leave her house to in search of a signal.

“The phone will not work in the house at all and only occasionally outside,” the 54-year old teacher said. “When I go down the road a few miles, I have no coverage.”

“No one on the mainland has any concept of how difficult this is going to be for us and, frankly my dear, they don’t give a damn,” she said.

It’s a recurring refrain along the 310-mile (500-kilometer) border running from near Derry in the north to Dundalk in the south, which will form the EU’s land frontier with Britain after Brexit.

In Pettigo, which straddles the border with the south, Tracey Sleator’s internet connection is “almost non existent.” When her daughter studied in Belfast, 90 minutes away, she didn’t come home at weekends because she needed to work online.

“Only one person at a time can be on the internet and it seems slower in the evening time. It’s a nightmare trying to use Netflix,” said Sleator. “I have complained to my provider for five years, but the situation is now beyond a joke and no-one is willing to help us.”

Teacher Tayna Johnston lives outside Enniskillen, a more populated area, but still has to drive to a nearby mountain to make a phone call.

“Our mobile reception is zero from all providers inside the house, with next to nothing outside the house,” says Johnson. “We often have to bring the phone out for a drive along Topped Mountain to get a signal.”

To contact the reporter on this story: Rodney Edwards in London at redwards102@bloomberg.net

To contact the editors responsible for this story: Vidya Root at vroot@bloomberg.net, Dara Doyle, Emma Ross-Thomas