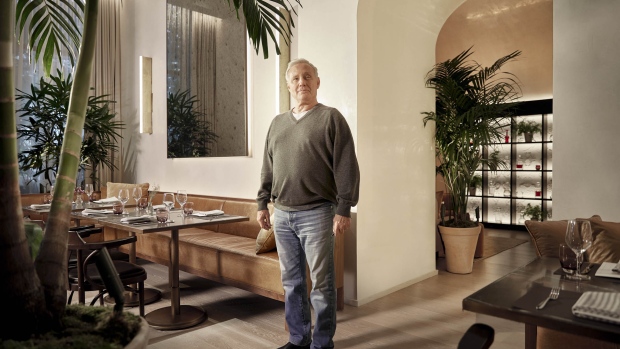 (Bloomberg) -- Just a few months ago, Vice News published a story with a provocative headline: The Coolest Place to Get a Drink in Midtown Manhattan Is the New Taco Bell.

The title was tongue-in-cheek, but it speaks to a broader truth: Midtown Manhattan has never been a bustling epicenter of places you’d want to be. Enter Ian Schrager, the visionary behind the original midtown hotspot, Studio 54. Tomorrow, his latest collaboration with Marriott International Inc., Times Square Edition, opens with 452 rooms, two restaurants by Dovetail and Narcissa’s John Fraser, and yes, a boundary-pushing nightclub—all in a 42-story tower that hovers high above the area’s supersized billboards.

The hotel is the ninth for Edition, a brand whose minimalist-chic aesthetic has always served as a monochromatic backdrop for beautiful, tan, and well-dressed guests. It’s also the latest project to bear Schrager’s signature—the septuagenarian is credited with inventing the boutique hotel in the 1980s with Morgans Hotel Group, and his most influential properties have included Miami’s Delano Hotel, the Mondrian in West Hollywood, and the democratic, yet design-forward Public in New York’s Lower East Side.

But even for someone of Schrager’s magnitude, making Times Square cool—and luring Manhattanites to the neighborhood they most love to hate—is a tall order.

“I’ve always met the same skepticism,” Schrager tells Bloomberg on a recent first-look tour of the hotel, ahead of its official opening. “This time they’re skeptical that we would be able to attract in-the-know New Yorkers to Times Square. But I’ve done that so many times,” he adds, referring not just to Studio 54 but to the Royalton Hotel on 44th Street and the Hotel Paramount on 46th, with its famed Whiskey bar. “Times Square is absolutely not an issue,” he says defiantly. “For New Yorkers, as long as there’s a good product, they will go anywhere.”

Based on looks alone, Times Square Edition will have no trouble establishing itself as a mature oasis from one of the world’s most frenetic crossroads. Its all-white entrance—a narrow corridor decorated with just one piece of art, a glowing metallic green orb—offers a kind of sensory deprivation that offsets the noise just outside. (The hotel’s neighbor is, glamorously, a Hershey’s store.)

At reception, on the tenth floor, ebonized black floors give way to a monolithic black desk backed by a green wall and flanked by gauzy white curtains. (It’s a look that will feel familiar to anyone who’s visited previous Editions.) To one side, an illuminated, onyx-colored staircase leads to Fraser’s Michelin-aspiring restaurant, 701West; to the other, a series of sitting rooms progresses from all-black to all-white. It all culminates in what Schrager calls the “Bladerunner” terraces: They’re strategically planted with boxwoods and evergreens to shield the view of office buildings and focus attention on the hive of Times Square below, so that you feel at once separated from and part of the bustle.

“When you walk through this floor, you couldn’t be further away from Times Square,” says Schrager. “Then you come outside, and you’ve got a bird’s eye view of all the reverie; you can appreciate the brilliance and luminosity of the whole area. It’s magical.”

For overnight guests, rooms on lower floors capture that magic better than rooms on the upper floors; their views are eye-level with massive billboards, offering an impressive sense of scale that’s lost farther up. But all rooms and suites—including the 1,880-square-foot penthouse—are smartly designed in a soothing ivory-and-blond wood color palette that either calms you from the chaos outdoors when the drapes are closed, or pulls your attention to it when they’re open. Even the smallest rooms feel airy, thanks to such inventive touches as recessed panels for the televisions and an open-flow layout between bedroom and bathroom.

“The room design is the most difficult aspect of any hotel,” says Schrager. “I wanted these to feel like a cabin on a yacht: very calming and luxurious.”

“Build It and They Will Come”

The Times Square Edition’s experiment comes at an opportune time. Tech companies are reinvesting in the area’s expansive office spaces, with local tenants including Microsoft, Adobe, and Snapchat. Soon, Amazon.com will have a $55 million space in Hudson Yards, the super-mall and skyscraper complex a half-mile west and a half-mile south of the 42nd street subways.

It’s a pattern that has played out in Manhattan before, says Nancy Novogrod, the longtime editor-in-chief of Travel and Leisure magazine who now runs Culturati Travel Design, an arts and culture-focused branch of the powerhouse travel agency Valerie Wilson Travel Inc. “We saw this happen around Columbus Circle with the Mandarin Oriental, along 57th Street with the Park Hyatt, and around the High Line with the Standard.” In other words, hotels can often signal a changing tide in blighted or underappreciated parts of the city.

In many ways, building a luxury-branded hotel in Times Square feels like grabbing low-hanging fruit. “The area is full of mediocre places,” says Jack Ezon, founder and managing partner of New York-based travel agency Embark. “The W tried to change that 15 years ago, but they went in a somewhat grungy direction, and other places like the Knickerbocker have come in with nice rooftops but little else. There’s a real opportunity there.” (The Times Square Edition doesn’t have a true rooftop bar, but between its expansive patios and the stunning indoor-outdoor garden on the ninth-floor, it will have plenty of Instagrammable places to gather.)

These days, a mark of success for any hotel is whether locals hang out there—and getting locals to hang out in Times Square will largely become the challenge facing chef John Fraser, who’s tasked with running the ambitious fine-dining 701West and the all-day Terrace restaurant. “The real question is, ‘How do you train a New Yorker to stop being prejudiced about this area?’” observes Fraser. “They’ve come around to Bushwick, the Financial District, even the Upper West Side—but Times Square is the last place to be accepted.”

Perhaps the best answer is the Paradise Club, on the hotel’s seventh floor. While it seems like this theater-turned-disco—with its Bosch-meets-Dali murals, checkerboard floors, and enormous projection screen—should bear all 10 fingerprints of Studio 54’s mastermind, it’s the one space Schrager fully outsourced. House of Yes, a Bushwick, Brooklyn, N.Y.-based outfit known for its zany breed of “performance-fueled nightlife,” is in charge of the nightly four-act show, which will include a rotating mix of dance, aerials, opera, contortion, and magic segments—all projected (at least occasionally) in real-time on a 17,000-square-foot Jumbotron on the building’s façade.

“We had no parameters; it just had to be awesome,” says Anya Sapozhnikova, founder of House of Yes, whose collaborators include Patrick Woodroffe, longtime lighting designer for the Rolling Stones.

Before the show, Fraser will serve a pre-theater menu, including oysters and wagyu beef seared on a hot stone. And afterward? “All of the sudden, with the flip of a switch, the show ends and it turns into a nightclub, with the show coming out and becoming part of the audience and a DJ booth coming onto the stage,” Schrager says. He expects the party to cap out at 400 people and stretch until 4 a.m.. “Believe me, if we didn’t have to close at 4, we would never close,” he adds.

All this might give New Yorkers reason to shed their preconceptions about Times Square—at least long enough to see what the fuss is about. “People won’t stay away from something new that Ian does,” opines Novogrod.

“He'll get people in for the opening,” Novogrod adds, “and then Marriott can take over with its marketing and its powerful loyalty program.” The combination, she says, is strong. It’s also risky: If the crowd makes the hotel, relying on loyalists rather than tastemakers to fill the rooms can dilute its social cachet.

For his part, Schrager is confident that his project will inspire local developers to reach for a higher bar. “We’re going to usher in a new era for Times Square,” Schrager declares. “Everything is going to change, and we’re going to be the first ones—you’re going to see more luxury hotels, more sophisticated retail, better restaurants.”

“Every great city in the world has a central place like Times Square,” Schrager continues. “But this is No. 1—this is the most important—so we shouldn’t turn our back on it.”

To contact the author of this story: Nikki Ekstein in New York at nekstein@bloomberg.net