Loyalty now the name of the game in the restaurant business: NPD's foodservice advisor

After more than three decades in the making, Tim Hortons said its iconic roll-up-the-rim-to-win contest will undergo a major revamp next year after sales fell in the latest quarter, and the retailer faces backlash from environmentalists over its disposable cups.

Tim Hortons President Alex Macedo told BNN Bloomberg the restaurant chain has been running the contest the same way since it started in 1986, while many things have changed for its customers.

“I think we need to refresh the program, and the fact it’s been losing a little bit of steam in its ability to drive excitement and traffic – I think is the biggest proof of that,” Macedo said in a phone interview.

A big part of refreshing the promotion that runs annually from February to April will be to move it online, according to its parent company Restaurant Brands International Inc. But, how will customers react to a shift away from rolling up the rim of a physical cup to win a prize?

An overhaul of the roll-up-the-rim contest is long overdue, retail and marketing experts say, and there are several ways Tim Hortons can revive the buzz around the program that was once a big driver of the company’s first-quarter sales. 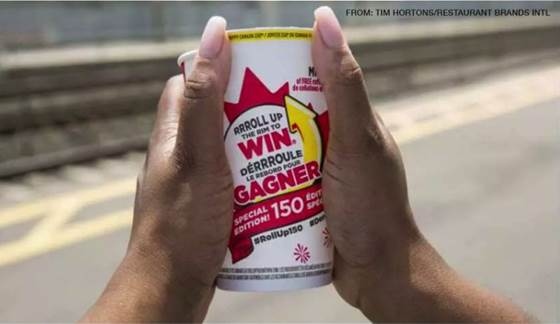 Are you more likely to participate in Tim Hortons’ roll-up-the-rim if the contest moves online?

The coffee-and-doughnut chain needs to think digital and market roll-up-the-rim in a way that’s sensitive to environmental concerns over disposable cups, according to some experts.

“They may want to consider expanding the program to include all purchases (not just coffee/tea), and make it digital [and] tied to their point of sale system,” Bruce Winder, co-founder and partner at Retail Advisors Network, said in an email interview. “So, when you buy something it automatically pops up a win randomly… [and has] less of an environmental impact.”

Sylvain Charlebois, senior director at Agrifood Analytics Lab at Dalhousie University, added that the roll-up-the-rim campaign has become an easy target for those concerned about the environment, especially in contrast to competitors like Starbucks Corp., which is searching for alternatives to plastic and paper cups.

“Environmental stewardship has more market currency, especially when looking at packaging and promotions … [Restaurant Brands] should be rethinking its approach as soon as possible,” said Charlebois in an email interview.

“A more digitized roll-up-the-rim program is highly desirable at this point. [Restaurant Brands] should empower its customers and give them options to go with normal cups, or not.”

Macedo said that there still might be a component of the physical cup in the contest next year, but it is going to play a smaller role.

But, while it might be an obvious strategy to move the contest to a more digital and social-enabled platform, Tim Hortons will face some challenges, according to John Yorke, president of marketing agency Rain43.

“[A digital contest] is not as tactile, and there is something fun about having to wait until you finish your beverage before you can find out if you won,” Yorke said in an email interview.

Tying roll-up-the-rim to Tim Hortons’ new loyalty program, which was launched across Canada in March, and the company’s app is another strategy the restaurant chain could take to attract customers, experts say.

Robert Carter, food service industry advisor at NPD Group, said the outlook for the loyalty program is strong, and app-based programs are where the restaurant industry is heading.

“The overall market is around 6.6 billion restaurant visits for Canadians – it’s not really growing,” Carter told BNN Bloomberg’s Jon Erlichman in an April 29 interview. “So, it’s really about making sure you’re existing customers come back more often, and stealing from the competitive sets.”

But, according to Yorke, Canadians’ strong loyalty to Tim Hortons has lost its lustre in recent years as the company ignored its overall brand to focus on product promotion.

He said the chain will have to provide greater loyalty rewards and prizes for early adopters of the new roll-up-the-rim in the short run to lure back customers.

“Prizing could change and provide regional experiential gifting with local athletes and celebrities,” Yorke said. “I think Kraft Hockeyville has been very successful in building communities, and Tims could tap into that ‘group win’ mentality.”

Kraft Hockeyville is an annual competition run by Kraft Foods and the National Hockey League, which invites community essay or video to prove their commitment to hockey. The winning community receives a cash prize to upgrade their local home arena and a chance to host an NHL pre-season game.

Yorke added that the much sought-after millennial demographic has proven to love personal experiences over products – so one-of-a-kind-experience prizes may also help Tim Hortons, which has traditionally marketed roll-up-the-win awards like cars, cash, bicycles and food items.

Winder said other experiential wins could include travel or activity-based prizes.

“Anything that can connect to loyalty will be the big winner over time,” said Yorke. “If that means spiffing up the prizes and experiences, it will come back tenfold.”