Can we treat strokes with alternative medicine? - BNN Bloomberg
{{ currentBoardShortName }}
Markets
As of: {{timeStamp.date}}
{{timeStamp.time}} 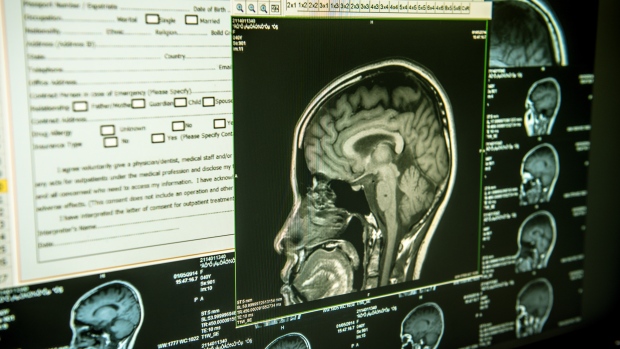 Unlike other companies recently researching psychedelic drugs, Algernon will be focusing on a sub-hallucinogenic, or microdose of DMT.

Ads and PSAs about strokes focus on what the average person needs to look for: facial drooping, arm weakness, and speech difficulties.

But what the average person doesn’t know about strokes is even more troubling.

According to the Centers for Disease Control and Prevention (CDC), almost 800,000 people suffer strokes each year in the United States — the global number is roughly 15 million — meaning on average, someone has a stroke every 40 seconds and someone dies of a stroke every four minutes.

Of those millions of strokes, about 87 per cent are ischemic, meaning they’re caused by a blockage of blood flow to the brain — the others are hemorrhagic, caused by bleeding in the brain. Treating ischemic strokes generally involves blood thinners that must be administered within three hours of the brain injury with the goal of clearing the blockage and minimizing brain damage.

This can only be done once the type of stroke is confirmed through a CT scan, and due to its time sensitive nature, only a tiny percentage of stroke patients receive such treatment.It is one thing to stop further injury from stroke, however, and quite another to repair damage that has already been caused by it.

“If you could treat patients within that three-hour window or before the CT scan, and it’s helping, it would be a blockbuster drug.” — Christopher J. Moreau, CEO, Algernon Pharmaceuticals Inc.

The company is poised to begin clinical trials early in 2022 on the use of N, N-Dimethyltryptamine (DMT), a psychedelic compound known as “The Spirit Molecule,” to treat people who have suffered ischemic strokes.

As a clinical stage drug-repurposing company that looks for new applications for drugs that are already approved and considered safe, Algernon is studying the use of sub-hallucinogenic amounts of DMT to promote the re-growth of brain cells in stroke patients, says its CEO, Christopher Moreau, who has more than 30 years of senior management experience in private and publicly traded companies, including a strong background in biotechnology research.

The paper’s results also showed growth of cells when DMT was applied, and the animal testing demonstrated that treatment produced in rats that were subjected to strokes showed smaller areas of dead brain cells and quicker recovery of motor function.

More recently, Moreau notes, Charles River Laboratories conducted pre-clinical research for Algernon at its facility in Finland, studying whether neurons exposed to different sub-hallucinogenic concentrations of DMT for an hour would show signs of growth, something researchers elsewhere, including Prof. David Olson of the University of California, had previously observed. The result? The cortical neurons that were subjected to DMT showed a 40 per cent increase in growth compared to control samples.

The purpose of these studies, Moreau says, is to identify a blood concentration (dose) and exposure time to target in the company’s Phase 1 study to optimize the neuroplastic effects of DMT without triggering hallucinations.

Clinical trials are set to start in the new year

That the desired effects take place without causing psychedelic effects is key for Algernon, Moreau says, noting that previous drugs being tested for stroke that caused hallucinations in patients were not advanced. After suffering a brain injury, which often causes a sense of confusion, sending someone on a psychedelic journey could be problematic.

While DMT is a controlled substance in most countries. there is, however, openness in some places to exploring its healing properties. In the United Kingdom, for instance, government regulators gave the go-ahead to the first clinical trial using a psychedelic drug to treat depression this year.

Also in the U.K., Algernon filed a scientific advice meeting request with the Medicines and Healthcare Products Regulatory Agency to conduct clinical stroke studies using DMT and reported that they received positive feedback from the agency.

With its application to conduct clinical trials set for Q4 of this year, Algernon has planned two phases of research: Phase 1, which is to begin in January 2022, will investigate safety and dose of DMT treatments; Phase 2 will additionally examine the use of DMT for acute stroke patients and as a supplemental treatment for patients as they begin their therapy post stroke.

Future research may also examine whether DMT can be used in treatment for hemorrhagic strokes, and that will depend on whether the drug is shown to not increase a patient’s blood pressure or heart rate. While this has been shown to be the case in Dr. Rick Strassman’s research (author of the book “DMT - Spirit Molecule” and Algernon consultant), Algernon would like to confirm this data in their Phase 1 study at various dose levels.

Algernon’s goal is to be able to treat stroke patients as quickly as possible — possibly via IV in an ambulance — meaning such treatment would not be dependent on a CT scan.

“If you could treat patients within that three-hour window or before the CT scan, and it’s helping,” Moreau says, “it would be a blockbuster drug.”

Key leadership added to Algernon’s board

Moreau is optimistic about the research and bullish on the company’s leadership, especially two relatively recent additions to its board of directors.

Dr. Mark Williams, a director, was a co–founder of the Algernon Pharmaceuticals drug repurposing program and was the company’s chief scientific officer until earlier this year. He has more than 15 years of experience in drug and medical device development, has authored multiple patents, and has expertise in taking companies from the discovery process to Phase 2 trials.

The other new board member is chairman and director Harry J. F. Bloomfield, a lawyer, Harvard MBA, and philanthropist who has served on numerous public and private boards, including that of Miraculins Inc., a medical diagnostic company where he also served as chairman.

“We’ve tried to surround ourselves with quality medical and scientific consultants who are living and breathing this space, and with Directors who can directly impact the company with their background and experience” Moreau says, noting, “I think we were lucky to have both join.”

With that help at the top and its clinical trials on the immediate horizon, Algernon is well-positioned to build value for investors.

“I think we have a very exciting and unique business model,” he says. “In the drug world, repurposing a drug that has a known safety history and trying to investigate it to find out if it has new potential uses, it’s very cost effective. And the drug can be brought to the market in under five years, compared to 13 years for a new chemical entity — and it holds all of the same potential as a new drug.”

And while DMT isn’t the only drug Algernon is researching — it’s also investigating ifenprodil as a potential treatment for coughs and idiopathic pulmonary fibrosis, a disease that causes scarring of the lungs — the psychedelic is squarely targeted at a massive and growing market.

Strokes are costly, and not just to the many people who suffer long-term disability as a result. Stroke-related costs totalled almost U.S. $46 billion between 2014 and 2015 alone in the U.S., says the CDC, a number that includes health care and medicine costs as well as missed work.

On the potential revenue side, the stroke treatment market was valued at approximately U.S. $8 billion in 2018 and is projected to reach a value of about U.S. $15 billion by 2027.

“We’re in a very good position,” Moreau says. “And we are planning to move into our Phase 1 DMT stroke trial in January, 2022.”

For more information on Algernon Pharmaceuticals, visit its website here.

Make sure to follow Algernon on social media for the latest news: