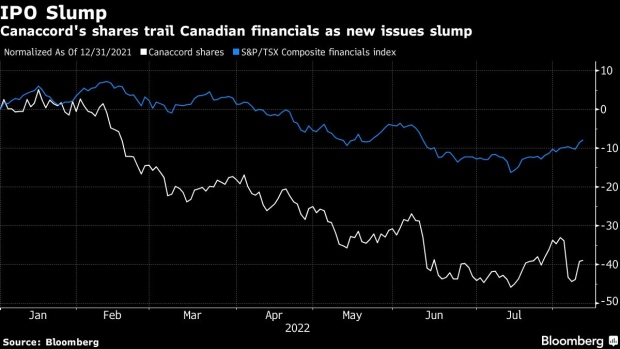 The US and Canadian job markets have already started to show some signs of weakness, and companies are likely to report weaker profit expectations during the round of earnings reports that start in October, he said. That will allow monetary-policy makers to reverse course on tightening in November or December, which may boost stock prices as well as investors’ appetite for shares of riskier, early-stage companies such as the ones Canaccord specializes in, Daviau said.

“Between job losses and companies reducing earnings estimates, that will give the financial authorities -- in Canada, the US and globally -- the ability to start saying they’ve increased rates enough,” Daviau said in an interview. “That will let them stop pursuing the aggressive hiking strategy they’ve been on. If that happens, this market is set to get back to work.”

But the current rally in stocks, which started in June, is built on expectations that central banks will start moving even sooner and “is not sustainable,” Daviau said.

The decline in investor interest in new equity has started to take a toll on Canaccord’s results. The firm last week reported fiscal first-quarter profit excluding some items of 11 cents a share, trailing analysts’ 31-cent average estimate. The net loss for the quarter was C$12.6 million ($9.9 million), compared with net income of C$69.7 million a year earlier.

Revenue tumbled 39% to C$317.4 million in the quarter ended June 30. Leading the decline was a 90% plunge in investment-banking revenue, to C$18.7 million, as new-issue volumes dried up. About C$38 million of the drop in revenue was due to declines in the market value of shares and warrants Canaccord was selling as part of its investment-banking activities, the company said.

The shares plunged 14% the day after the first-quarter report and are now down 39% this year, compared with a 5.7% decline for the S&P/TSX Composite Index.

While the outlook for new issues is weak, the firm’s merger-and-acquisition pipeline remains strong, Daviau said. Only highly leveraged deals, which aren’t a big part of Canaccord’s business, are likely to weaken substantially in the current environment of rising rates, he said.

Canaccord also will keep looking to invest in its wealth-management business, even though valuations for potential takeover targets remain persistently high despite the tumble in equity markets this year, he said.

“We’ll continue to grow the wealth business and deploy capital to do that,” Daviau said. “I wish prices would come down, but the economics work either way.”