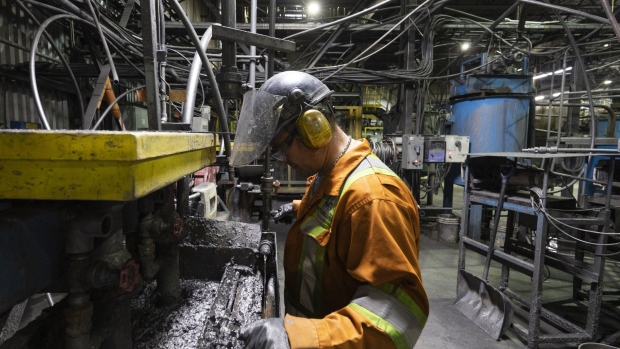 (Bloomberg) -- Canadian employment increased for a third straight month, but the small gain leaves the Bank of Canada’s options open as it heads into its last policy decision of the year.

The economy added just 10,100 jobs in November, while the unemployment rate dipped to 5.1% as the participation rate fell, Statistics Canada reported in Ottawa. The employment gains were in line with the median estimate in a Bloomberg survey, with economists expecting a jobless rate of 5.3%.

Friday’s tepid reading, which follows an increase of 108,000 jobs in October, suggests the nation’s recent rebound from a midyear labor-market slump may have been temporary.

But with the jobless rate falling back to near record lows and core-age employment showing momentum, the data will raise questions about whether the weaker employment gains are the result of demand slowing in Canada’s economy or a rapidly dwindling supply of labor.

Friday’s figures are the last key input into the central bank’s Dec. 7 rate decision. Overnight swap markets are fully pricing in a 25 basis-point hike next week, with traders putting about a one-third chance on a 50 basis-point move.

“There’s nothing here to obviously sway the Bank of Canada’s rate decision next week either way, but it’s quite clear that the labor market remains tight and in solid shape overall,” Doug Porter, chief economist at the Bank of Montreal, said in a report to investors.

The loonie fell sharply after the report but pared some of those losses, trading 0.4% lower at C$1.384 per US dollar at 10:57 a.m. in Toronto. Bonds also sold off, with the yield on benchmark Canada two-year debt jumping as many as 17 basis points from its pre-release level before settling back to 3.852%.

Rising wages are one factor putting pressure on Governor Tiff Macklem as the central bank tries to tamp down inflation. They showed no signs of cooling in November, with average hourly pay up 5.6% from a year earlier -- the same pace as in October. It’s the sixth straight month of increases over 5%.

The number of people working in construction fell by 25,000, reversing gains made in the previous month, while employment in wholesale and retail trade dropped for the fourth time in six months.

Regionally, Canada’s largest provinces led jobs gains, with Ontario and Quebec adding over 50,000 positions combined. Employment declined in all other provinces except for Nova Scotia.

Earlier this week, the Statistics Canada said third-quarter gross domestic product nearly doubled expectations with a 2.9% annualized gain. But a flash estimate for October suggested that momentum has stalled. Household consumption is slowing and housing investment has fallen amid rapidly rising borrowing costs.

Most economists expect the country to enter a technical recession early next year.

Macklem and his officials have already begun slowing down the pace of hikes, after increasing the benchmark overnight lending rate to 3.75% from the emergency pandemic low of 0.25% that held until March.

Women in their prime working years saw the biggest increase in employment: 81.6% of those aged 25 to 54 have jobs, a record. But the employment rate for younger women and older men declined.

Total hours worked were little changed from the month before, and up 1.8% from the prior year.