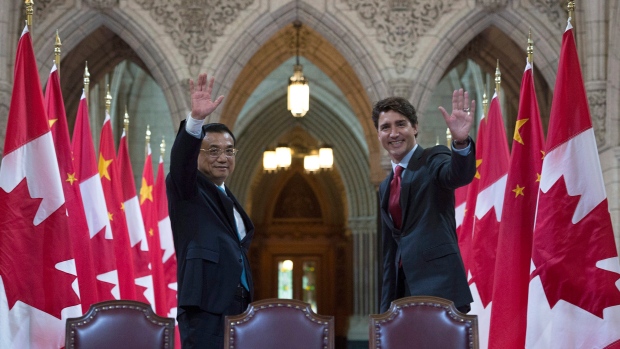 OTTAWA -- Canada and China announced on Thursday the start of exploratory talks towards a free trade agreement, while China's premier was forced to publicly defend his country's use of the death penalty.

As he welcomed Chinese Premier Li Keqiang, Prime Minister Justin Trudeau also said the two countries had reached an agreement to try to end a lingering dispute over Canadian canola exports by 2020, although he offered no specifics.

Li first told reporters during last month during the prime minister's own visit to China that the two countries had embarked on a feasibility study of a free trade deal. But Canada's ambassador to China later said that was premature because of issues involving labour, the environment and Chinese state-owned enterprises.

Those concerns appeared consigned to history Thursday, as Trudeau added that the two countries hope to double bilateral trade by 2025.

But irritants remain. Li and Trudeau both said they want to see a "science-based" solution to the canola impasse. The Chinese premier said experts from both sides will work towards solutions but in the interim "we will continue to apply the previous practice."

The dispute centres on the level of foreign material such as weeds, other crops and detritus that should be considered acceptable in Canada's canola exports to China. Canada sold $2 billion worth of canola seed to China last year.

Li also said China was lifting a ban on imports of beef under thirty months old that contain bone, a move that was immediately applauded by the Canadian Cattleman's Association as a $10-million annual gain.

Li said this reflected, "China's commitment to, and China's goodwill to, farmers and producers in Canada."

The premier is the first Chinese leader to visit Canada in six years and both he and Trudeau said it would be the first of yearly meetings between the two of them, all aimed at strengthening economic ties.

Both leaders acknowledged the thornier issues in their relationship -- simmering political opposition in Canada to a potential extradition deal with China because it practices capital punishment and has a questionable human rights record.

As well, there is the spectre of China's "Operation Fox Hunt" -- its international pursuit and harassment of so-called economic fugitives and other dissidents.

Standing next to Trudeau in the foyer of the House of Commons, Li denied his country sends foreign agents abroad.

But he calmly addressed head-on the issue of capital punishment in his country.

Li defended it, saying its use is overseen by his country's highest court. China has a large population, he explained, and that includes violent crime.

"It is consistent with our national condition," the Chinese leader said. "If we abolish the death penalty, innocent people will lose their lives."

Both leaders held a 90-minute meeting that went roughly 30 minutes overtime and was packed with officials from both countries, including several Canadian cabinet ministers.

Trudeau reiterated that with the two countries engaged in a high-level security dialogue, they now have a forum in which to discuss disagreements rather than the "ad-hoc" approach of the past.

"We are going to continue to have frank, honest discussions about the things that matter to our people and to the international community at large," Trudeau said.

But the overriding priority would be helping the middle class in both countries prosper, Trudeau added.

"The key is how to handle these differences," he said. "We need to always bear in mind the larger picture of our relations and we need to recognize that our common interests far outweigh our differences.'

Li and Trudeau appeared at ease with each other. At one point, when the simultaneous translation failed, Li encouraged Trudeau to continue talking, saying "I trust you." After Trudeau responded to some questions about his senior staffers' moving expenses, Li cut in to expound on how much he liked the French language.

Trudeau called the "historic nature" of their back-to-back visits to each other's countries a chance to deepen and strengthen the collaboration and co-operation between the two countries on a broad range of issues.

"I look forward to continuing the discussions on challenging issues, but also on all the opportunities that we know there are to create benefits for citizens of both of our countries," he said.

"I'm pleased to welcome you here to Canada and look forward to our working together."

Li arrived in Canada late Wednesday and visited informally with Trudeau at the prime minister's retreat at Harrington Lake.

A photo released by the Prime Minister's Office showed the two leaders lounging in the back yard with glasses of beer while one of Trudeau's kids hammed it up on a trampoline in the background.