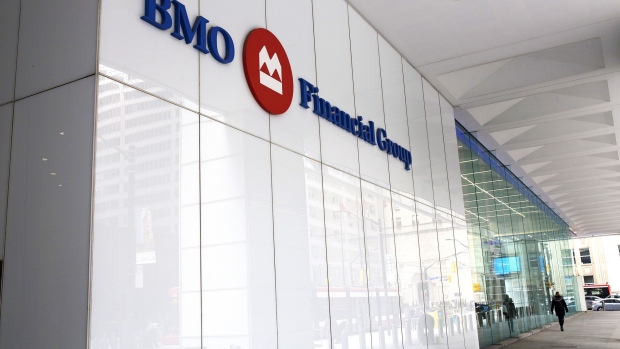 Bank of Montreal (BMO) Financial Group signage is displayed on a building in the financial district of Toronto, Ontario, Canada, on Friday, Feb. 14, 2020. Canadian stocks declined with global markets, as authorities struggled to keep the coronavirus from spreading more widely outside China. However, investors flocking to safe havens such as gold offset the sell-off in Canada's stock market. Photographer: Stephanie Foden/Bloomberg , Bloomberg

(Bloomberg) -- Canada’s banking regulator increased a key capital requirement for large banks — and raised the potential range of the measure — giving it more power to protect the country’s financial system from elevated risks.

The Office of the Superintendent of Financial Institutions said Thursday that it’s lifting the domestic stability buffer to 3% by Feb. 1, up from its current 2.5% level. The regulator also boosted the range of the buffer to as much as 4%, beyond the previous limit of 2.5%.

The measures show OSFI sees growing risks to the financial system — including rising household debt, persistent inflation and geopolitical turmoil — that require it to have more latitude to protect the financial system. Yet the economy is currently growing and loan losses are low, making this a good time to make banks build larger buffers that can later be released when stresses begin to materialize and they need to put the capital to work to absorb losses and maintain lending, the agency said.

“We’re seeing that loan growth is remaining stable, and we see delinquencies also remaining stable,” Angie Radiskovic, OSFI’s assistant superintendent and chief risk and strategy officer, said on a conference call with reporters. “We have seen a bit of an uptick recently in delinquencies, but that comes off a very low level to begin with.”

Canada’s five largest banks are sitting on about C$73.3 billion ($54 billion) in extra Common Equity Tier 1 capital beyond what regulators require them to hold, giving them ample capacity to absorb potential loan losses. That stockpile, however, is expected to decline over the next year as three of the firms complete major acquisitions.

Bank of Montreal shares fell as much as 2.3% Thursday, the biggest drop among any of the large Canadian banks, and touched their lowest point in a month in intraday trading. The lender, which is buying Bank of the West from BNP Paribas SA for $16.3 billion, is the most affected by OSFI’s announcement, according to National Bank of Canada analyst Gabriel Dechaine. Bank of Montreal could explore alternatives such as credit-risk transfers, assuming it hasn’t already reached an agreement with OSFI to achieve the minimum buffer “over several quarters,” Dechaine said.

Representatives for Bank of Montreal didn’t immediately respond to requests for comment.

The bank is not alone in expanding through acquisitions: Toronto-Dominion Bank is in the process of buying First Horizon Corp., and Royal Bank of Canada agreed to purchase HSBC Holdings Plc’s Canadian unit.

The increase to the domestic stability buffer brings the total capital cushion that the banks are required to hold to 11%. The decision to raise the buffer and increase its range is prudent and positive from a credit standpoint, said Himanshu Bakshi, an analyst at Bloomberg Intelligence.

“All banks are comfortably above the new hurdle of 11%, and we expect them to maintain a buffer of 50 basis points over the new hurdle,” Bakshi said.

The regulator reviews the buffer every June and December, and its last adjustment to the measure was an increase, in June 2021.

OSFI said in its statement that “systemic vulnerabilities remain elevated – with some, namely Canadian household indebtedness and asset imbalances, edging upwards.” The regulator added that persistent inflation and rising interest rates, along with geopolitical tensions, “have exacerbated vulnerabilities and led to increased economic uncertainty.”

--With assistance from Esteban Duarte and Geoffrey Morgan.