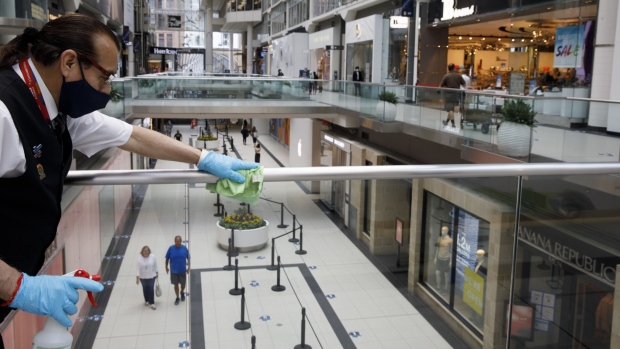 A worker wearing a protective mask cleans a railing at the Eaton Centre in Toronto, Ontario, Canada, on Wednesday, June 24, 2020. Canada's largest city has reopened restaurant patios, shops and swimming pools after officials determined that the Covid-19 virus is under control. Bloomberg/Cole Burston

Canada’s economy is crawling out of its deepest hole since the Great Depression, but the path will be long.

Numbers released Tuesday show an unprecedented 11.6 per cent plunge in gross domestic product in April, the first full month of lockdowns to curb the COVID-19 pandemic. That’s worse than the previous record drop of 7.5 per cent recorded in March.

It’s the fullest picture yet of what is likely to be a very short recession, with a flash estimate suggesting the economy is already bouncing back. But the report also reveals the damage was profound and will require years to reverse.

“The mindset has already shifted to people saying April is the trough,” said Beata Caranci, chief economist at Toronto-Dominion Bank. “The question is where to from here.”

The good news is the first month of recovery in May was also one for the record books. Activity surged as provincial governments began easing restrictions, with GDP rising 3 per cent, according to Statistics Canada’s initial estimate. That would be the biggest monthly increase ever and another strong gain is expected in June.

Yet policy makers, economists and businesses remain guarded and are warning not to assume these growth rates will continue beyond the reopening phase.

“Every time a province announces a reopening, you have those establishments rehire,” Caranci said by phone. “But it’s not like they continue to rehire -- they get a bit of an accordion effect of activity and then it kind of goes into a holding pattern.”

She said her team doesn’t expect a full recovery this year or next. Without widespread use of a vaccine, businesses are unlikely to operate at 100 per cent capacity. 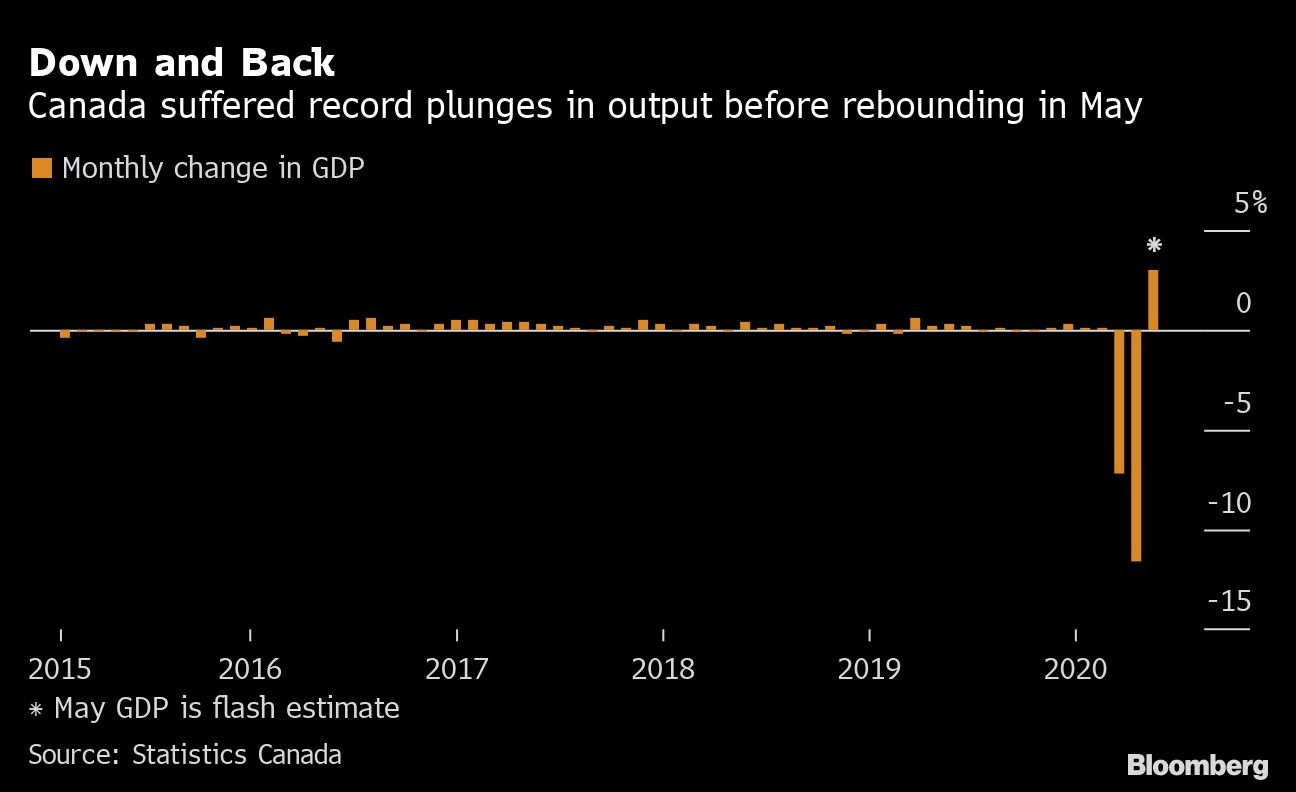 The March and April data are a litany of economic woe. The cumulative decline in output was 18.2 per cent -- almost eight times any previous two-month drop in records dating to the early 1960s. The economy -- hit both by COVID closures and collapsed oil prices -- saw a quarter of its labor force lose work or significant hours.

In response, Prime Minister Justin Trudeau has doled out $174 billion (US$127 billion) in direct spending so far, with programs ranging from an emergency cash benefit and wage subsidy to interest-free small business loans and commercial rent subsidies. That’s driving Canada’s budget deficit to five times the previous record, potentially sapping the government’s fiscal capacity to tackle a potential second wave of the virus.

The nation, meanwhile, is embarking on the path to recovery at a vulnerable time. Its oil sector is struggling. Its households are among the most indebted in the world. Immigration -- a key growth driver in recent years -- is being curbed by travel bans and closed borders.

And even though restrictions have eased, businesses are still reeling.

“It was almost like being hit by a tsunami,” Arlene Anderson, co-owner of The Original Maple Bat Corporation, an Ottawa-area sporting goods manufacturer, said in a telephone interview.

Anderson said the company’s sales dropped 85 per cent in April, forcing her to lay off all but two of her 12-person staff. Since then, she has been able to hire back several workers and sales have picked up but she still estimates June receipts are down 50 per cent from last year.

Because of the large hit to revenue, the baseball bat maker has survived by using government aid. Anderson said her company applied for the $40,000 small-business loan program and wage subsidy but has had trouble in securing rent relief. It was also one of 62 businesses in the country to receive a $10,000 grant from the Canadian Chamber of Commerce this week.

Trudeau’s government has won praise for getting money out the door quickly. Yet strains are beginning to appear. Fitch Ratings stripped Canada of its AAA status last week because of a spike in emergency spending for COVID-19, making it the first top-rated country to be downgraded during the pandemic.

The Bank of Canada, which has been financing the bulk of the new spending by buying up government debt, has spent the last few weeks trying to dampen expectations of a quick recovery.

Alberta’s oil patch, already hobbled by a lack of pipelines and provincial production limits, took a heavy blow in April as measures to combat the COVID-19 pandemic and a Russian-Saudi skirmish hammered oil prices, even briefly sending them negative. Economists expect crude prices to remain depressed for some time.

Another variable in Canada’s recovery is the cautious approach to reopening in two major cities -- Toronto and Montreal -- that became virus hot spots. The Toronto region, for example, has been very slow to open, only entering into the second phase as of last week. And the city accounts for four times as many jobs in the retail trade and wholesale sectors than the rest of Ontario, according to Caranci.

“Because the city is such an engine of growth for the province, if that engine stalls out, it’s very hard to get the rest of the province to make up that gap,” the TD economist said. “It’s just too big.”

The entire country will suffer as a result.