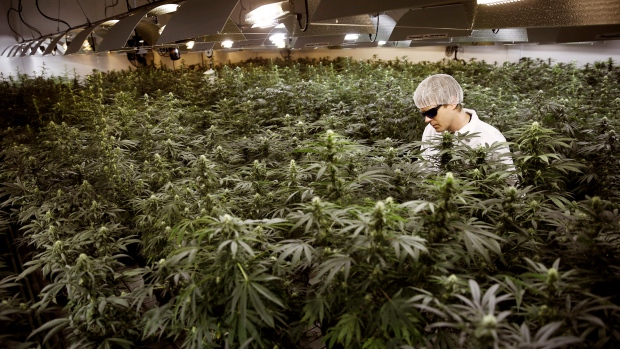 TORONTO/BENGALURU - Canada's marijuana stocks, which have surrendered some of the potent gains that pushed them to record highs this month, face a bumpy ride in 2018 that could purge smaller players, as the country moves to allow recreational use of cannabis in July.

Canada is set to become only the second country in the world, after Uruguay, to legalize the production, sale and consumption of recreational marijuana, and the country's nascent weed sector has been on a tear in anticipation.

But uncertainty over the scale of expected demand, selling prices that may be less attractive than the black market, initial supply hiccups, and even the chance legalization may be postponed, will weigh on the industry into 2018, analysts say.

"I think a bubble is being created here and the fundamentalsreally don't justify the valuations," said Chris Damas, editor of the BCMI Cannabis Report.

The four biggest stocks by market capitalization - Canopy, Aurora Cannabis (ACB.TO), MedReleaf Corp (LEAF.TO) and Aphria (APH.TO) - soared between 40 per cent and 143 per cent since the Constellation deal to highs earlier this month. MJIC Inc's Canada Marijuana Index is up over 30 per cent this year, versus the Toronto Stock Exchange benchmark's (.GSPTSE) 4.7 per cent gain.

BCMI's Damas said the big four pot companies are trading at an average price-to-sales ratio of 55, based on last quarter's annualized sales of $167 million.

Canopy, the only marijuana producer included in the S&P/TSX Composite Index, is trading at 57 times sales, the second-highest on the benchmark.

But investors are betting the jump in sales after legalization will justify the astronomical valuations, although sales projections range from under $5 billion to $10 billion a year.

The Canadian cannabis black market is estimated to be worth between $7 billion and $10 billion a year.

Bruce Campbell, portfolio manager at Stonecastle Investment Management, expects $9 billion in sales in 2020-21 from both recreational and medical use, versus the industry's $11 billion market capitalization.

The market value in a growing industry can be as much as five times sales, Campbell said. "Even if they trade at two times sales, they could have another C$7 billion of market gain over the next few years," he said. Stonecastle owns shares in Canopy and MedReleaf along with some smaller pot companies.

"There probably won't be as much sales in Canada as people are expecting at first," he said. "The size of Canada is extremely finite. There are a lot of companies competing, and they aren’t going to make it by just focusing on Canada."

Bigger companies are more likely to attract capital from global investors and expand overseas, he said.

Brochstein expects intermittent pullbacks but expects the sector to trade in a higher range than in 2017 before legalization.

The inevitable consolidation will underpin the survivors' stocks, analysts said. This month, Aurora launched a bid for smaller rival CanniMed Therapeutics (CMED.TO), which in turn is set to buy Newstrike Resources (HIP.V).

Most analysts are bullish on the industry's long-term prospects, given Canada's early mover advantage.

"We expect a pullback in the sector as is typical after any significant runup in stock prices," said Jason Zandberg, special situations analyst at PI Financial Corp. "We believe there is still long-term growth in the sector but many of the smaller pot companies may not survive when competition heats up."