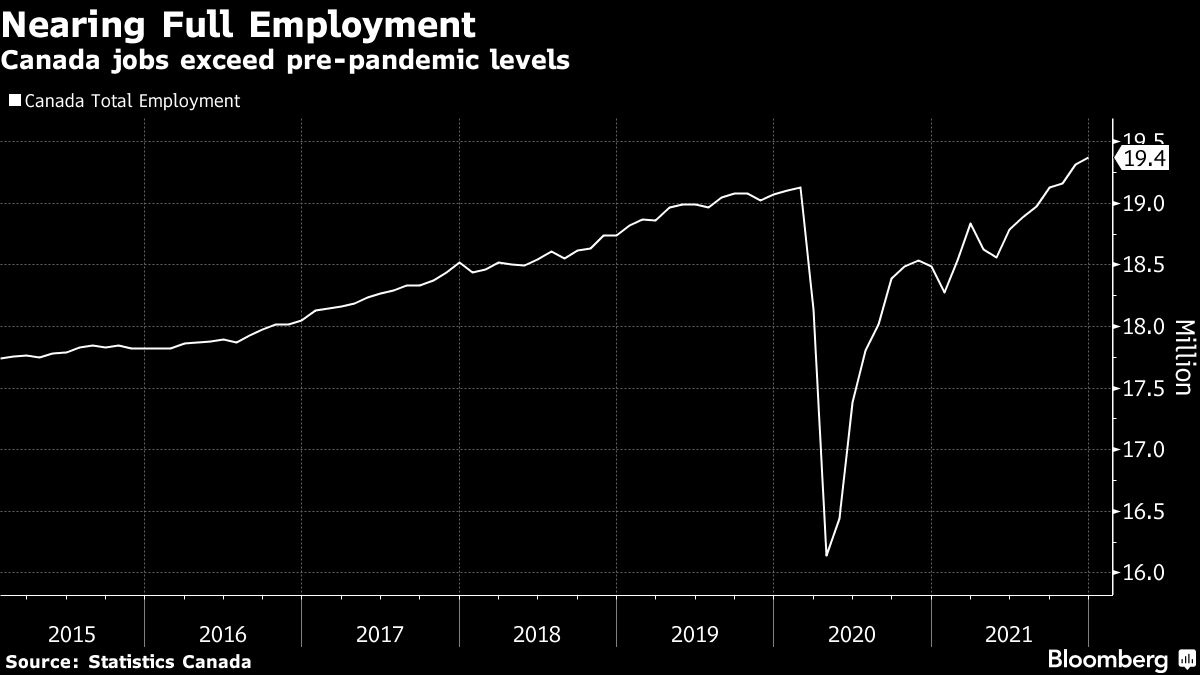 The report adds to evidence economic conditions were strong in the final weeks of 2021, before the country was hit by a wave of COVID-19 cases and fresh lockdowns. The nation created 886,000 new jobs for all of 2021, a record year. After losing 3 million jobs at the start of the pandemic, employment is now 240,500 above where it was in February 2020.

The jobless rate fell to 5.9 per cent in December, from 6 per cent in November -- also near historic lows.

“It’s certainly a very healthy number for December -- not quite the pace that we’ve seen in the past several months, but that’s to be expected with the economy nearing full employment,” Josh Nye, senior economist at RBC Capital Markets, said in an interview with BNN Bloomberg.

Friday’s data will only cement expectations that interest rates are poised to increase very soon. Markets are pricing in five Bank of Canada rate hikes this year, beginning as early as this month when policy makers make their first decision of 2022 on Jan. 26.

While bank officials have pledged not to raise borrowing costs until the labor market has fully recovered, there’s little in the data that suggests there’s much slack left.

The percentage of the population employed -- at 61.5 per cent -- is just under pre-pandemic levels. So are participation rates, with little sign of long-lasting damage to the economy from the widespread lockdowns and closures last year, at least in aggregate. Average hourly wage rates are up 2.7 per cent from a year ago, unchanged from November but stronger than the 2 per cent clip recorded in October.

“Strong data more likely prompts the Bank of Canada to open the door for a March hike,” Benjamin Reitzes, macro strategist at Bank of Montreal, said by email.

Public sector employment was a big factor behind the gain, rising by 31,600 in December. The number of employees in the public sector was 307,000 above pre-pandemic levels.

The country created 27,100 construction jobs in December, the first increase since August, while manufacturing also posted a healthy gain of hirings.

To be sure, the emergence of the omicron variant will hamper the expansion at the start of this year. Canada has seen an exponential rise in COVID-19 cases in recent weeks, prompting authorities to shut down high-contact sectors.

The impact of those restrictions won’t be reflected in the data until January numbers are released next month, since the December survey was taken between Dec. 5 and Dec. 11. Yet, over the past two years, Canada’s economy has shown a tremendous amount resilience through successive waves of lockdowns and that’s unlikely to change.

Even though a slowdown is inevitable, economists are still anticipating a strong 2022, with the jobless rate expected to fall to an average of about 5.8 per cent, according to estimates in a Bloomberg News survey last month. That would bring it near five decade lows.

The bulk of this year’s gains will be driven by newcomers to the country, rather than the pandemic unemployed returning to the workforce. Prime Minister Justin Trudeau’s government plans to increase immigration levels this year to new highs, while foreign students have begun to return after border restrictions were lifted last year. Employment of native-born Canadians has been flat for almost a decade.

If the recovery doesn’t stall, workers shortages are likely to become the big labor market issue for 2022.

“We’re not going to be able to add 100,000 jobs month in and month out,” RBC’s Nye said. The jobless rate falling below 6 per cent is an “indication that we’re probably nearing full employment.”