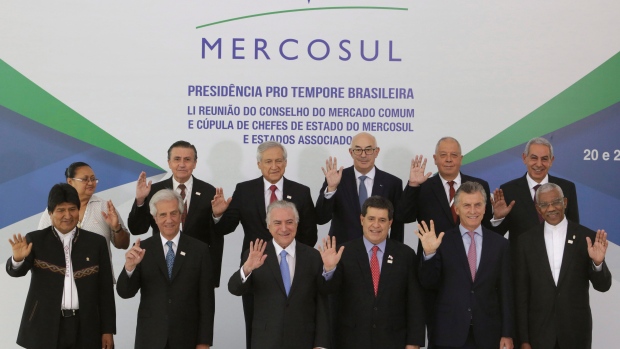 A spokesman for International Trade Minister Francois-Philippe Champagne says the negotiations could begin in earnest in the next 10 days.

That announcement will come after Champagne formally signs the reconstituted and much larger Trans-Pacific Partnership agreement later today in Santiago, Chile.

Champagne's spokesman Joseph Pickerill says the progress on both deals is a positive sign that Canada's efforts have paid off to diversify its international trade portfolio in the face of growing uncertainty with its top trading partner, the United States.

This week's inroads into the Pacific Rim and South America come as U.S. President Donald Trump threatens to levy stiff tariffs on steel and aluminum, and with persistent uncertainty continuing to plague the renegotiation of the North American Free Trade Agreement.

Canada was able to win exemptions on digital content in the renegotiated TPP, but the government has faced heavy criticism from Canadian auto workers and manufacturers for signing side deals with Japan, Australia and Malaysia on automobiles.

The signing of the new 11-country TPP marks the culmination of a massive salvage operation that kicked into gear after Trump pulled the United States out of the deal immediately after being sworn into the Oval Office last January.

The new TPP -- known as the Comprehensive and Progressive Agreement for the Trans-Pacific Partnership -- will give Canada access to a market of 1.7 billion people, comprising 13 per cent of the world's gross domestic product.

Mercosur is much smaller -- just 260 million consumers -- but would deliver Canada a deal with Brazil, the biggest country in the Mercosur bloc, which also includes Argentina and Uruguay.

Pickerill said the Mercosur countries "are keen (on) Canada's approach to trade and are prepared to do a more comprehensive deal than was ever on the table in the past."

But striking a deal with Mercosur won't be easy, said Carlo Dade, an expert on Latin American affairs with the Alberta-based Canada West Foundation.

That's because Brazil and Argentina have been reluctant to talk free trade with Canada in the past, and though they've opened the window, uncertainty remains, he said.

Potential irritants with Brazil include its likely demands for greater access for its beef into Canada, and the ongoing aerospace dispute between Canada's Bombardier and Brazil's Embraer, he added.

"This is going to be a tough negotiation. Brazil is a large market, so is Argentina," said Dade. "With Argentina, it's a small window. It's a soap opera that changes every week. And this week we've got a government that wants to talk to us."

He won power in 2015, unseating Cristina Fernandez, who -- along with her ex-vice president -- is embroiled in a corruption scandal after eight years in power.