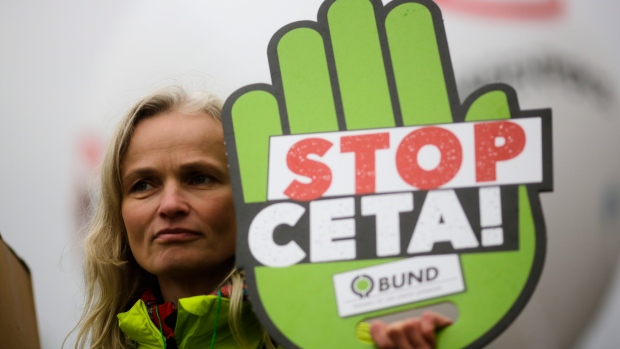 A demonstrator holds a poster against the Comprehensive Economic and Trade Agreement, CETA, during a protest in front of the chancellery in Berlin, Wednesday, Oct. 12, 2016. , AP Photo/Markus Schreiber

OTTAWA -- Canada has dispatched its special envoy on its trade deal with the European Union to meet leaders of the Belgian region that voted to reject the deal.

Pierre Pettigrew, a former Liberal trade and foreign minister recently appointed by the current Liberal government, is off to Paris to meet representatives of Belgium's Wallonia region after its legislature voted earlier today to reject the agreement, known as CETA.

Prime Minister Justin Trudeau, meanwhile, says he is confident the trade agreement will make it through.

"I'm confident that there are so many strong European countries like France, as we saw yesterday, Germany is fully on board and others, that this deal is going to make it through," Trudeau said in Medicine Hat, Alta., where he is campaigning in a byelection race.

A spokesman for Trade Minister Chrystia Freeland says Canada continues to push with its European partners to get the deal signed.

"We continue to say this is an excellent agreement for both Canada and the EU that will deliver positive results and real opportunities for citizens in Canada and citizens in the EU," spokesman Alex Lawrence said in an interview.

EU trade ministers meet next week to consider the pact.

The following week, Trudeau is to meet his EU counterparts at a summit in Brussels where the two sides are expected to sign the deal.

The prime minister said Friday his government has put a lot of effort into improving the agreement.

"We demonstrated that we are a progressive country that pulled together one of the most progressive trade deals ever proposed anywhere in the world," he said.

"It's actually a new standard for the kinds of trade deals that will demonstrate that it's good for ordinary citizens and small businesses, not just big companies and the country's bottom line."

He said it's been clear that winning approval was going to take a lot of work, but he thinks that has been done.

On Thursday, Trudeau had sharp words for Europe as the Walloon roadblock loomed on the horizon.

He said it would be a "shame" if the deal couldn't be signed.

Lawrence echoed those comments Friday after the vote in Wallonia.

Freeland's parliamentary secretary, David Lametti, met Walloon leaders and politicians for the second time in a week on Thursday, travelling to the region for talks. This past weekend, Lametti met a travelling Walloon parliamentary delegation in Ottawa.

But Friday's result made clear he was not successful.

Paul Magnette, the Wallonia leader, said Friday his region would not give Belgium's national government the support it needs when the EU's 28-member states meet next week.

The Wallonia vote has created headaches for Belgium's national government because the Belgian constitution gives its three regional governments -- Wallonia being one of them -- a potential veto over the deal, which has been seven years in the making.

Senior European officials have told The Canadian Press that the obstacle thrown up by Wallonia is the single greatest remaining threat to CETA as it enters its final stages.