Canada’s economy recorded what are likely its last strong months of growth in August and September, as the country braces for an end-of-year slowdown.

Gross domestic product expanded 1.2 per cent in August, Statistics Canada said Friday in Ottawa. The agency also released a preliminary estimate for September, which showed a 0.7 per cent expansion -- a fifth straight month of historically elevated readings as the economy rebounded from a sharp contraction from the COVID-19 lockdowns. 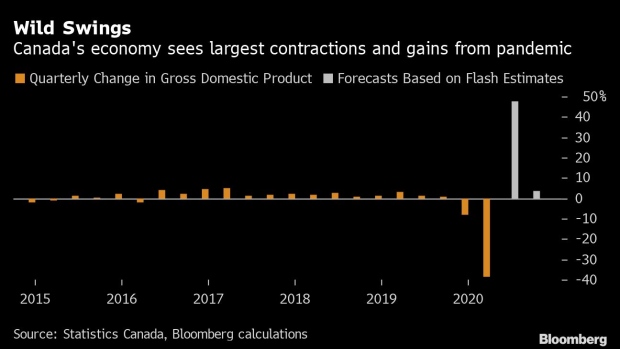 With September figures in, the data suggest the economy grew 10 per cent in the third quarter, the agency said, implying about 46 per cent growth on an annualized basis -- which would be an all-time high.

“The numbers are solid overall,” David Doyle, an economist at Macquarie Capital Markets, said by email.

But things will get much slower from here. This week the Bank of Canada projected annualized growth of only one per cent in the final three months of the year, and reiterated expectations for a drawn out recovery over the next several quarters.

Canada’s currency appreciated slightly on the report, rising 0.2 per cent to $1.3295 against the U.S. dollar at 9:07 a.m. Toronto time. The yield on government two year bonds was little changed at 0.25 per cent.

The numbers suggest economic activity in September was about 96.1 per cent of output levels in February.

Economists were expecting 0.9 per cent growth in August, according the the median forecast in a Bloomberg survey.

Warmer weather, lower virus counts and mass re-openings encouraged a surge in retail spending between July and September. In addition, pent-up demand for housing led to a boom in construction and real estate in the third quarter.

The September reading is still a “solid starting point” for the fourth quarter, Derek Holt, an economist at Bank of Nova Scotia, said by email. He estimates a fourth-quarter gain of 3.5 per cent annualized, compared with the Bank of Canada’s one per cent estimate.