Canada’s economy extended its streak of monthly gains in February, reinforcing expectations the nation’s central bank is poised to embark on one of its most aggressive tightening cycles ever to curb three-decade high inflation.

Gross domestic product rose a ninth-straight time last month, increasing 0.8 per cent, according to a preliminary estimate from Statistics Canada published on Thursday. In January, the economy expanded by 0.2 per cent, the agency said.

Overall, the report adds to evidence the economy was surprisingly resilient at the start of 2022 in the face of COVID-19 restrictions meant to contain the spread of the omicron variant, and even boomed as authorities lifted the lockdowns in February. 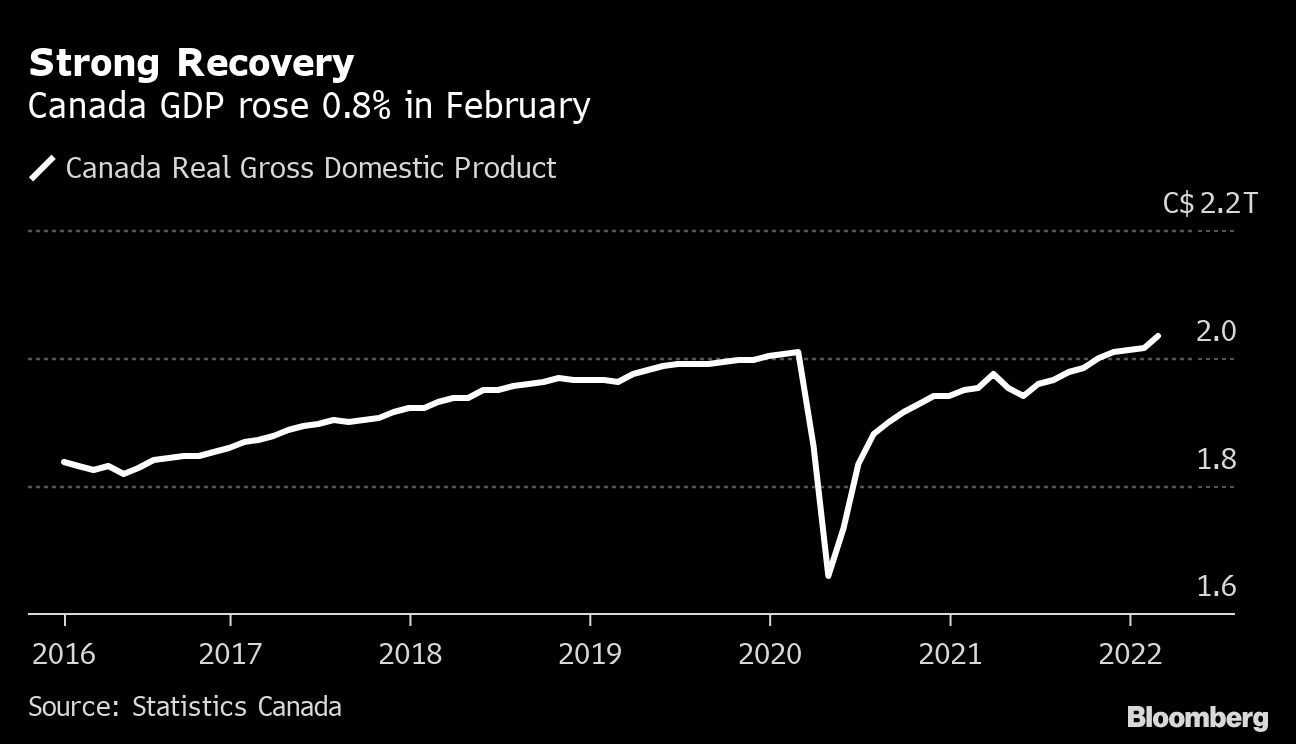 The economy is on track to grow at an annualized pace of more than 4 per cent in the first quarter, which is twice the pace the Bank of Canada had been projecting as recently as January. Central bank officials estimate the country was already at full capacity at the end of last year, after the economy grew at a strong annualized 6.7 per cent pace in the fourth quarter.

“Heading into the year, some slowdown in activity was expected due to the pandemic restrictions, but, unlike in past waves, that wasn’t the case,” Benjamin Reitzes, head of Canadian rates and macro strategy at BMO Capital Markets, said in a report to investors.

The Canadian dollar was little changed after the report, holding on to losses from earlier in the day. The currency was down 0.3 per cent $1.2520 per U.S. dollar at 9:11 a.m. in Toronto trading.

Central bank officials led by Governor Tiff Macklem began a tightening cycle with a 25-basis-point hike earlier this month in an attempt to bring inflation back under control.

Some economists now expect robust growth -- with strong consumption trends, a hot jobs market and broadening price pressures -- will push policymakers into an even more hawkish stance. Bank of America and Citigroup are now forecasting a 50 basis-point hike at each of Macklem’s next three decisions.

In February, output gains were led by the manufacturing sector, oil and gas extraction, accommodation and food services, and construction, the statistics agency said. While the omicron outbreak continued to hit services-producing industries in the first month of this year, nine out of 20 industrial sectors expanded in January.