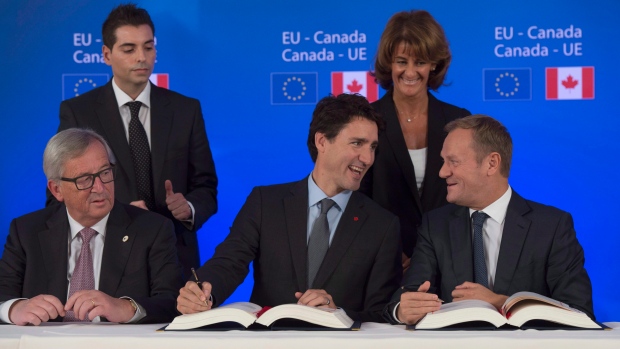 The European Commission and the Canadian government appealed on Tuesday for other trading partners to join their planned investment court, which they see as the answer to a major criticism of global trade deals.

Canada and the Commission, which negotiates trade agreements for the 28 EU members, have committed to setting up a permanent investment court to settle disputes, but need to bring in others for this to be a truly international body.

Both invited some 200 trade officials from 42 countries including the United States, China, India, Mexico and Argentina and others in Asia and Africa for a discussion of its idea at the World Trade Organization in Geneva on Tuesday and Wednesday.

"We're not trying to force this on other countries," said a Commission source, adding that the court would need more participants than just the EU, Canada and Vietnam, whose trade deal with the EU also refers to such a court. "It will be not be 150, but we're looking at more like 10, 15, 20."

Trade deals have come under fire in the West in a growing backlash against globalisation, partly behind the U.S. election victory of Donald Trump. He has sounded a more protectionist tone and said he will withdraw the United States from the 12-nation Trans-Pacific Partnership (TPP) on his first day in office. U.S. participation in the trade court seems doubtful.

The planned court is the response to criticism that the investment dispute settlement system (ISDS) in some 3,200 existing bilateral investment deals gives multinational companies too much power.

Investor protection has been focus of protests against the EU-U.S. Transatlantic Trade and Investment Treaty (TTIP) still under negotiation as well as the EU-Canada Comprehensive Economic and Trade Agreement (CETA), which has been agreed but awaits ratification by participating countries.

Critics say ISDS gives foreign companies special rights. Rather than using domestic courts, they can take states to ad-hoc tribunals, some of whose arbitrators are appointed by the companies or may suffer from conflicts of interest.

ISDS is designed to ensure fair investment conditions and prevent abuses by states, but protest groups say multinational corporations can use it to dictate environmental or labor standards to states with the threat of legal action.

The European Commission has agreed to an alternative investment court system in its trade deals with Canada and Vietnam. The system would have judges appointed by the trading partners and include an appeals mechanism.