How immigration may play a huge part in Canada's economic recovery

Prime Minister Justin Trudeau’s government is trying a new tactic to mitigate the economic damage from a dramatic drop in immigration: persuade foreigners already in the country to stay.

Canada announced plans last week to make it easier for the more than 1 million temporary students, workers and asylum seekers now living in the country to become permanent residents, giving them a path to citizenship. In an interview Monday, Immigration Minister Marco Mendicino said it’s the logical way forward to make up for a decline in foreigners moving to Canada during the pandemic.

“For those who are already in Canada and here on a temporary basis, it behooves us to see whether or not there’s a way to accelerate their pathway to becoming Canadian,” Mendicino told Bloomberg.

Declining immigration is another blow to a Canadian economy that has relied heavily on foreigners to drive labor force growth and demand, particularly in major cities. In Toronto, for example, the drop in newcomers is already generating cracks in the city’s condo market.

Canada relies on two tracks of migration in any given year: permanent residents and a much larger group of temporary residents. Both are down dramatically. 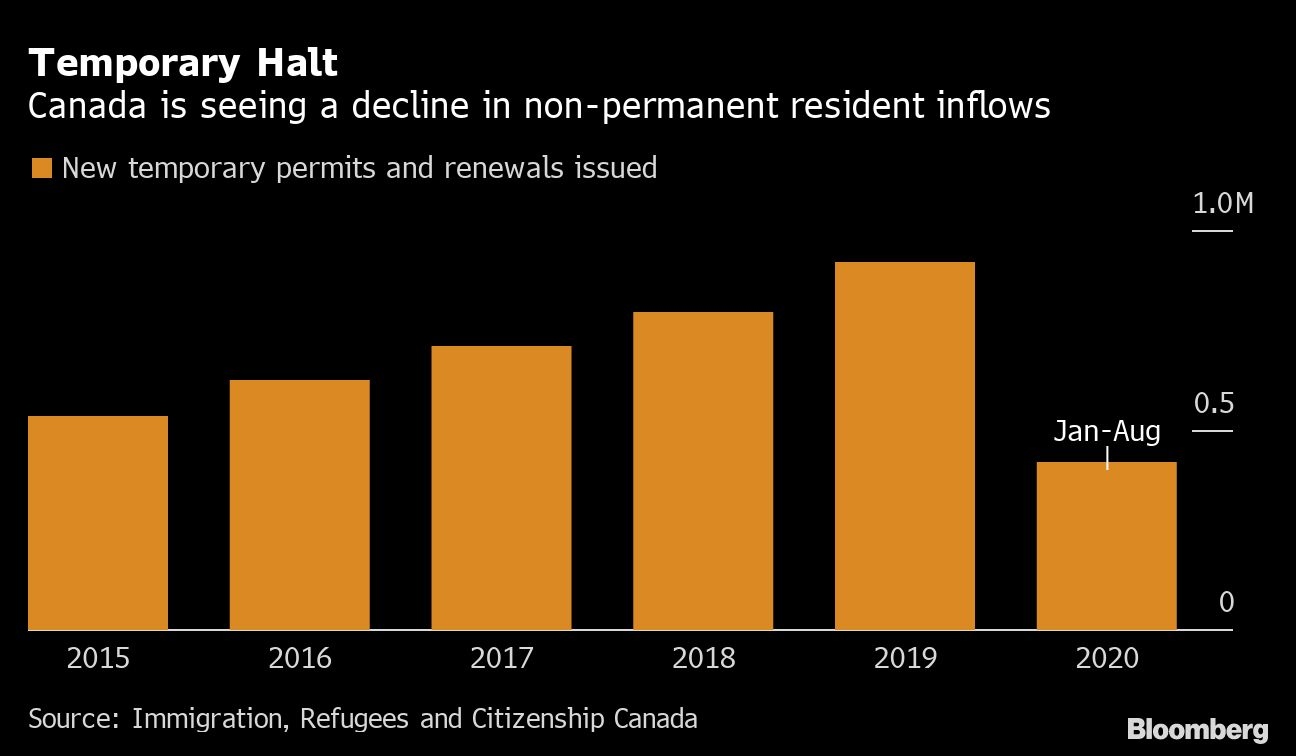 After recording a net increase of 190,952 temporary residents last year, the first six months of 2020 has seen a net decrease of 18,221, according to Statistics Canada data.

That’s having an impact on Canada’s total population, which grew just 0.1% in the three months through June, the second-lowest quarterly gain in records dating back to 1946.

Many migrants work in essential services like health care, where capacity is currently being tested, Mendicino said. Making temporary residents permanent will address Canada’s short-term needs to respond to Covid-19 and help the country address the longer-term demographic challenges, the minister said.

The government will be looking “at that domestic immigration pool in very short order to identify the workers, the students, the asylum seekers who have the skill sets that align with essential services in the economy,” he said.

Students from other countries are particularly attractive as a potential counter to the aging population, and the government is making it easier for them to work in Canada, the minister said. Even before last week’s announcement, universities were given permission to have foreign students on campus as long as they agreed to abide by COVID-19 protocols.

“International students who tend to be a younger population, who tend to be right at the outset of their careers having a longer period within their lifespan to contribute and they are a very attractive pool that we’re going to look very closely at,” Mendicino said.