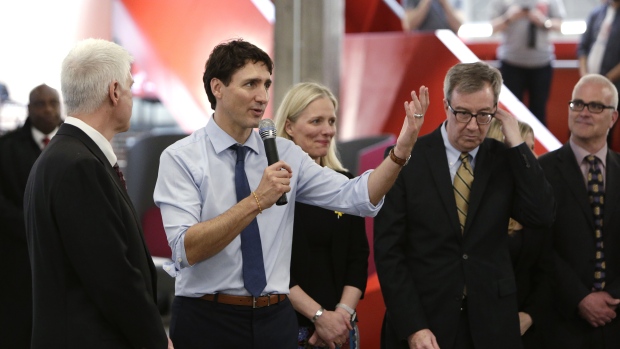 Canada has a complex relationship when it comes to foreign investment from its southern neighbour, and is now facing calls to safeguard another key sector.

Americans hold large chunks of Canada’s resource, manufacturing and retail industries, yet U.S. companies are largely excluded from key sectors like banking, broadcasting and telecommunications that are seen as strategic or sensitive.

A growing chorus of prominent Canadians has begun to wonder whether that list of protected industries should widen to include technology. The latest call comes from two of the more influential federal policy makers of the past decade -- Sean Speer, a long-time Conservative, and Robert Asselin, a Liberal.

Speer was one of the top economic advisers under Stephen Harper’s Conservative government. Asselin was a long-time aide to Prime Minister Justin Trudeau and the main policy adviser to Finance Minister Bill Morneau for two years, before joining BlackBerry Ltd. as senior policy director.

Both men sit on the pragmatic wings of their respective parties, and neither is an economic nationalist. But in a report Thursday for the Public Policy Forum, Speer and Asselin raise red flags about the loss of intellectual property to foreign players and outline the potential hit to the nation’s competitiveness in a world increasingly driven by data and other types of “intangible assets.”

Their conclusion: the government should do more to keep IP and data in Canada, encourage the development of Canadian-based technologies and protect them from foreign takeovers. This includes stemming the use of public funds for research by foreign tech companies, using public procurement to buy technology from domestic firms and toughening criteria for foreign acquisitions that have negative impacts on the “broader innovation ecosystem.”

“Creating innovation assets and then divesting them before commercialization or losing out on the potential to grow companies to global scale is a failure of innovation policy,” Speer and Asselin said in the report. “This is the difference between being a landlord nation of the new intangibles economy or a tenant nation.”

While their concerns aren’t directed at the U.S. -- Chinese companies like Huawei Technologies Co. are also active in Canada -- Americans are central players in the country’s tech sector and Canadians have been willing partners. In fact, Trudeau fashions himself as the salesman-in-chief for the industry, and visited Silicon Valley last year to drum up new business.

And it’s worked. Foreign investment into the sector has surged. Data compiled by Bloomberg show foreign acquisitions of Canadian software and Internet-based companies has totaled US$8.7 billion in the three years starting 2016 -- more than three quarters by Americans -- versus just under US$3 billion between 2012 and 2015. U.S. venture capital is also a major source of start-up funding, participating in about one-third of all such investments in Canada last year, according to an industry report.

It’s the sort of interest that would typically be welcome in most old economy sectors. But Speer and Asselin argue the economics of knowledge-based growth -- which is premised on the idea of generating rents from intangible assets -- require a different set of rules. In this economy, once these assets are lost, the benefits to a nation dissipate. 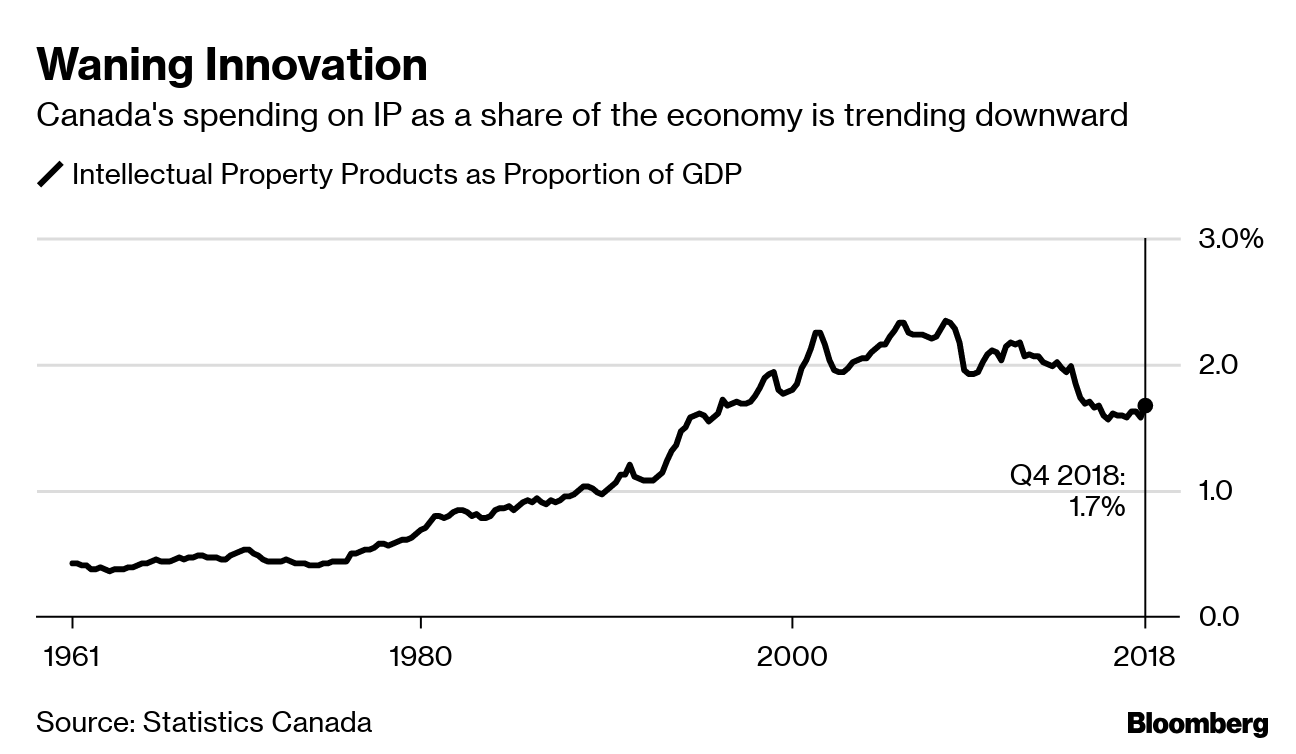 And Canada has had a middling performance in the intangible economy. Speer and Asselin calculate the share of market capitalization on the country’s stock exchange represented by non-physical assets is below both the U.S. and Europe. Recent figures also show a “significant decline” in the number of Canadian patents over the past decade, according to the report.

Data compiled by Bloomberg show there are no Canadian companies among the world’s top 200 spenders on research and development. Spending on IP products reached an annualized $34.6 billion (US$25.9 billion) in the fourth quarter, according to Statistics Canada, or about 1.7 per cent of the economy. That’s down from about 2 per cent in 2014.

Some of the report’s most pointed criticism is directed at a system where publicly-funded universities in Canada partner with major global tech companies, who end up owning the intellectual property developed in the country.

“Ensuring that IP generated in Canada with taxpayer funding is available to Canadian innovators is critical to beginning to boost our innovation outputs,” Speer and Asselin found.