Millennial Monday: How cannabis producers are building their brands in the U.S.

Canada has a challenger to its status as the pot-stock capital of the world -- the scrappy over-the-counter market in the U.S.

There are now 136 cannabis-related securities on OTC Markets Group Inc.’s main and venture market. That compares with 144 companies on Canadian exchanges.

With marijuana illegal at the federal level in the U.S., the big exchanges like the NYSE and the Nasdaq only allow listings from companies that don’t have American operations, including five Canadian producers. Rules on the New York-based OTC markets are less stringent and allow companies on qualified foreign exchanges to trade without registering with the Securities and Exchange Commission. Fees are also lower.

“The exchanges are very risk averse. They’re old, staid institutions,” Jason Paltrowitz, executive vice president of corporate services at OTC Markets, said in a phone interview. “We want to be the market for entrepreneurs.”

The OTC’s growing presence in the cannabis space is aided by a partnership with the Canadian Securities Exchange, jokingly referred to as the Cannabis Securities Exchange for the zeal with which it’s embraced the industry. Formerly focused on junior miners and energy companies, pot stocks now make up about a quarter of the CSE’s approximately 450 listings. Of those, 116 trade on OTC markets, including 13 pot stocks on the top-tier OTCQX.

“For the companies that aren’t in the billion-plus market cap range, the benefit from being listed on an exchange is minimal to non-existent,” Paltrowitz said.

Canadian exchanges have a head start in heft. Those 144 companies listed in Canada have a have a market value of about $57 billion, including Canopy Growth Corp., which is worth $12.2 billion and Aphria Inc. at $4 billion. The 136 cannabis companies on the OTC markets range are worth $16 billion, ranging in size from MedMen Enterprises Inc., which is worth $2.6 billion, to penny stocks like Global Hemp Group Inc., with a market value of about $16.3 million.

Although dual-listing on the NYSE or Nasdaq provides a higher profile than the OTC, it can also draw trading volumes away from the home market. By contrast, a 2017 study commissioned by OTC found that firms listed on Canadian exchanges saw a 35 percent increase in average daily trading volume in their home market after joining OTCQX.

This is because the OTC’s dealer-market structure allows market makers to execute a U.S. investor’s order north of the border, meaning the trade will print on the Canadian exchange, Paltrowitz said. This improves the “overall market quality,” according to Richard Carleton, chief executive officer of the CSE. 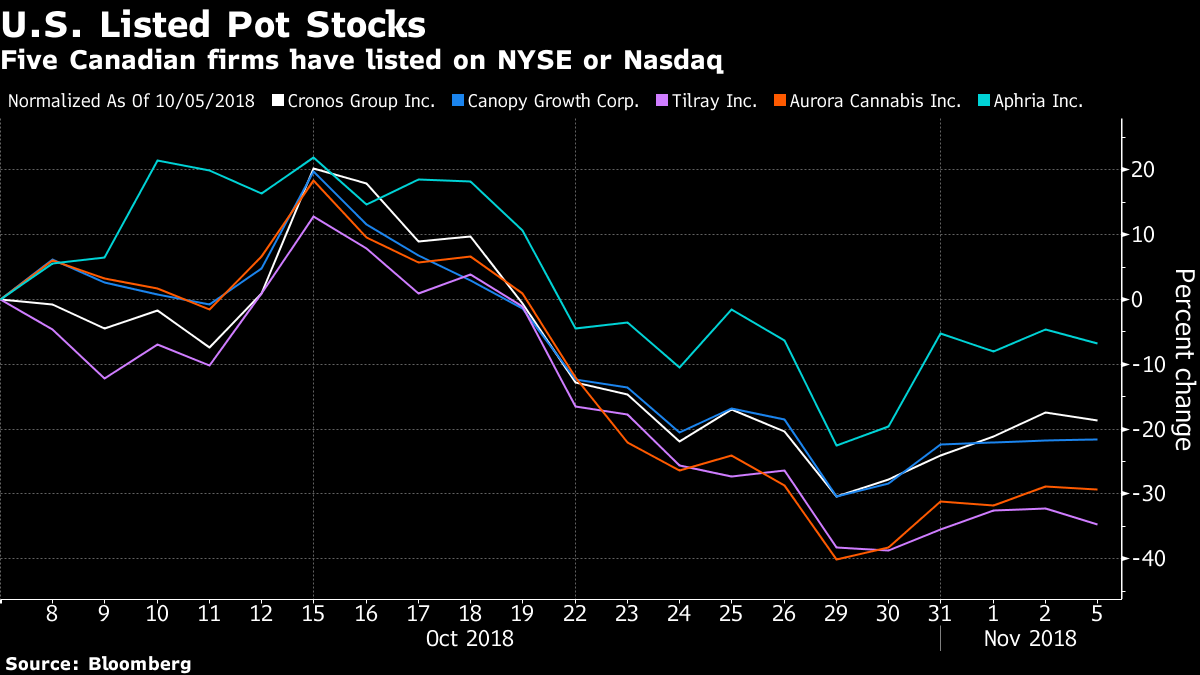 “We believe, both anecdotally and now empirically, that it’s accretive to volume,” Carleton said. “We see tighter spreads and the depth of the market improves, as well as volume of stock at each level of the market.”

Cross-listing allows cannabis companies to access U.S. investors while continuing to tap capital markets in Canada, which legalized recreational pot last month and has led deal-making and financing in the global marijuana industry. This has aided growth at U.S.-focused pot companies like MedMen Enterprises Inc., which can’t list at NYSE or Nasdaq. MedMen trades on the CSE and OTCQX.

The CSE listing provided early access to capital and a knowledgeable pool of investors, while OTCQX “provides a number of complementary benefits including an efficient trading platform, increased liquidity and better access to a growing U.S. investor base,” MedMen spokeswoman Briana Chester said in an email.