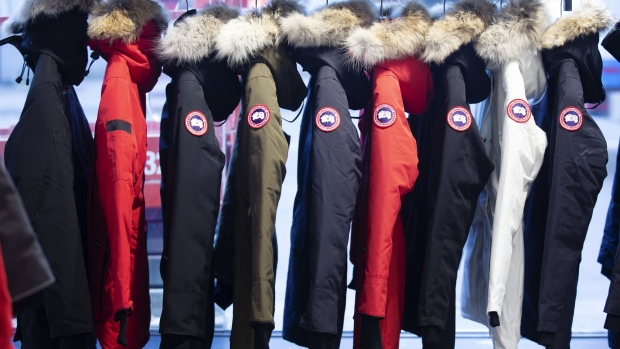 Canada Goose Holdings Inc. (GOOS.TO) fell 4.7 per cent on a report that it backed off claims of ethical treatment of animals used to make winter clothing following a regulatory review of its marketing.

The New York Post earlier reported that the Toronto-based company no longer claimed on its website that it sources coyote fur from animals in overpopulated areas, and had removed a video showing where it gets the down for its parkas. Canada Goose denied it made changes to its website in response to the regulatory review.

Shares closed at $58.89 in Toronto, after seven days of gains.

Canada Goose, known for its US$900 down jackets, has been facing a year-long Federal Trade Commission investigation for potentially false and misleading advertising about the treatment of geese whose down is used in its jackets. In a June 17 letter, the FTC said that it would not recommend any enforcement action given that the company had taken “prompt, corrective action” including removing the advertising claims at issue.

Canada Goose said it was “appalled by the gross mischaracterization” of its long-standing ethical sourcing standards for its clothing.

“The changes to our website were not made at the behest of the FTC, and the FTC did not reach any conclusions regarding whether any prior statements were misleading,” the company said in a statement in response to the Post article. “Our website reiterates our commitment to the ethical sourcing and responsible use of all animal materials. Any inference to the contrary is false.”

Animal rights organization People for the Ethical Treatment of Animals Inc. said the FTC was responding to its complaint about Canada Goose’s marketing practices.

“PETA urges shoppers to look behind Canada Goose’s humane-washing and see the suffering in the stitches of its coats,” it said in a statement Thursday.