Fourteen months after Canada Goose Holdings Inc. Chief Executive Officer Dani Reiss said the company was rising like a “rocket ship,” a growing number of investors are betting its shares are earthbound.

Shares have fallen after each of the past four earnings reports, and the stock lost 17 per cent last year. That’s turned the US$1,000-parka company into a magnet for short sellers who would profit if the shares decline further.

Bulls see the Toronto-based company’s foray into lighter apparel, like sweaters and rain coats, and its entry into new markets as evidence that there’s still plenty of market to tap. Bears, however, worry about inventories piling up, slower sales growth, and unpredictable profit margins. This makes 2020 a key year for Canada Goose. If there’s a time for the company to refresh its image with investors, it’s now.

“Canada Goose is still a relatively small brand, with about two thirds of its sales in North America,” Bloomberg Intelligence analyst Maxime Boucher said. “It must use the next few quarters to establish itself as a top global luxury player.”

While the company is expanding in Asia and Europe with new flagship stores and country-focused websites, its inventories are swelling --raising questions about whether production is outpacing demand. Canada Goose needs to bring them back to more normal levels soon “to reassure investors that its brand remains hot and suited to a luxury model of limited supply,” Boucher said.

This is being closely watched by the markets, as evidenced by analysts’ disagreement last month on whether discounts were deepening on Canada Goose parkas. Markdowns are rare for luxury companies that rely on scarcity and cachet to get shoppers to pay full price. 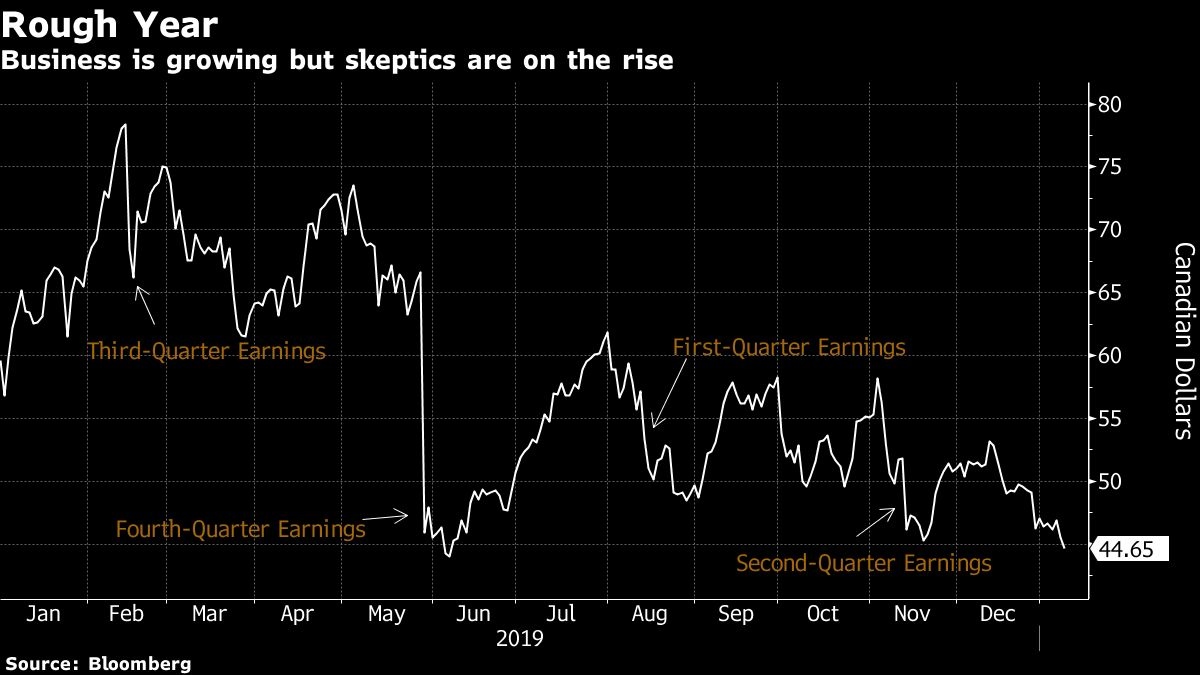 “People seem to think that it’s Moncler 2.0,” said Brian McGough, a managing director at research firm Hedgeye who’s recommended shorting the stock since May. “It’s not. It’s a completely different business model in every way, shape, and form.”

McGough said brands like Moncler keep demand high by limiting the supply of merchandise. Canada Goose, in contrast, produces as much as it can and assumes the market will absorb it, which increases the chance that goods will ultimately need to get discounted, he said.

A slew of new products, such as US$500 hoodies, elevates that risk, according to McGough, who sees outdoor-gear maker Columbia Sportswear Co. as a better-suited comparison for valuation. Columbia trades at about 21 times earnings.

Canada Goose U.S.-listed shares have a total of about 15.6 million with short positions -- more than triple the levels at the start of 2019, according to financial analytics firm S3 Partners LLC. That’s more than a quarter of the company’s float, and all together represents about $545 million of its market capitalization, said Ihor Dusaniwsky, S3’s head of predictive analytics.

Despite the rise in investors betting against the shares, Canada Goose’s business remains healthy. The company expects growth of at least 25 per cent for profit and at least 20 per cent for revenue this fiscal year -- an enviable pace in the struggling retail sector. Ten analysts recommend buying the stock, against four hold ratings and one sell.

The six-decade-old company with the North Pole crest logo is relying less on wholesalers by selling directly to consumers. Despite protests in Hong Kong, sales in China almost doubled last quarter.

“Brand integrity remains intact in our view,” Evercore ISI analysts led by Omar Saad wrote in a note to clients last month, after finding no signs of meaningful discounting on the ground.

Increased scrutiny over Canada Goose’s use of coyote-fur trim, and ongoing protests against it, has also weighed on the stock. But part of last year’s drop seems to be a self-inflicted wound that’s related to executives failing to communicate clearly.

Canada Goose’s earnings projections, for example, have repeatedly proved to be conservative in the past, leading investors to expect markedly higher numbers. So last May, when fourth-quarter revenue missed analysts’ average estimate for the first time since the company went public in 2017, the stock tumbled 31  per cent .

Then in November, shares reversed gains and fell when the company said that wholesale revenue would decline by a percentage “in the mid-teens” in the third quarter -- traditionally the most important period. The company said the drop could be attributed to some orders being fulfilled earlier in the season. At the same time, a 61 per cent  jump in inventories exacerbated investors’ concerns.

“Demand remains exceptional, but communication leaves our feathers ruffled,” Susquehanna Financial Group analyst Sam Poser wrote in a note to investors at the time. “While management excels as operators, poor communication with the Street is weighing on the stock,” he said.

Canada Goose’s Reiss sought to dispel concerns on the November call by noting that the timing of wholesale shipments varies every year and is unrelated to underlying demand. The inventory bump is related to a plan to maximize production efficiency as the company brings more of the manufacturing in-house, he added.

Even so, the company’s stock has fallen about 15 per cent since and short positions rose quickly in November.

--With assistance from Janet Freund and Joshua Fineman.