Canada Goose Holdings Inc. fell on Wednesday after saying that unrest in Hong Kong hurt its business there and that wholesale revenue will decline this quarter. Earlier, the stock had risen, bolstered by sales in Asia.

• The Toronto-based company cited “standout performances in Asia” during last quarter in its statement, but the follow-up comments about Hong Kong sparked a reversal in the shares. Despite the disruptions, demand in China remains strong, the company said.

• Investors also reacted to a forecast that third-quarter wholesale revenue would decline “in the mid teens,“ as some orders were fulfilled earlier in the season this year. That drop doesn’t mesh well with a 61-per-cent jump in inventory that Canada Goose says it’s building up as a buffer to maximize production efficiency. Reiss said there’s no risk of excess because most of the inventory is carried over year after year and sold at full price.

• Canada Goose posted strong sales growth in the U.S., where it has faced increased scrutiny since going public over the use of coyote fur in its parkas. California became the first U.S. state to ban fur sales in October, with legislation to take effect in 2023.

• Management has moved to broaden its offerings beyond winter products, adding items such as rain gear and lightweight jackets. The company acquired bootmaker Baffin Inc. for $32.5 million late last year to begin building a footwear business under the Canada Goose name.

U.S. shares of Canada Goose fell as much as 11 per cent, the most intraday in more than five months, to US$34.68 in New York. They had lost 11 per cent this year through Tuesday’s close, compared with the 22-per-cent gain in the S&P 500 Retailing Index. 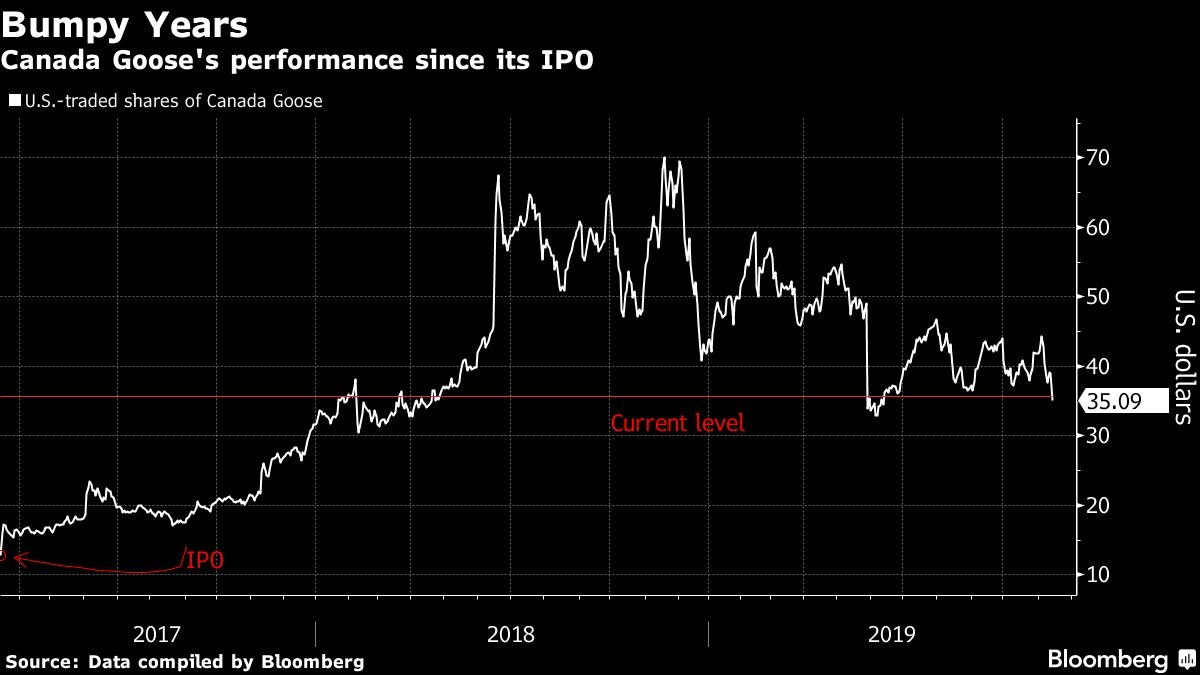 --With assistance from Janet Freund and Cécile Daurat.