Shoppers loaded up in Halifax, rolled giant joints at a “Wake ’n Bake” in Toronto and racked up a 100 online orders in a minute in Manitoba, as Canada became the first Group of Seven country to legalize recreational marijuana, giving it a massive head start in global pot market some peg at US$150 billion.

Stores in St. John’s, Newfoundland were the first to sell recreational cannabis, followed by more than 100 outlets and websites opening across the country of 37 million people. It’s an historic moment for an industry that has rapidly moved from the fringe to the mainstream.

“I’m super happy, this is an historic day for Canadians and for the world because we’re really setting a precedent here," said Isaac Langille outside a store in Halifax, where he bought the legal limit of 30 grams, spending $344 on products from Aphria Inc. and Organigram Holdings Inc.

Canada is the second country in the world to legalize recreational pot nationally after Uruguay. As a result, it has become the front-runner in the global cannabis industry, expected to reach US$32 billion in consumer spending alone by 2022, according to Arcview Market Research and BDS Analytics. The entire global market, meanwhile, could eventually be worth US$150 billion, according to estimates from Roth Capital Partners.

“The eyes of the world are on Canada and Canadians should feel very proud, because people have been fighting for decades to make this moment a reality,” said Brendan Kennedy, chief executive officer of Tilray Inc., the largest cannabis company by market value.

After running up dramatic gains in the lead-up to legalization, cannabis shares failed to join the party Wednesday. Aurora Cannabis Inc. had slumped as much as 15 per cent by 10:17 a.m. in Toronto for the worst drop since February, before paring losses. Canopy Growth Corp. was down 3.4 per cent at 1:15 p.m. and Tilray Inc., the world’s largest pot company by market value, fell 6 per cent.

Medical marijuana has been legal in Canada since 2001 but it’s only been about four years since the first cannabis companies began to list on Canadian exchanges. In that short time, about 140 pot companies have gone public in Canada, with a combined market value of more than $60 billion.

Alicia Wright, 38, was the first customer to buy pot at the NSLC Cannabis store in Halifax, Nova Scotia shelling out about $45 for 3.5 grams of pot and a grinder. The lineup was about 130-people deep by the time the store opened at 10 a.m. local time and the mood festive as a store manager walked down the line telling everyone to have ID ready.

“I was happy to see vaporizers here because I know that combustion is really maybe not the top choice for a lot of people, so there’s a variety of ways to consume,” Wright said. She’s hoping to see more variety in the future. “I’ve benefited from oil, so I was hoping that would be an option today. It’s not but I know that it’s coming."

Beverley Ware, spokeswoman for the Nova Scotia Liquor Corporation, which oversees cannabis sales in the province, said stores had only about 40 per cent of the inventory they’d been anticipating. About 106 products had been sourced and the government had expected 282 for opening day. 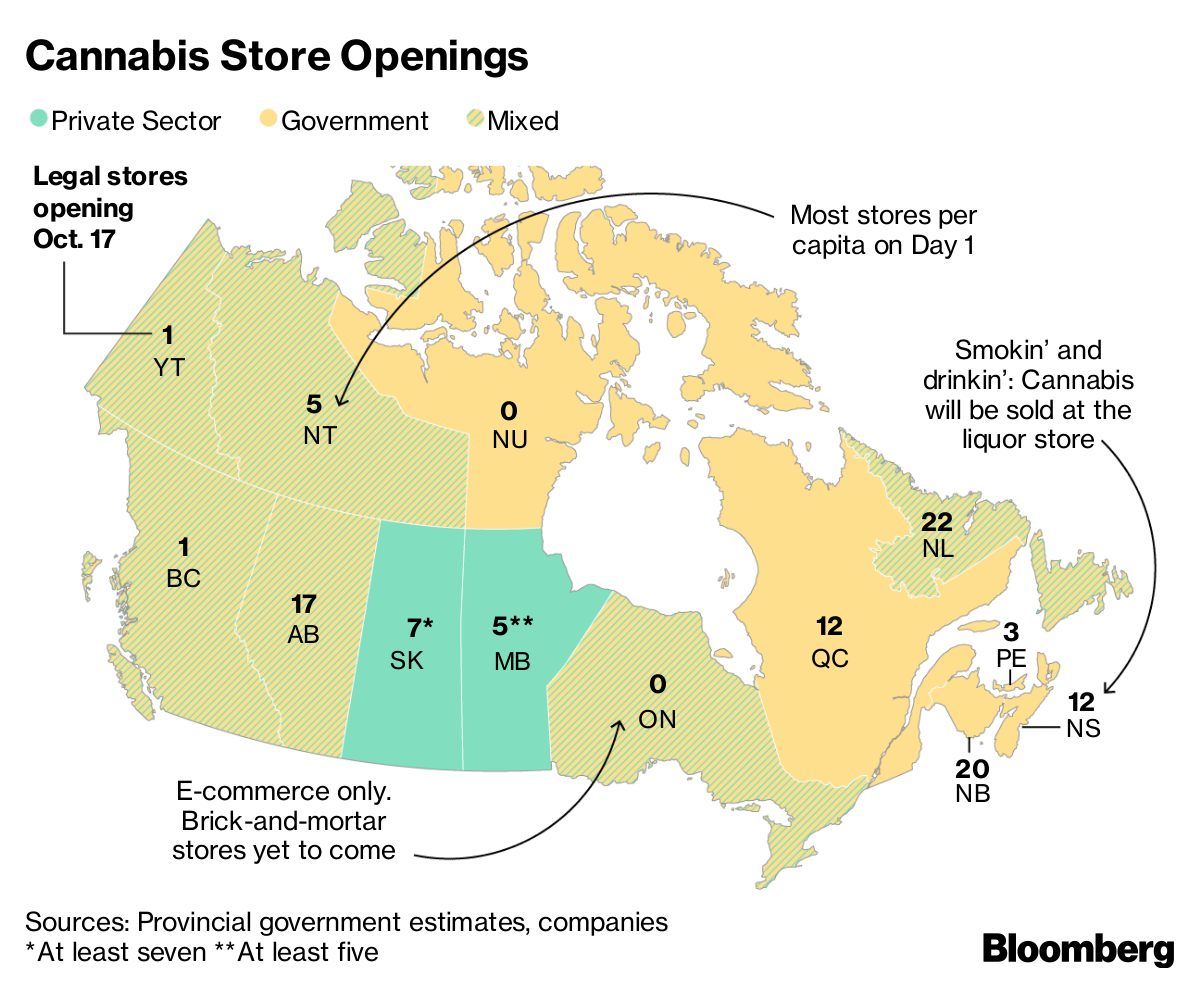 “We’ve accomplished our mandate," said Robin Ellins, co-founder of the retail store. “Friendly Stranger was created as a vehicle to educate and raise awareness of cannabis issues to bring about legalization."

Alex Gore, 28, a glass blower rolled a huge joint as the gathering started. “I hit the bong before I left and got on the train this morning," he said. “I’ve been prepping for 16 years.”

In small towns like Smiths Falls, Ontario, home to Canopy Growth Corp., executives and employees were to celebrate together.

In Quebec, the Societe Quebecoise du Cannabis, plans to offer about 110 products at the dozen stores that are ready for Day 1. The number of locations could grow to as many as 150 within three years, the company estimates.

The stores are selling pot for only $5.29 a gram, said Alain Brunet, CEO of the liquor control board that is overseeing the industry.

In Manitoba, security guards were directing traffic in the parking lot at Delta 9’s south Winnipeg store, where some eager customers had been lined up since Tuesday evening. The company’s online sales started at midnight, and some products have already sold out, said spokesman Gary Symons. Initial demand was so strong the online portal recorded 100 sales in the first minute and 500 sales in an hour, totaling $50,000. 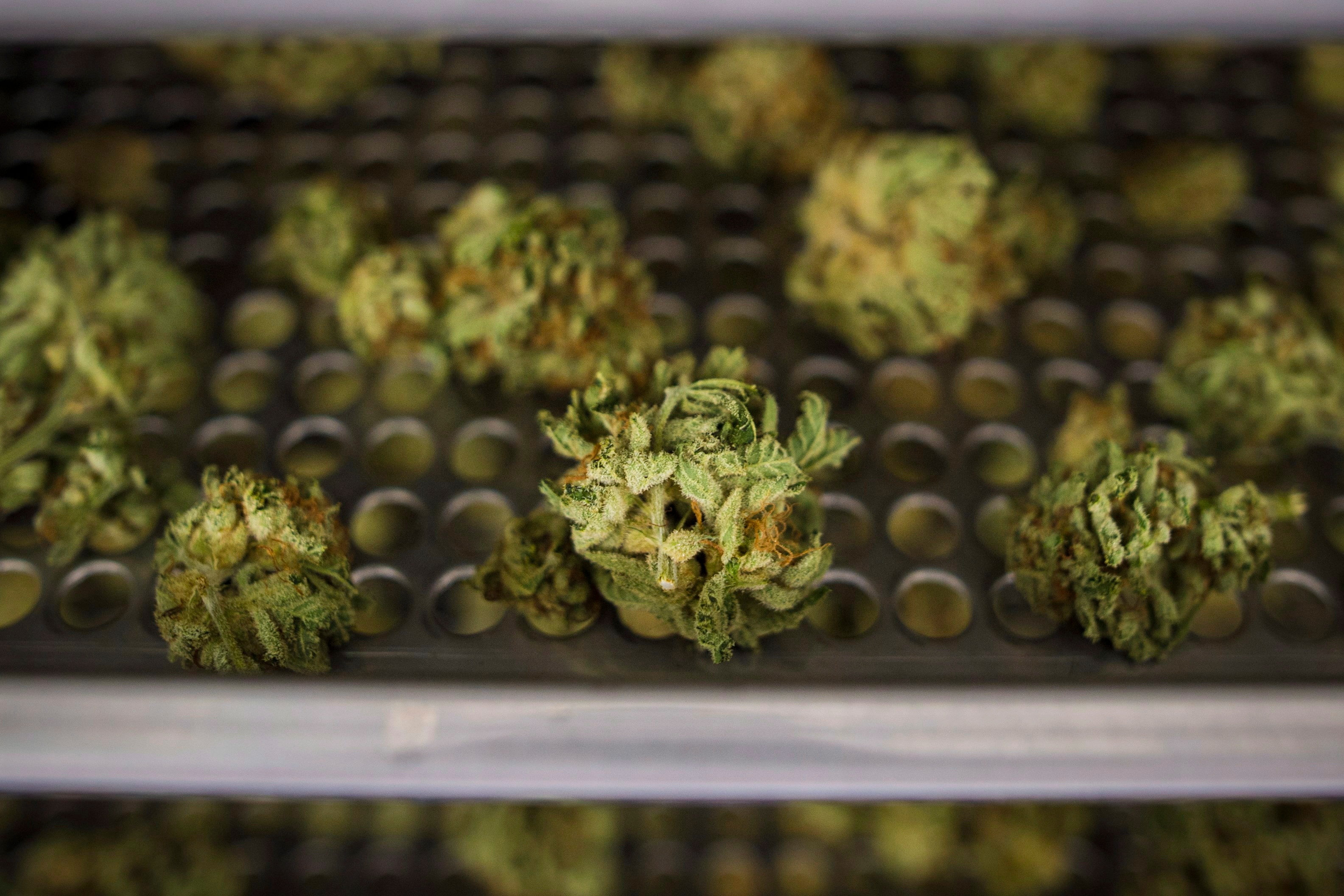 Thirty-four year-old Steven Stairs was the first to line up outside the storefront on Tuesday evening at 6 p.m. For the medical user, who is legally blind and has been consuming cannabis for a decade to treat glaucoma and cataracts, the first day of legal sales signals a shift for Canada and society.

"I’m extremely elated," said Stairs, who slept outside in the below-freezing temperatures with provisions including a tent, sleeping bag and marijuana. "I’m very grateful this happened in my generation."

Because cannabis remains federally illegal in the U.S., Canada’s investment bankers do most of the industry’s deals and its stock exchanges list most of the industry’s stocks. This has been a boon for the country as cannabis stocks have rocketed higher, drawing comparisons to cryptocurrency and the dot-com bubble. Since Canopy Growth announced a US$3.8 billion investment from alcohol giant Constellation Brands Inc. in mid-August, investors have piled into the sector, sending the Horizons Marijuana Life Sciences Index ETF up by 70 per cent.

Still, the rollout of legal cannabis sales isn’t expected to be totally smooth. Aphria Inc. CEO Vic Neufeld said he expects supply shortages in the early stages of adult use as licensed producers struggle to meet demand. Only a handful of retail locations were up and running on Oct. 17, including just one store in British Columbia and none in Ontario, Canada’s most populous province where only online sales will be allowed. And the black market is expected to stay in business, as the supply of legal pot will meet only 30 per cent to 60 per cent of demand after legalization, according to a study by researchers at the University of Waterloo and the C.D. Howe Institute.

“For day one, I think we’re going to be okay,” said Marcie Kiziak, Alcanna’s cannabis division managing director at the Nova Cannabis store in Edmonton, Alberta. “After that no one really knows."