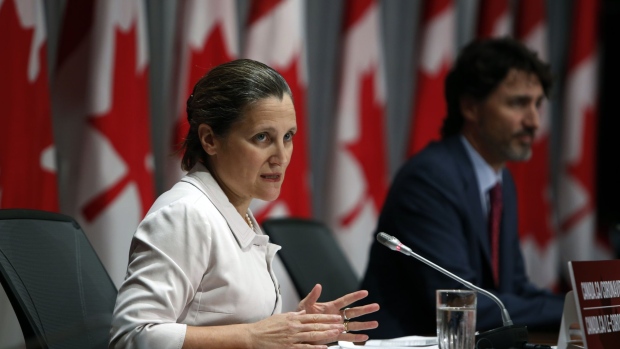 At a press conference in Ottawa, Deputy Prime Minister Chrystia Freeland released a list of more than 60 U.S. aluminum-containing products that could face higher tariffs, but vowed not to escalate the situation beyond what she said was a dollar-for-dollar equivalent duties, totaling C$3.6 billion ($2.7 billion) in goods. She also branded Trump’s administration as the most protectionist in U.S. History.

“These tariffs are unnecessary, unwarranted and entirely unacceptable,” Freeland told reporters in Ottawa. “Canadian aluminum is in no way a threat to U.S. national security, which remains the ostensible reason for these tariffs, and that is a ludicrous notion.”

Freeland said the decision would only hurt American consumers and she hopes the U.S. will reconsider the tariffs. Canada’s countermeasures will come after a 30-day consultation with companies and individuals, she said.

Canadian businesses and manufacturers are concerned about the tariffs, especially as the economy inches forward following the Covid-19 pandemic.

“It is a sad day when retaliatory tariffs are a necessary but regrettable response to baseless so-called national security tariffs from our closest ally,” Mark Agnew, senior director of international policy at the Canadian Chamber of Commerce, said in an email. “Canadian companies want to see sustained and aggressive efforts to rollback these tariffs and a minimization of the adverse consequences of our retaliation during this difficult economic period.”

According to Freeland, Canada’s aluminum industry employs more than 10,000 workers along with tens of thousands more in related sectors. Ontario Premier Doug Ford lambasted the tariffs on Friday, lashing out at Trump and encouraging Canadians to buy local products instead of U.S. goods in protest.

“We’re their closest ally, we’re supposed to be part of a big family and he comes and back stabs us like this? Unacceptable,” Ford told reporters in Toronto, adding he urged Freeland to take a strong stand against Trump.

Business executives are hoping the Canadian government can convince the U.S. to reconsider.

“I think it really was political so let’s hope that minister Freeland can convince her U.S. counterparts that this is detrimental to the already fragile economies on both sides of the border,” Dennis Darby, chief executive of Canadian Manufacturers and Exporters, said in a phone interview.