When the second lockdown came I had to pivot to an essential business: Tong Mein Restaurant owner

As Canada’s restaurants and hotels begin to fully reopen after months of lockdown, they will almost surely struggle to find replacements for the workers who left the industry during COVID.

But they may have an advantage over their U.S. counterparts who have been struggling with labor shortages: a federal wage-subsidy program that kept many service workers connected to their employers.

The sector accounts for 71 per cent of the 500,000 Canadian jobs that disappeared early in the pandemic and have yet to return. Now, as even the hardest-hit provinces make plans for phased reopenings beginning this month, they are confronting the fact that many of those workers have switched jobs or stopped working entirely, some executives in the hospitality and food-service industry say.

“A lot of them have left the industry, a lot have given up on waiting for jobs to come back,” James Rilett, a vice president at the Restaurants Canada industry association, said in an interview.

Policy makers expect that the employment numbers for May, to be released by Statistics Canada early Friday, will be the last weak reading for the labor market before reopenings begin en masse, setting off a hiring spree. Economists are predicting a job loss of 22,500, according to the median estimate in a Bloomberg survey, adding to a loss of 207,100 jobs in April.

Many provinces including Ontario, Quebec and British Columbia kept COVID restrictions in place for most of May as they tried to control a third wave of the outbreak. Now that more than half of Canadians have received at least one vaccine dose, new virus cases are declining and provinces are outlining phased reopening plans. Economists are predicting a healthy rebound in the second half of the year as businesses reopen and consumers get comfortable again attending in-person activities. 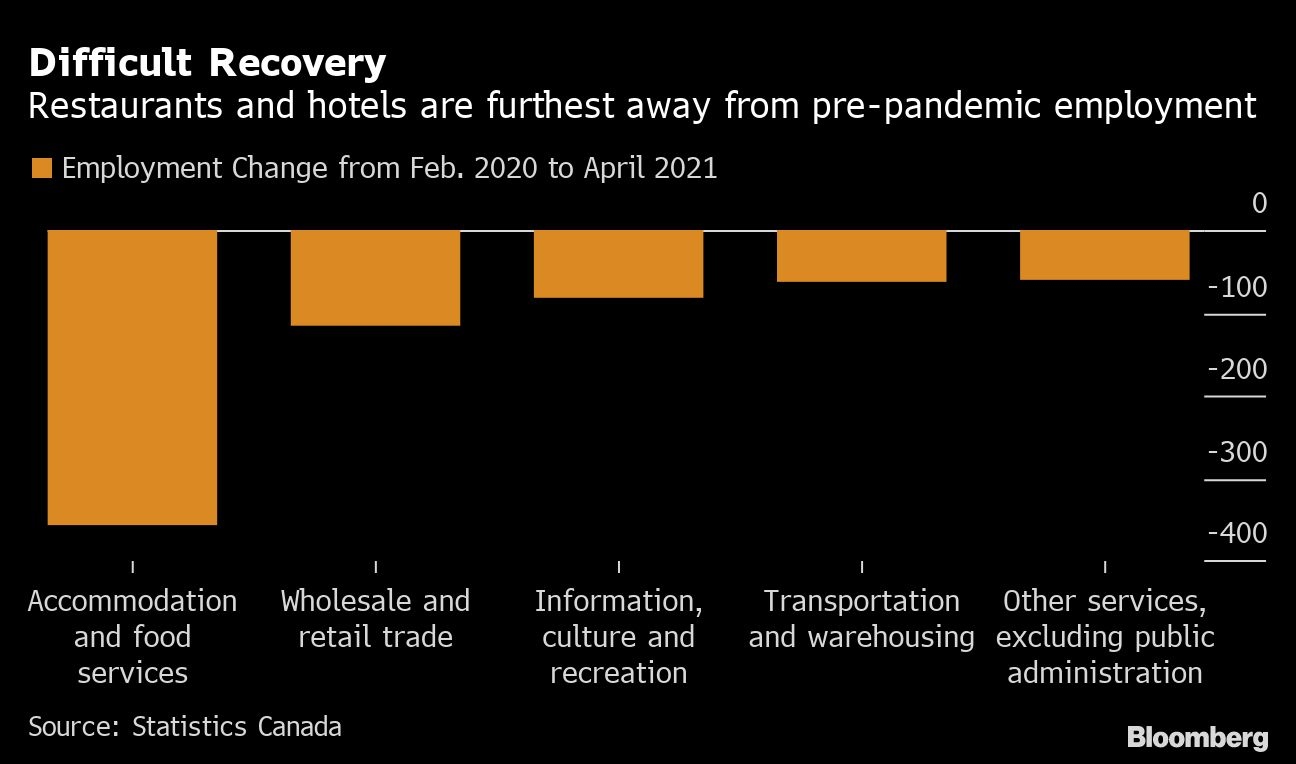 Hard-hit sectors in the U.S., which is well ahead of Canada in vaccinations, are already having difficulty staffing up. In April, the U.S. posted a disappointing jobs report, with companies saying they were having trouble finding workers because of ongoing virus fears, childcare responsibilities and generous unemployment benefits.

“Every time you close and reopen, you lose employees and it costs money,” Tony Elenis, chief executive officer of the Ontario Restaurant Hotel and Motel Association, said.

About 10 per cent to 15 per cent of hotels and restaurants in Canada closed their doors during the pandemic, Elenis said, adding that he thinks that figure would have been closer to 60 per cent if not for the government’s wage subsidy program. That subsidy is one key difference in how Canada doled out fiscal support compared with the U.S.

Research by Canadian Imperial Bank of Commerce suggests that the Canadian businesses that took advantage of the wage subsidy may have an easier time getting workers to return than their U.S. counterparts, largely because that support came directly from the government instead of through employers.

“A wage subsidy program that is aimed at keeping the employer-employee link intact might be more successful in motivating workers to return to work as opposed to a direct income support,” Benjamin Tal, deputy chief economist at Canadian Imperial Bank of Commerce, wrote in the May 26 report.

Tal says he expects that Canadian service-industry businesses will still struggle to find workers, if only because immigration has slowed to a trickle, compounding a labor shortage that predated COVID.

“That’s going to be the immediate problem, but going forward even before the pandemic hit we were having a labor shortage issue,” Rilett said. “We expect it will only be exacerbated by this long period of shutdown.”

There also appears to have been less scarring in Canada to start with than in the U.S., based on labor force participation rates. The rate in the U.S. is at 61.7 per cent in the U.S., down from 63.3 per cent before the pandemic. The decline in Canada has been less dramatic -- to 64.9 per cent from 65.5 per cent.

”It’s one area where Canada has done better,” said Frances Donald, chief economist at Manulife Asset Management. “For that reason, its likely we don’t see the same level of job shortages here in Canada as in the U.S. But we’re still likely to see mismatches in demand and supply of labor.”