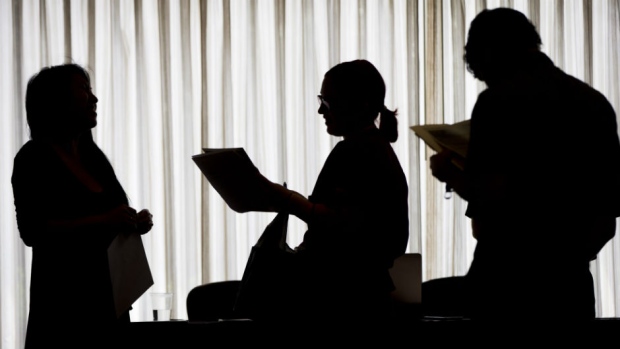 Silhouetted workers in an office , The Canadian Press

OTTAWA/TORONTO - Canadian work permits for highly skilled workers from the United States jumped in the first half as companies lured applicants with the country's calm political climate in the face of a raucous U.S. election.

Canadian immigration data showed new work permits issued to U.S. residents jumped 53.8 per cent in the first eight months of 2016 from the same period last year, though renewals were down.

Some companies see the heated U.S. presidential race between Democratic party candidate Hillary Clinton and her Republican rival Donald Trump as an opportunity to lure Americans to Canada, which has a stereotypical reputation for politeness.

Trump has called the North American Free Trade Agreement with Canada and Mexico one of the worst deals ever struck and blames it for manufacturing jobs being moved to Mexico. He has also pledged to build a wall on the border with Mexico to deter illegal immigration.

Clinton has offered a more tempered approach, saying she would seek to re-evaluate NAFTA if elected.

"We ran a huge ad campaign in the States, targeting expats, Americans - and it generated a lot of interest," said Christopher Reid, founder of Ontario-based software developer Sortable. "We used Trump as an anchoring point."

The ads, which ran in March and June, include one that featured a photo of Trump along with the message: "Are you thinking of moving to Canada?" Reid said he found two candidates he wants to hire.

"There is extra momentum right now ... that new appreciation for the values that Canada has around diversity and inclusion," Galt added.

Separate government data also showed permits for international students looking to attend Canadian schools jumped in the first quarter to 42,737, up 42 per cent from a year earlier. In the second quarter, student permits jumped 63 per cent, to 56,329.

In a survey conducted last winter, 60 per cent of potential international students said they would be less likely to study in the United States if Trump was elected.

Latin American students were especially concerned, and nearly 80 percent of Mexican students surveyed said they would be less likely to study in the country if Trump was president.

"Canada is a very attractive destination, it's tolerant, it's very diverse which is appealing to international students, it's stable, it's safe," said Richard Levin, executive director of enrolment services at the University of Toronto.