75-80% of jobs lost because of COVID-19 could come back by end of year: Economist

Canada’s labor market likely continued its comeback last month, but gains are slowing on the long road to full recovery.

Statistics Canada is expected to report that 365,000 jobs were added in July, according to the median estimate in a Bloomberg survey of economists. That would bring total jobs recovered to 1.6 million in the past three months, or just over 50 per cent of the 3 million lost in March and April.

While the employment gains will be welcome, economists have warned it could still take years before the labor market returns to pre-pandemic levels. Nor are the outcomes evenly spread.

Women, low-income earners, youth and immigrants have been hit harder and will take even longer to recuperate. On Friday, Statistics Canada will release jobs data by race for the first time that are expected to show minorities have been disproportionately hurt by the recession.

“We are going to see quite a lot of racial impact in who was hit hardest because low income often intersects with race and recent immigration status as well as gender and youth,” said Armine Yalnizyan, a research fellow at the Atkinson Foundation. 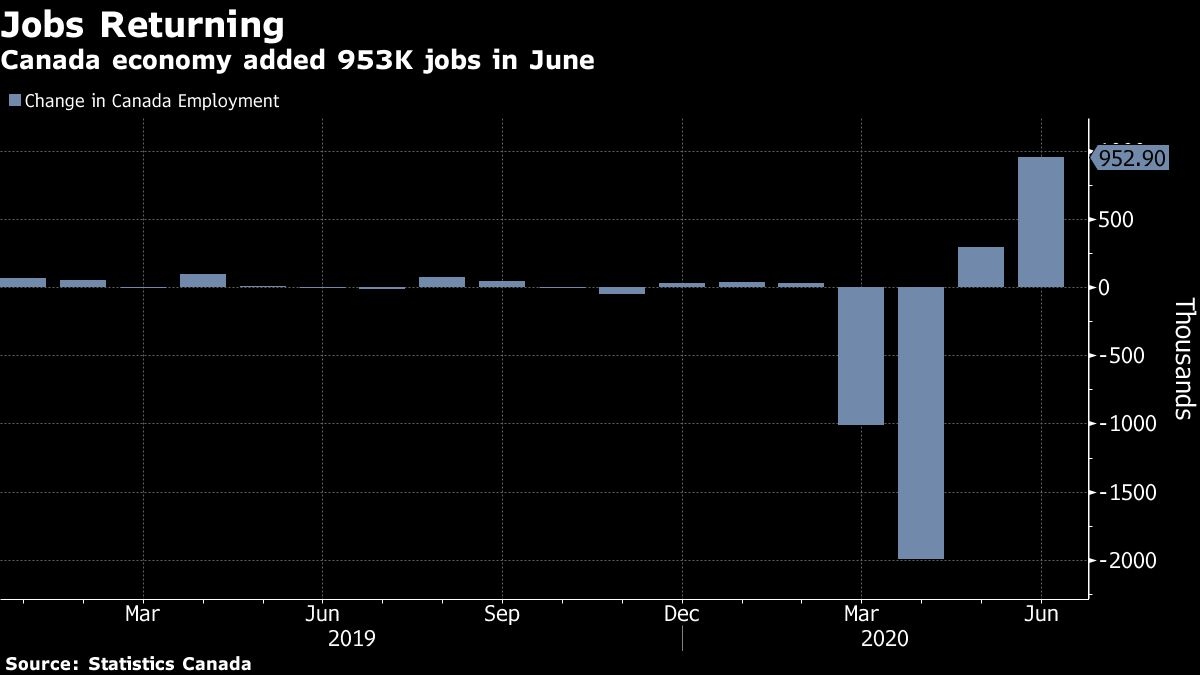 Separate polling is also showing a steady but gradual rebound. About 38 per cent of Canadians who either lost their job or were working reduced hours because of the pandemic were reemployed or working more, according to the latest survey by Nanos Research taken at the end of July for Bloomberg News. That figure falls to 33 per cent for women who lost jobs or hours.

Job-listing data from Indeed Canada show total postings last week were down 26 per cent from a year ago, an improvement from a nearly 50 per cent gap three months ago.

For some companies, the problem isn’t creating jobs but getting workers to come back to them. Survey data from KPMG suggest more than half of Canadians are afraid to return to the workplace because of Covid-19.

In lower-paying industries, there’s also a financial challenge. The federal government’s Canada Emergency Response Benefit (CERB) pays C$2,000 (US$1,505) per month to people affected by the pandemic. That’s similar to or more than what some part-time workers can earn in a month.

“I’ve been hearing from a lot of employers that they have a tremendous amount of jobs available and people just aren’t coming back to work because of the CERB. That’s concerning,” Ontario Premier Doug Ford said at a news conference Thursday.

For Friday’s jobs report, all 14 economists surveyed are predicting gains in July, as provinces continued their reopening plans. The labor force survey was taken between July 12 and July 18, just as Ontario was loosening another layer of restrictions on business and public gatherings.

But there’s a lot of uncertainty around the number, with the range of forecasts varying from 130,000 to 900,000. Economists see Canada’s jobless rate dropping to 11.2 per cent in July, from 12.3 per cent in June and 13.7 per centin May, which was the highest on record going back to the Great Depression.

Unlike the Bureau of Labor Statistics in the U.S., Statistics Canada’s monthly labor force survey had never tracked employment conditions by visible minority status up until now. In the U.S., which has been collecting race data for years, White Americans have been showing a quicker pace of COVID-19 job recovery than Black Americans.